In the morning I quickly ate a sesame seed wreath with Ayran, removed the thermo-lining of the motorcycle clothing, freed the motorcycle from the dust of the past week, strapped down the luggage and nothing more stood in the way of the departure.
The plan was first of all to drive along the Marmara Sea to the Turkish west coast near Canakkale, then to visit some historical excavation sites in southern direction and from there via Izmir, Pamukkale and Konya to the east, into the Anatolian highlands. 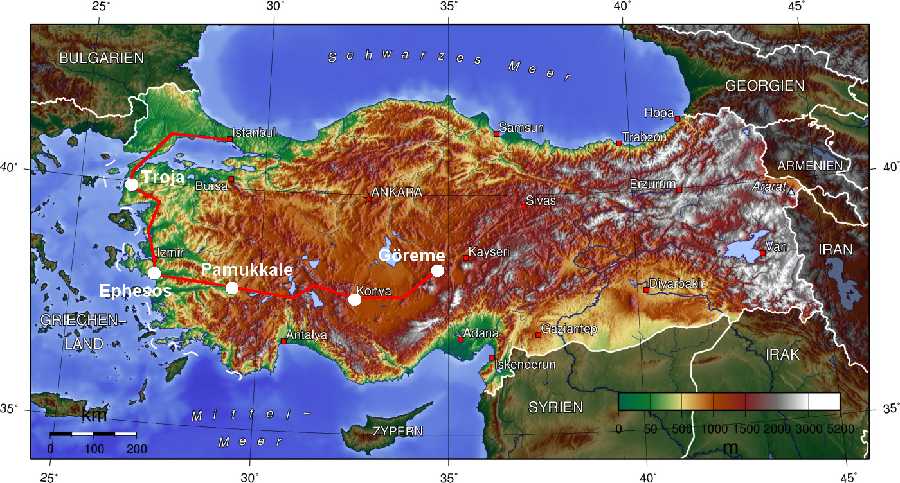 The journey under time pressure from Graz to Istanbul was a constant acceleration, overtaking and braking. Apart from the fact that this was not the most economical way of driving, it was also very exhausting.
The astronomical fuel costs and the pleasant time cushion therefore led me to the decision to limit the cruising speed to a maximum of 100 km/h for the time being until Baku.
Since I usually like to travel fast when the conditions are right, this will be a serious challenge – a private personality development seminar on 2 wheels, so to speak.

At ½ 8 am the traffic in Istanbul is still bearable, only one hour later the usual traffic jams start. Finding the right way was no problem, with moderate speed we started towards the first breakdown. The chain had already broken after one hour of driving, after rolling out on the 2-lane highway it had to be found and picked up again between the thundering heavy traffic. The good piece could not be repaired on site. So we took out the spare chain, mounted it on the hard shoulder and after 1 hour back on the road.
Along the coast of the Marmara Sea a hardly used gravel road leads between the cliffs in southern direction. Beside the incomparable view this was also the first opportunity to test the driving behaviour with 70 kg (rucksack, pack roller, off-road tyres and 2 aluminium suitcases) rear load on unpaved ground. 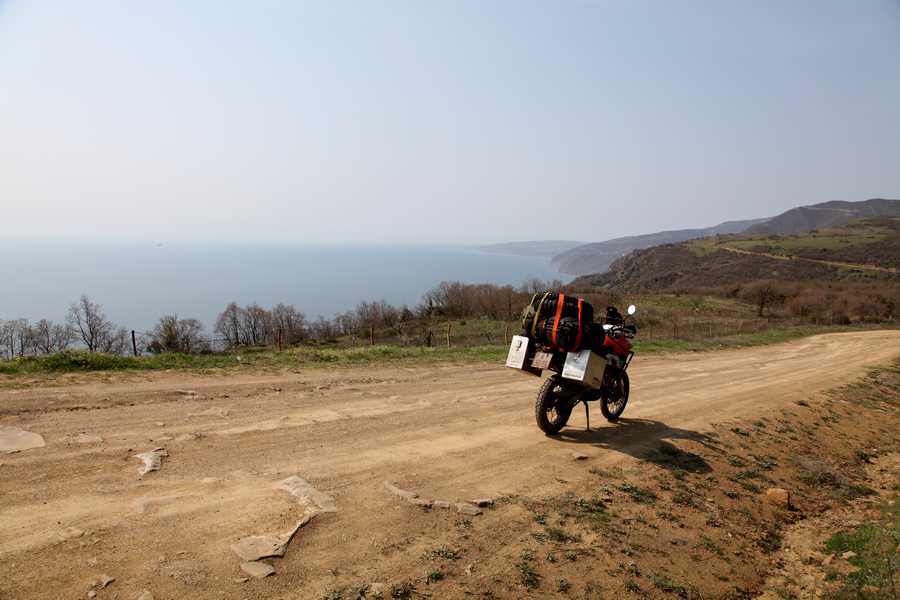 The payload shifts the vehicle’s centre of gravity to the rear and therefore causes an almost uncontrollable roll along the longitudinal axis even on normal road surfaces at low speeds. This effect is even more pronounced on gravel. However, when driving faster and standing still, it is still possible to apply enough pressure to the front tyre to achieve a reasonably stable forward motion. Unfortunately I had still put on the road tires at this time, so a real test with higher cornering speeds was not possible. But there should be opportunities to do so from Turkmenistan at the latest.

On April 11th at about 14:00 near Canakkale the geographical Europe was probably finally left for a longer time. 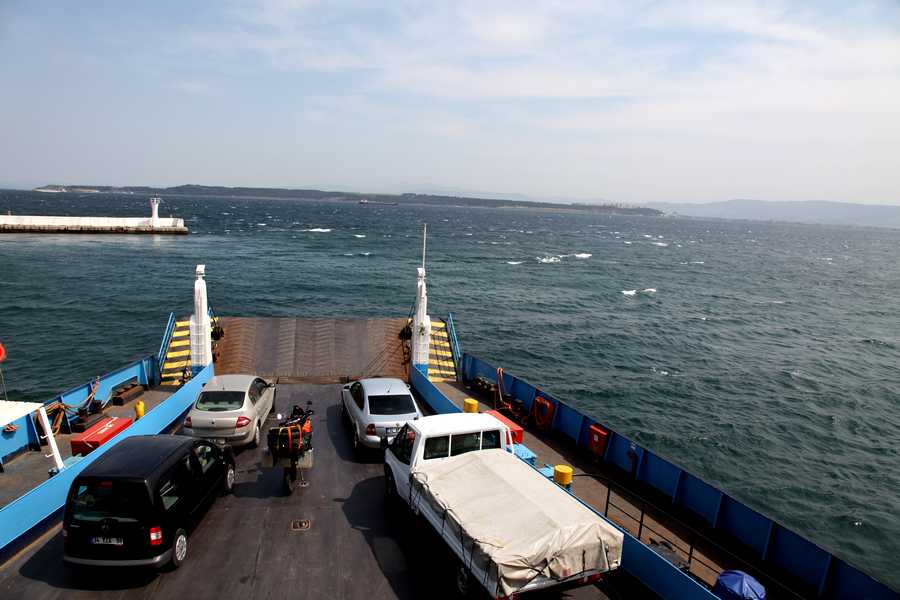 The first stop in Asia was Troy – the city of King Priam, the beautiful Helen and Paris, destroyed under the leadership of Agamemnon, supported by Ulysses and Achilles. The ancient Greeks with their ships and warriors were responsible for the sinking, today it is the buses with hordes of currency-bringing Japanese, Spaniards or Germans that cause a comparable chaos in what is left.
A picture, by the way, that will be repeated continuously at all historical sites and other places of interest along my route up to Göreme in Central Anatolia. 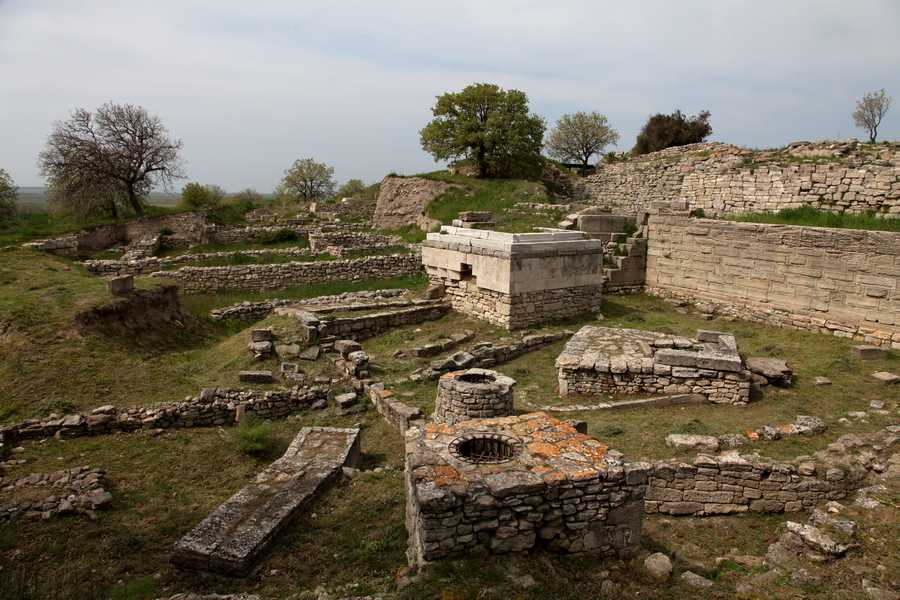 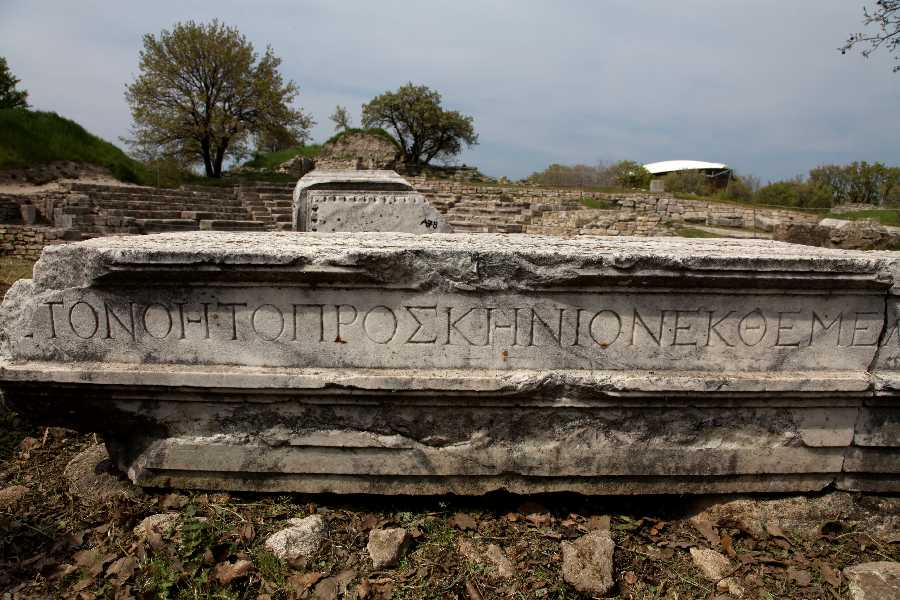 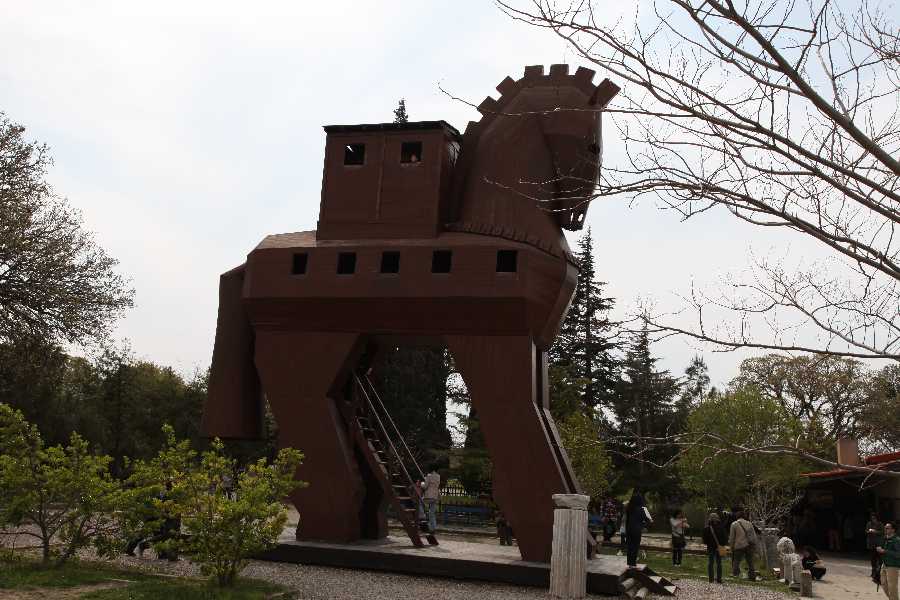 I continued to Ephesos, one of the most important and oldest ancient Greek cities in Asia Minor. Birthplace of Heraclitus and Xenophon, under Roman rule one of the biggest cities of the empire with 200.000 inhabitants – the well preserved amphitheatre, temples and boulevards bear witness to the glory of days gone by.
Ephesus at Wikipedia 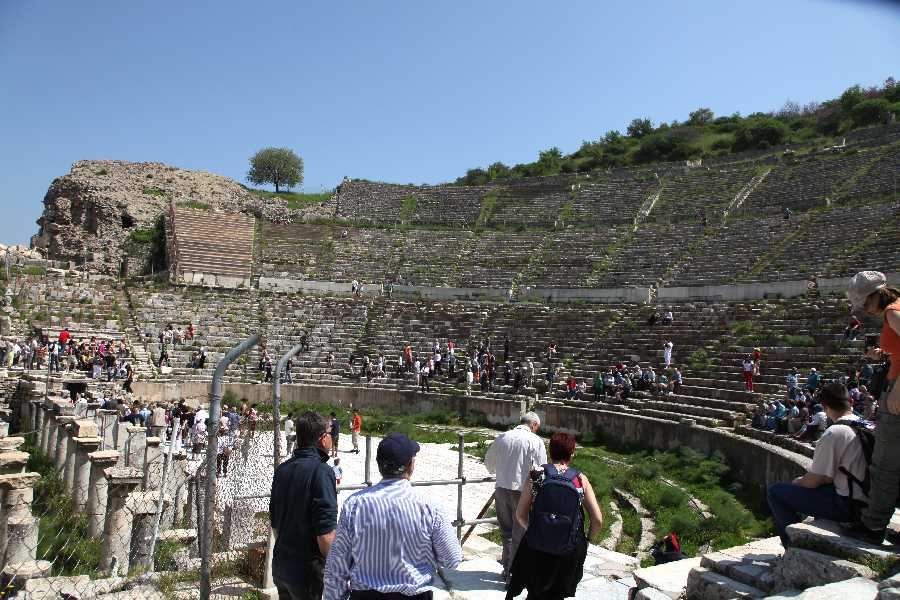 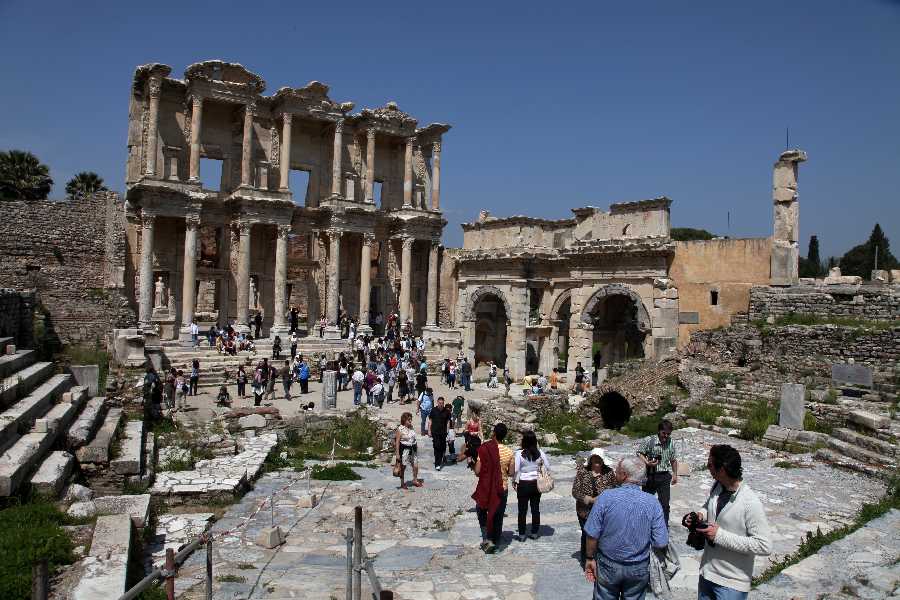 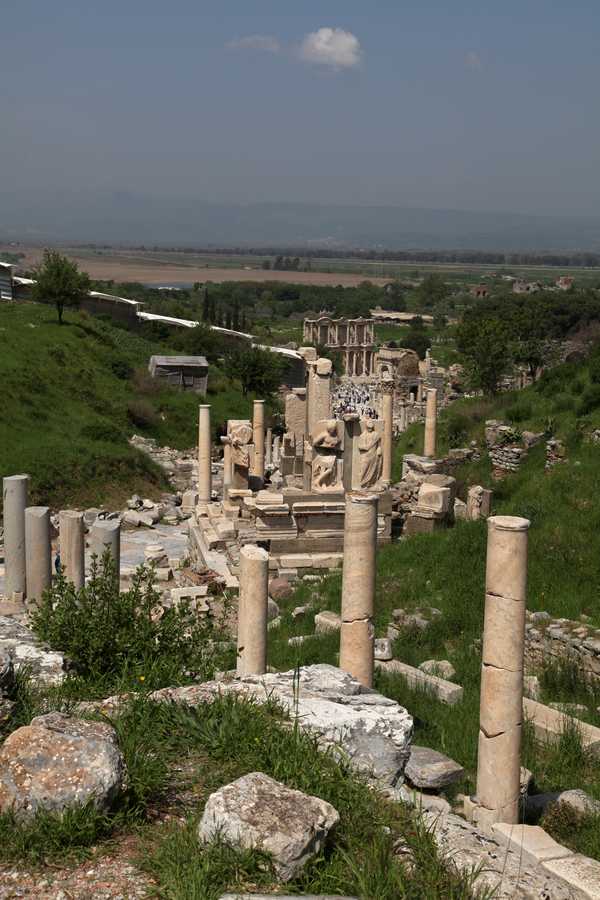 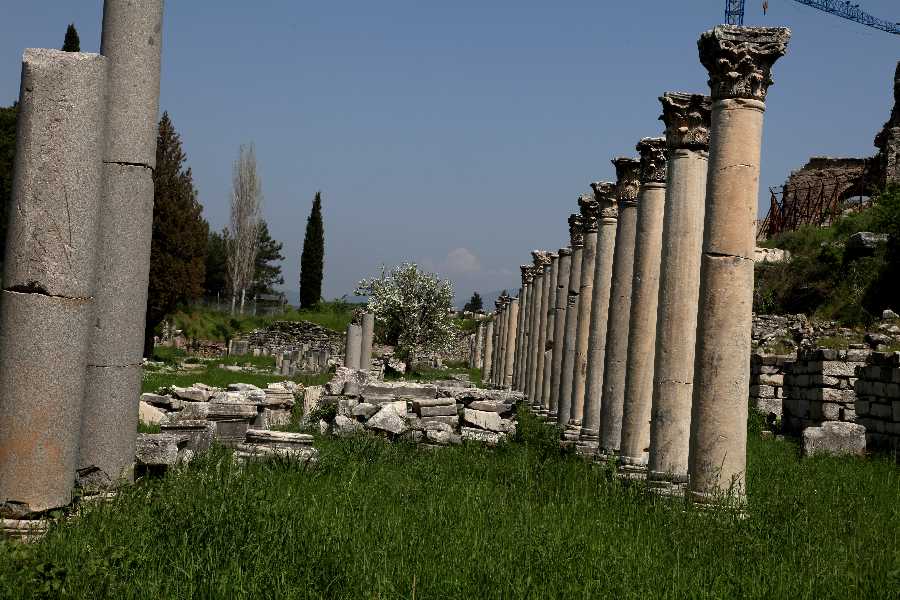 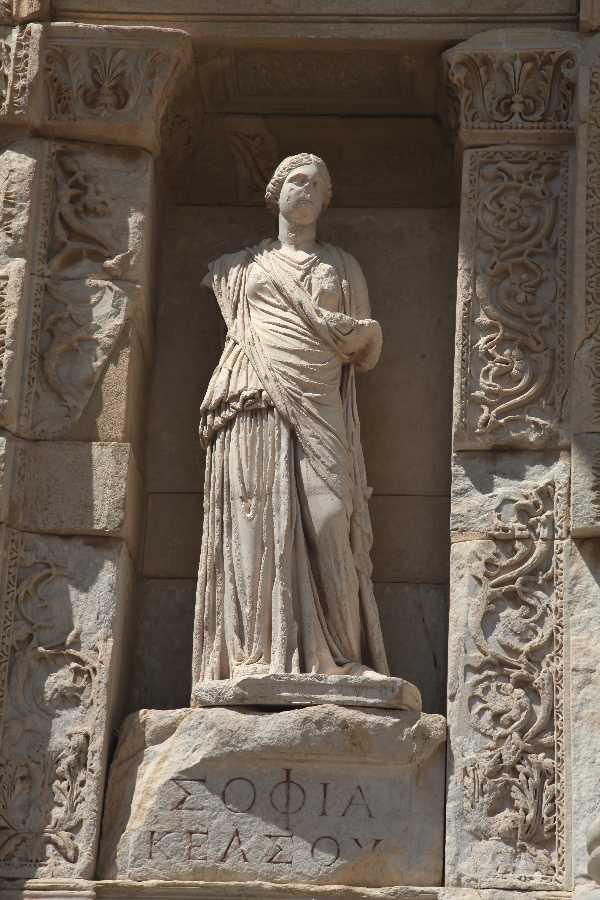 So far I could be very proud of myself, because I had actually always kept to the voluntary speed limit. The more astonishment sat all the deeper as I was stopped at the first radar control with measured 90 Km/h and the officials explained to me that in Turkey 70 Km/h are valid for motorcycles – what I really didn’t know up to this time. After some discussions they let me go with a warning, I probably got the tourist bonus. When about half an hour later the same thing happened again, a feeling of invulnerability crept in to my already well-known resistance to learning about speeding. No matter how fast I drive, nothing will happen to me.
This lasted exactly so long until I met the next control, which could not be talked to anymore – that meant about 100 € for nearly 10 Km/h of excess cash on hand – the height seems to me ideally adapted to the price of gasoline. The policemen also left the choice to pay an approx. 30% higher penalty within one month. Briefly I had played with the thought to take the ticket and not to pay. But since all personal and vehicle data were recorded electronically when I entered Turkey, I would probably have gotten into trouble at the latest when I left for Georgia.
The following 70 km/h to Pamukkale, which was easy on the bank card, was exhausting, but with 4 further counted controls on the next 150 km at least it made sense. In addition, on this day also still the crash bar broke, which had to be removed, welded and reassembled on it.
My hotel landlord in Pamukkale, to whom I had told later about this incident with the police, gave me the tip to give simply gas at further controls and to drive through with high speed. The Turkish policemen were too lazy for a car chase. Whether this is the case, I do not know. In any case, it is worth considering. 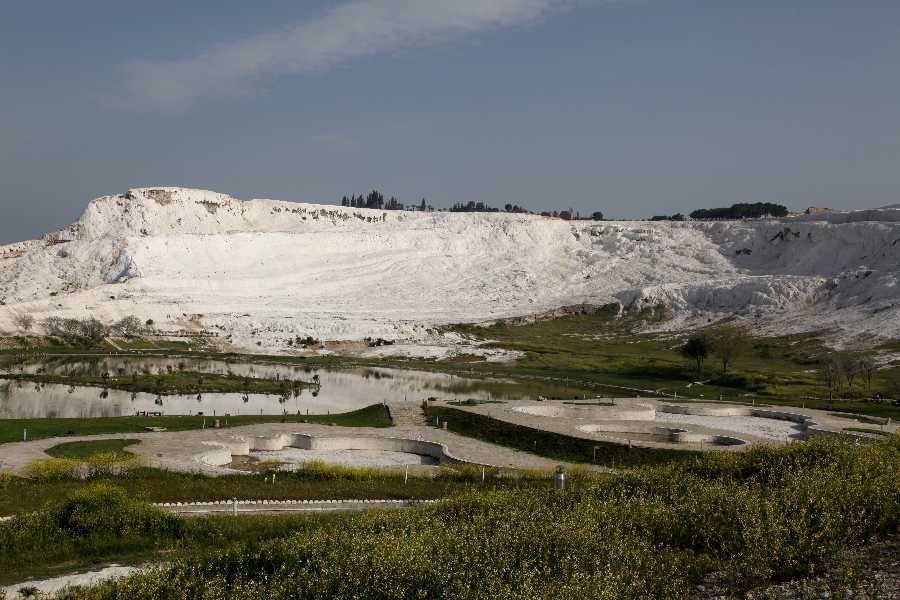 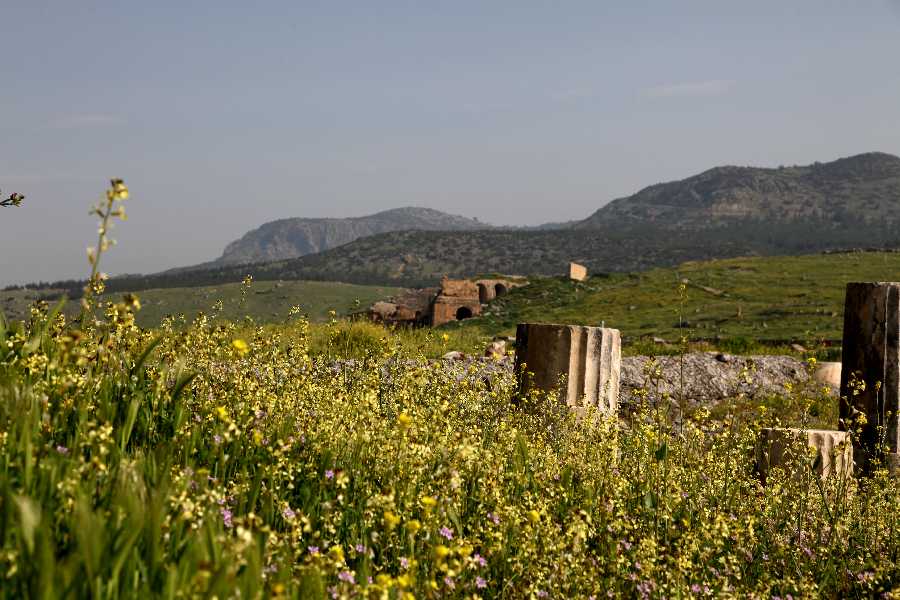 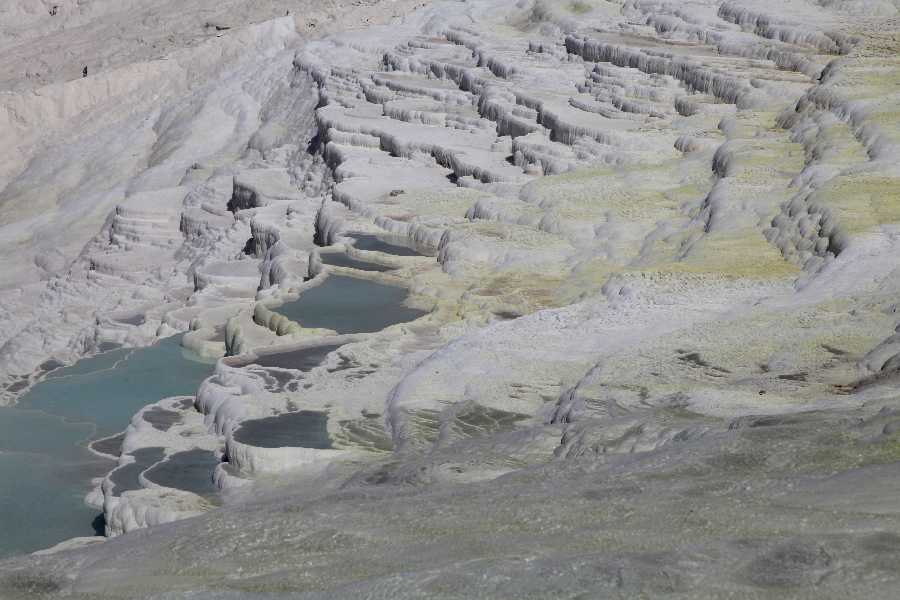 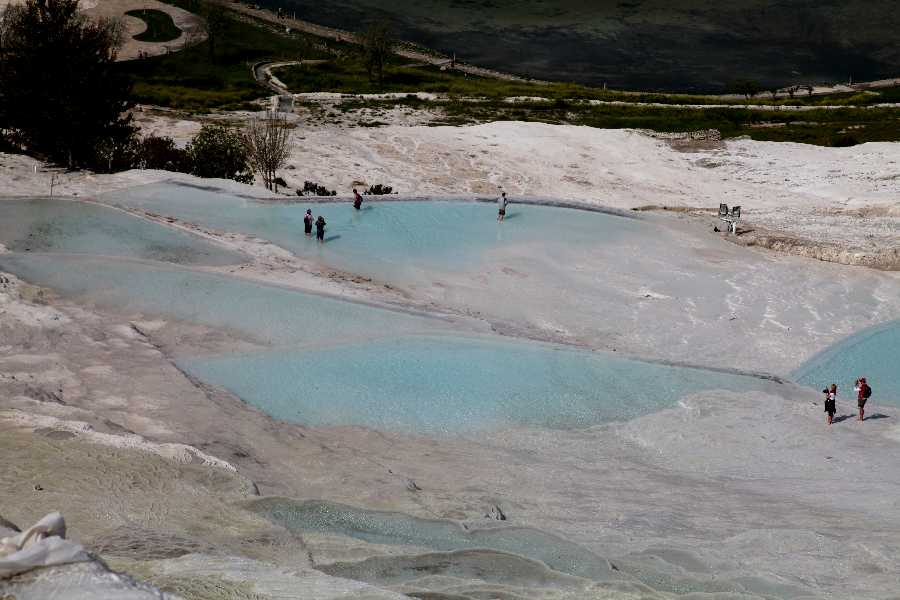 Having digested the shock of the first punishment I went again with my 100 Km/h to Konya to the Mevlana monastery, 400 km straight ahead to the east. 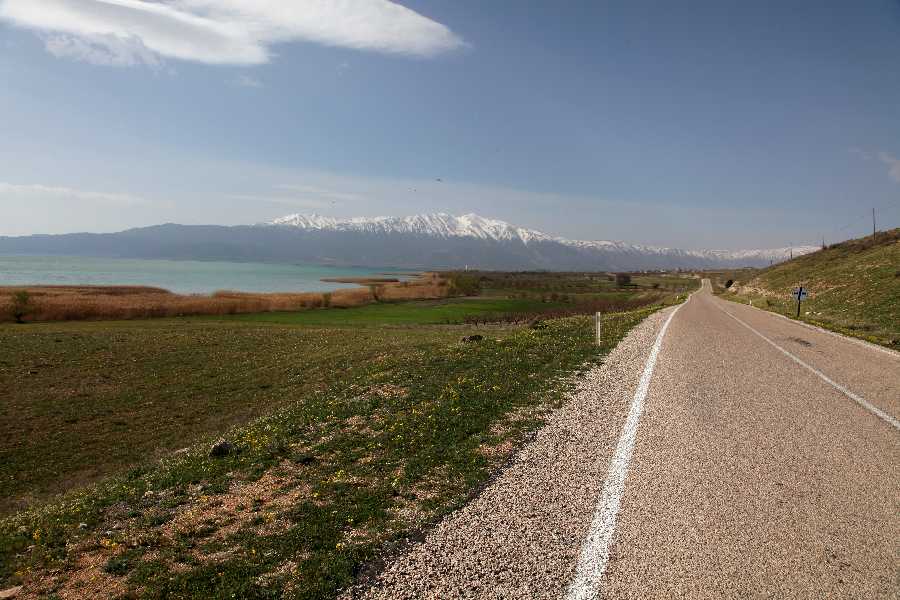 Beautiful landscape on the way through West Anatolia

The monastery itself is now a museum, unfortunately photography is prohibited there.
As you can see, I was still able to take some pictures from the hip until the wardens noticed this and politely complimented me out. 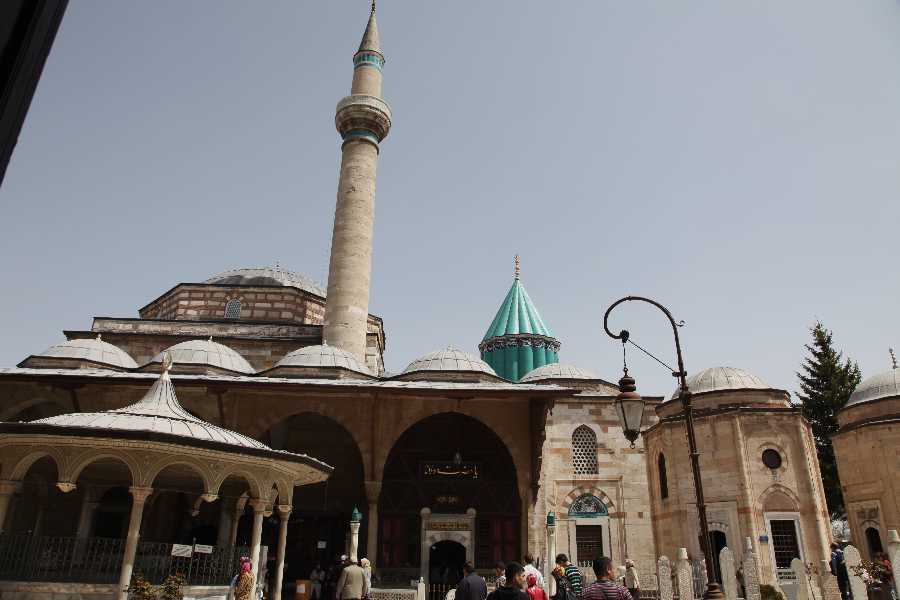 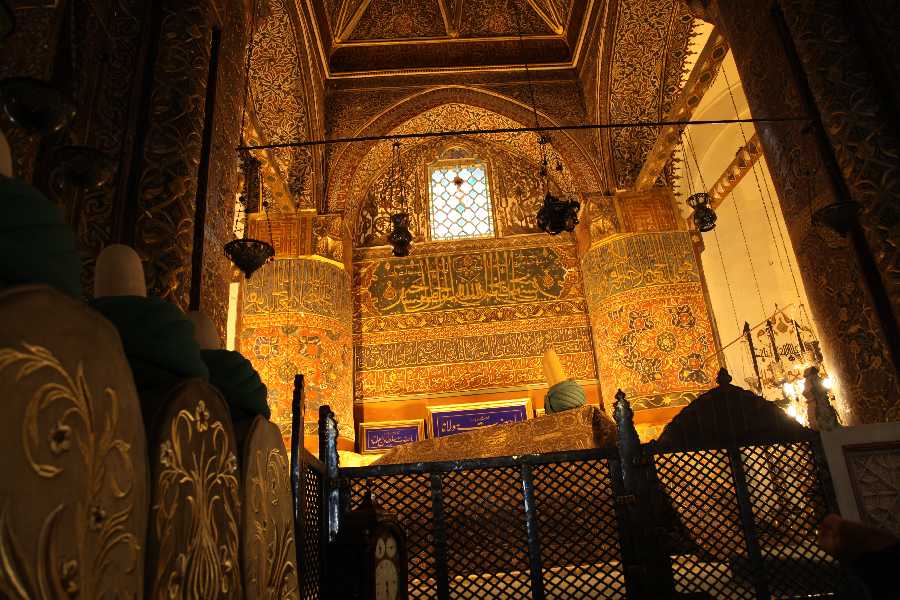 The tomb of Jalal ad-Din ar-Rumi (Mevlana), the founder of the Order of Dervishes 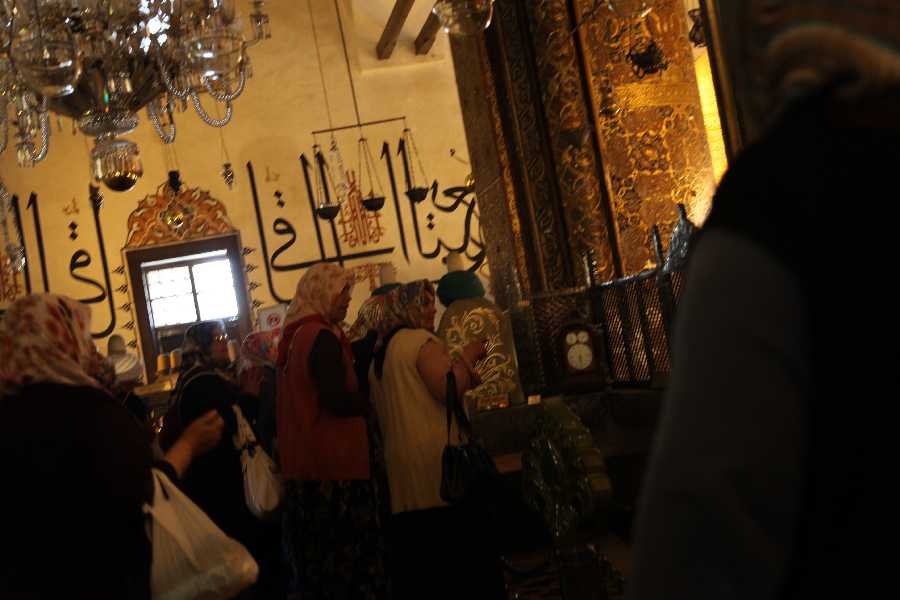 Women praying at the grave of the founder of the order

After a short stay I drive on to Göreme in Cappadocia, another 300 km further east. When I was last here 20 years ago, it was still a nice little place with a few guesthouses in the tuff caves. The picture has changed completely, today Göreme is fully developed for tourism, with a promenade like in Lignano and the hotels and bars that go with it. I renounced the visit to the museum, as I would have had to queue up behind 3 full buses with Japanese tourists to visit the churches in the tuff caves. 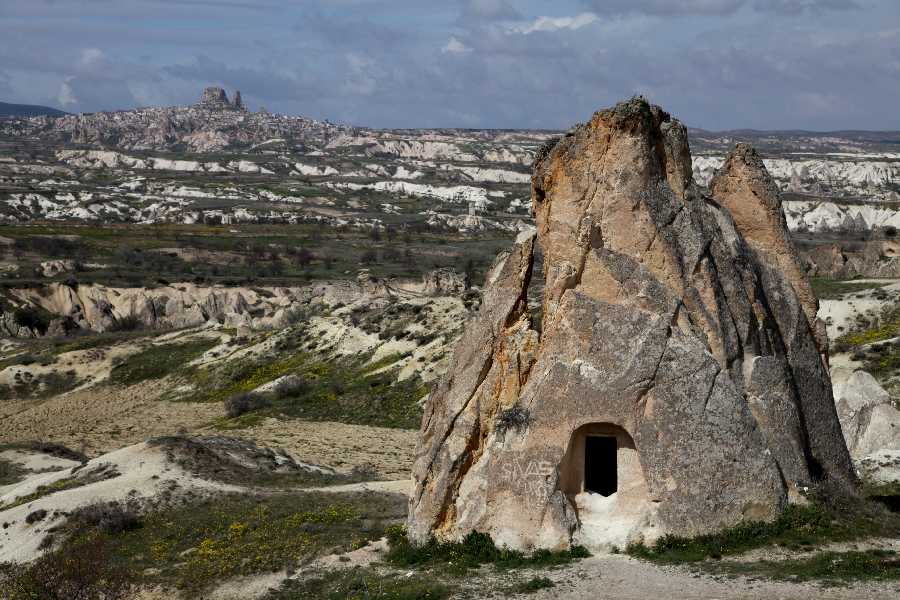 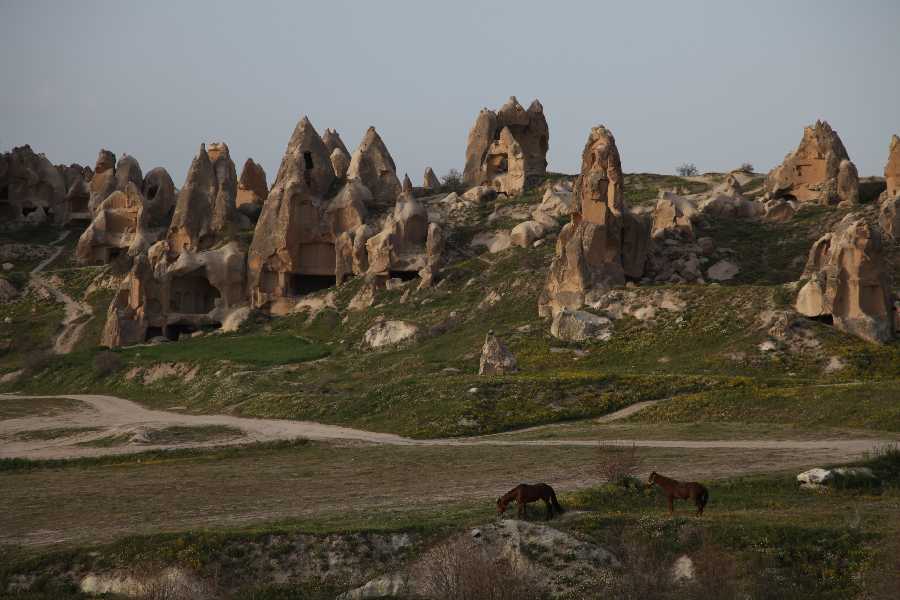 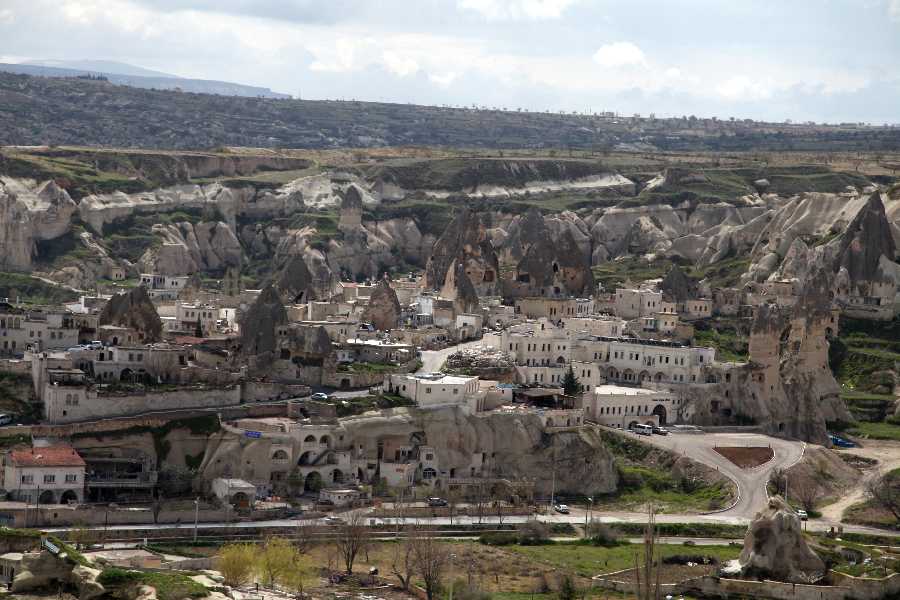 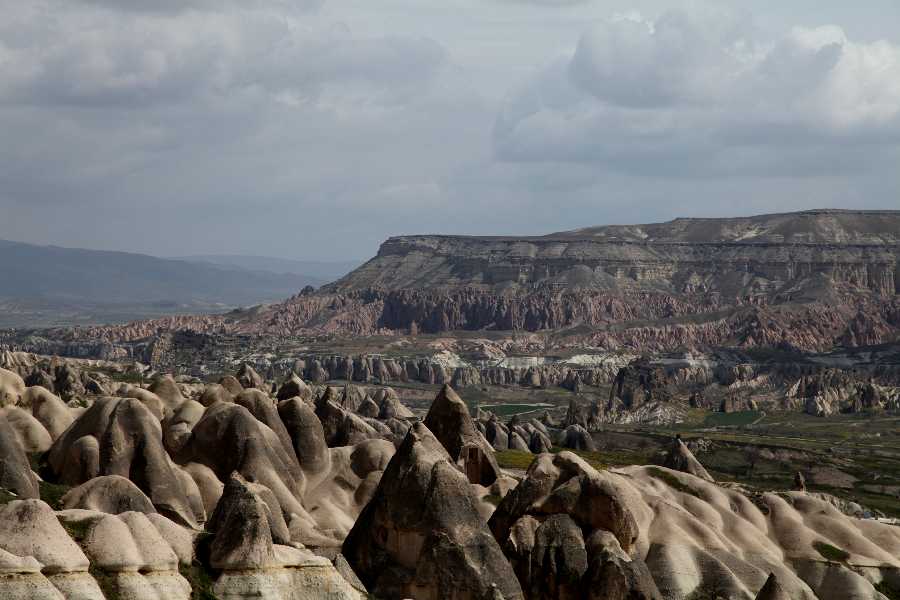 First overnight stay in a tent in rain and storm. At the campground in Göreme I met a young Australian with his motorbike. Since December he is already travelling through Europe the whole winter and continues to Syria. He was working in investment banking in London and at the moment – totally surprisingly – he has a lot of time for travelling. 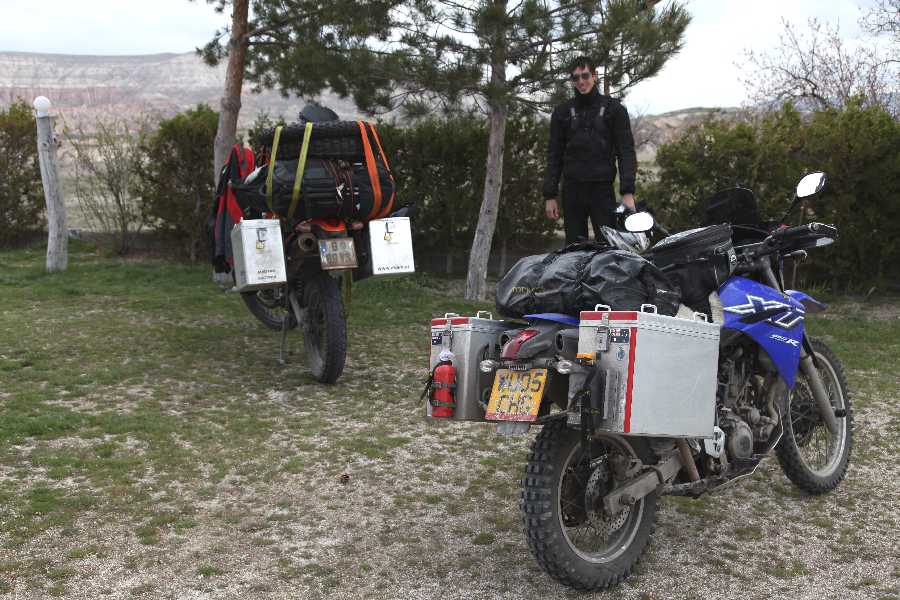 The next stage should be the Nemrut Dag near Malatya, with a short detour to the Syrian border, before finally crossing the snow-covered mountains to the Georgian border. I am happy about every comment.