The onward journey to Samarkand was without problems, the landscape changes noticeably on this route. The last 3 weeks I spent mainly in the sand and dust of the deserts and steppes, the more pleasant the green of the fields and meadows became the further I came to the east. Most obvious is the change in Samarkand itself – with its parks and avenues, this city was extremely pleasant and the highlight of my trip so far. 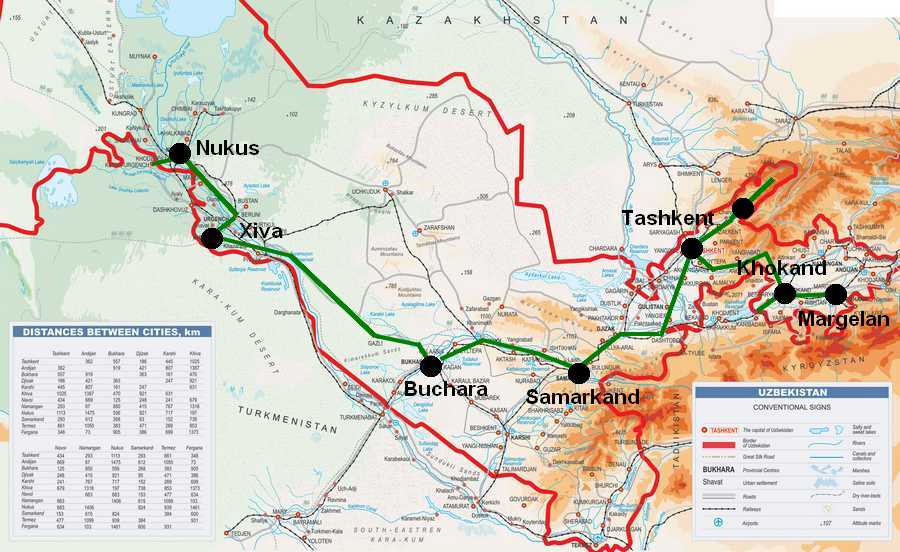 No name is so strongly connected with the Silk Road as Samarkand. For most people, the enchanting words of Sherazade’s Tales of a Thousand and One Nights resonate with all their charm. Looking out over the city, the minarets and medresas with their blue domes, decorated with hand-painted majolica (the hand-painted tiles) over and over, the larger-than-life monuments of the Mongolian prince Timur bear witness to the eventful history. 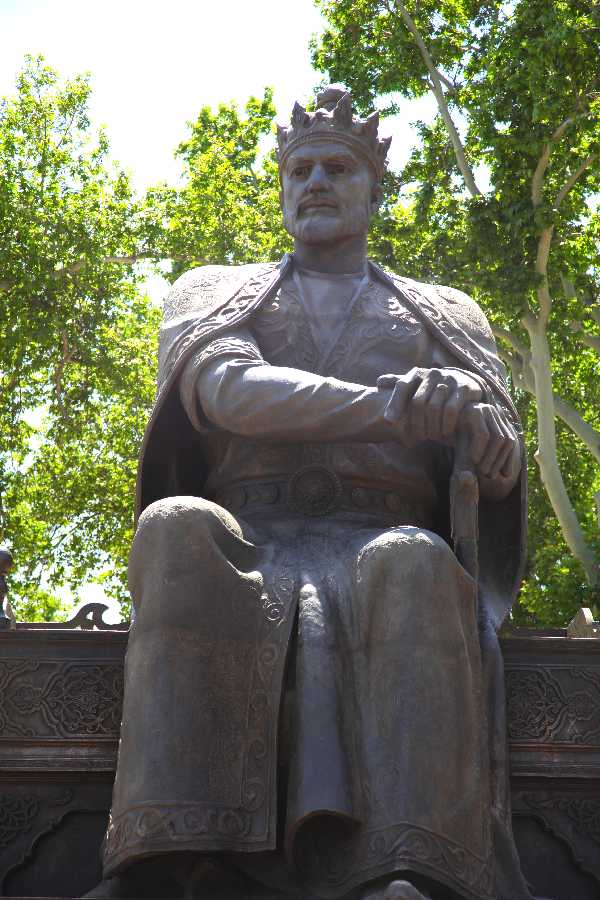 Samarkand is with about 2500 years one of the oldest cities in the world and was already conquered by Alexander the Great. Destroyed under Dschigis Khan, this transshipment point of the Silk Road under Timur was the capital of the empire and was considered the most beautiful and most important city in the world. (14th century) 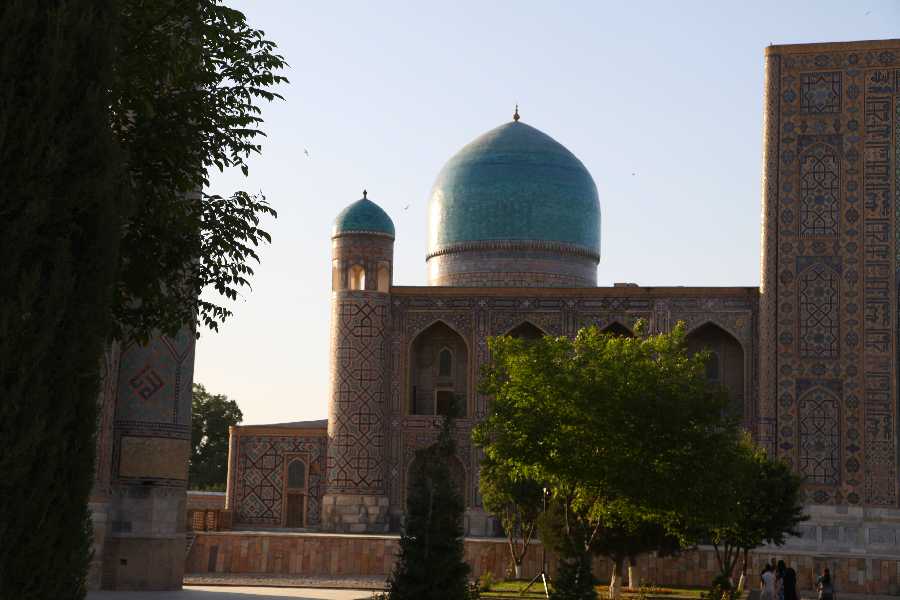 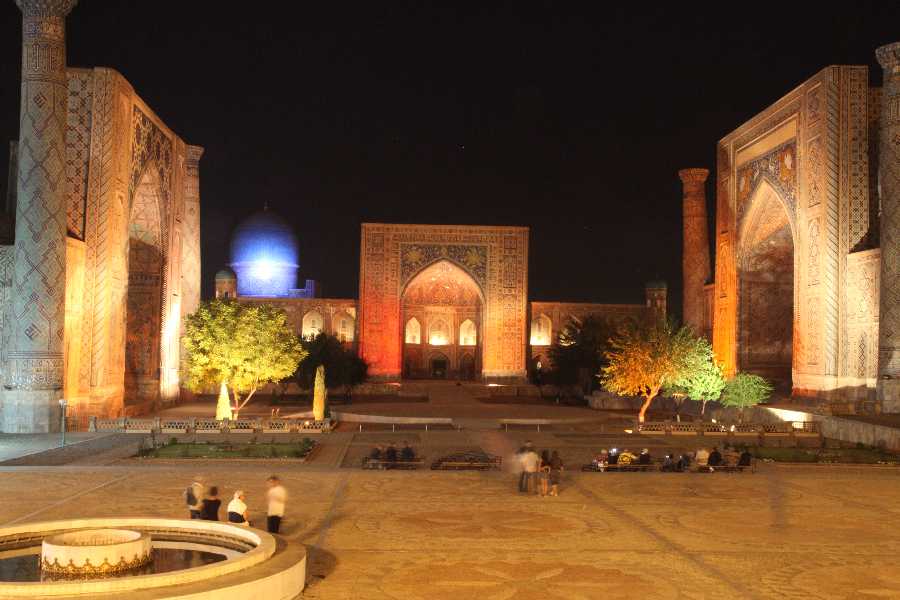 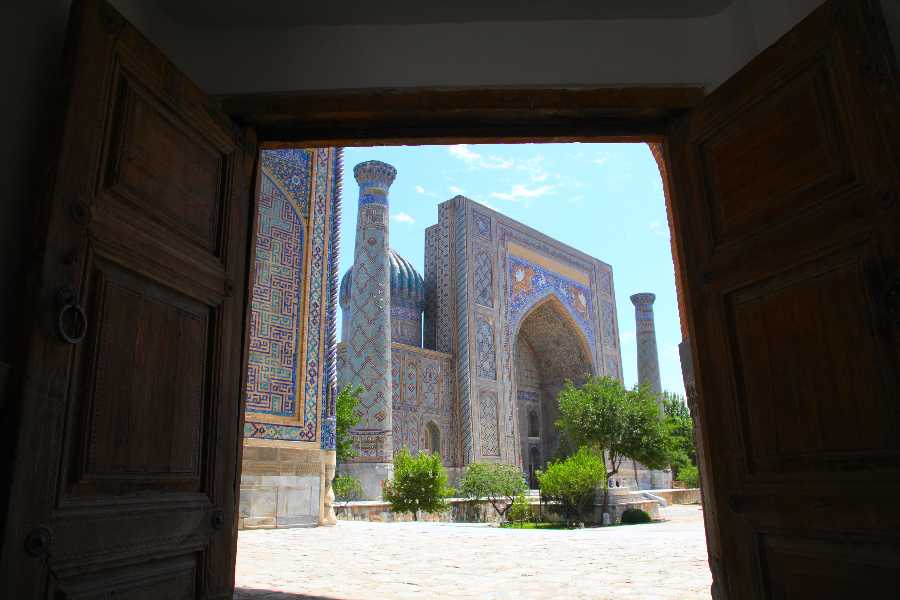 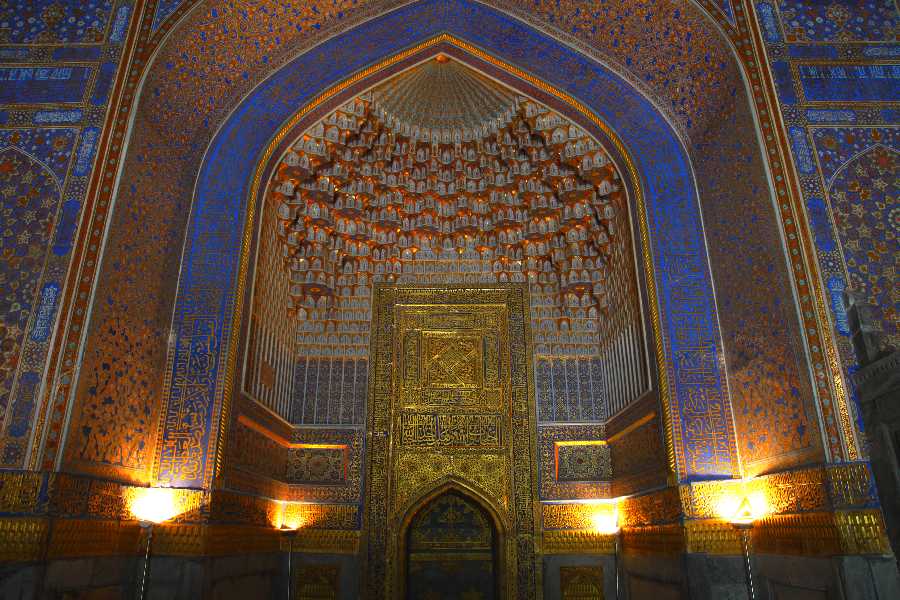 The Rigestan with the three madrasas arranged at right angles to each other Ulughbek (one of the oldest in Central Asia, is regarded as a prime example of Islamic universities), Tell-kari and Shir-dar are today a large joint museum. 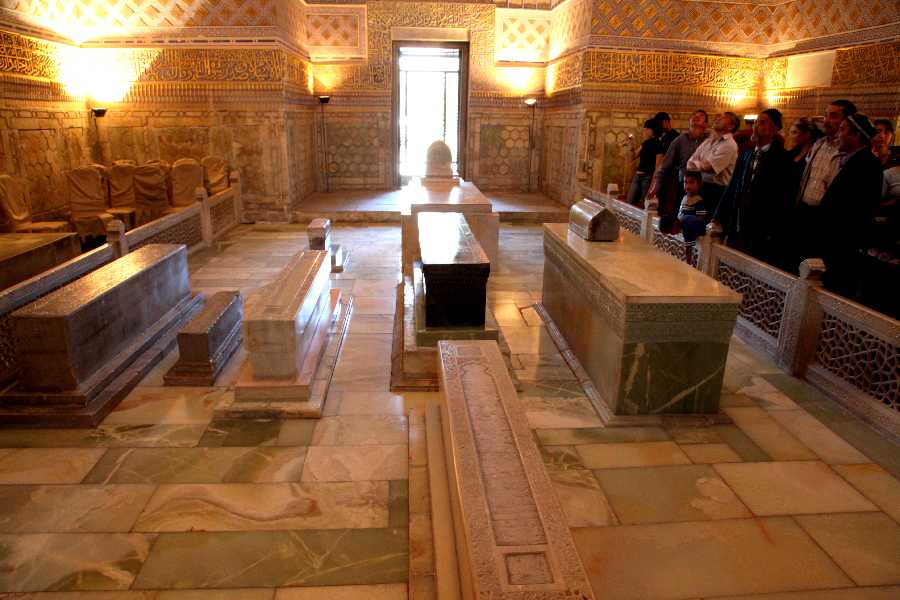 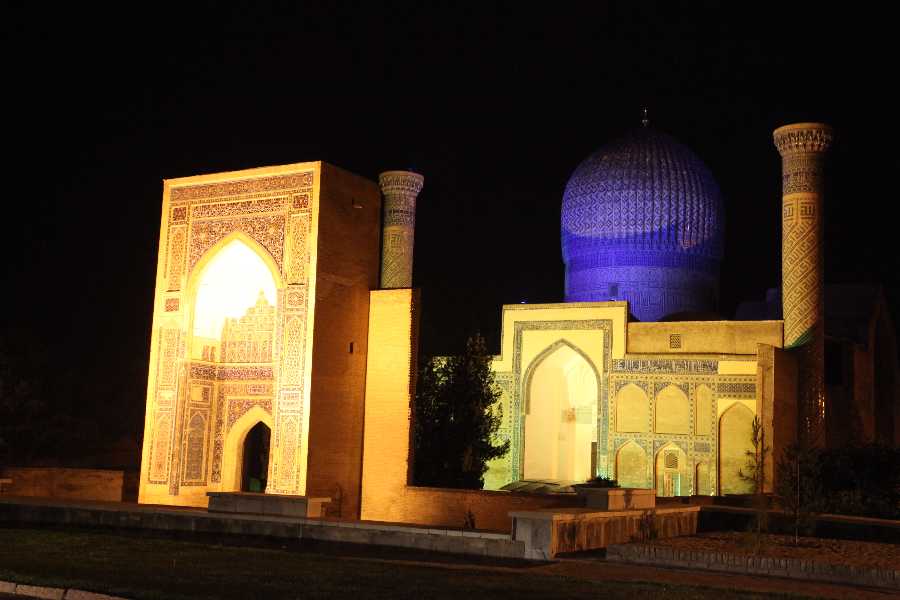 The palatial mausoleum Gur-e Amir with the tomb of Timur 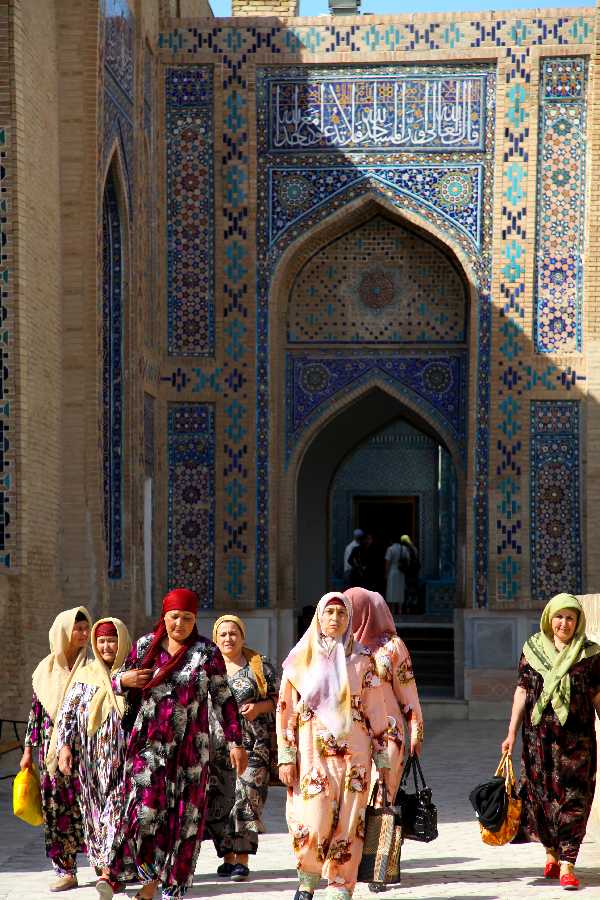 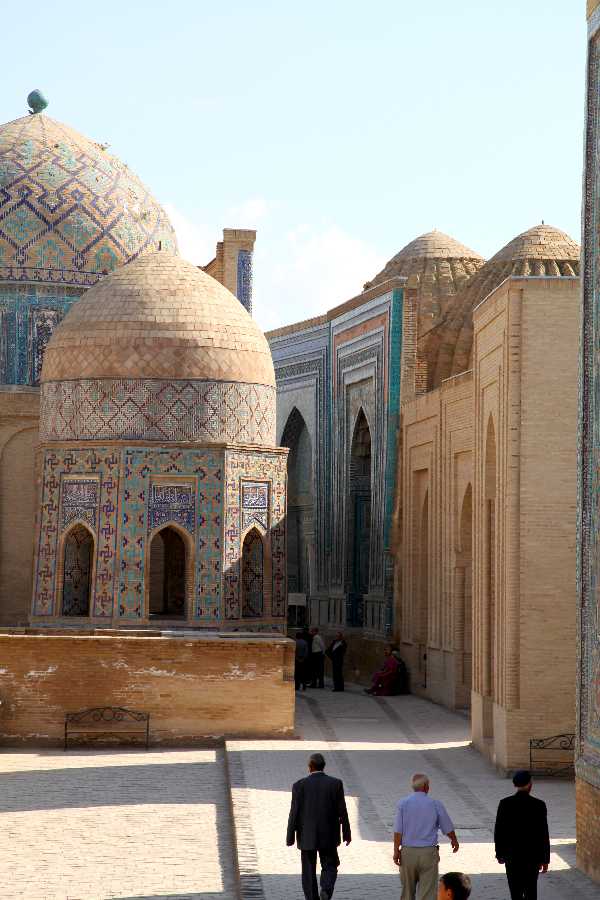 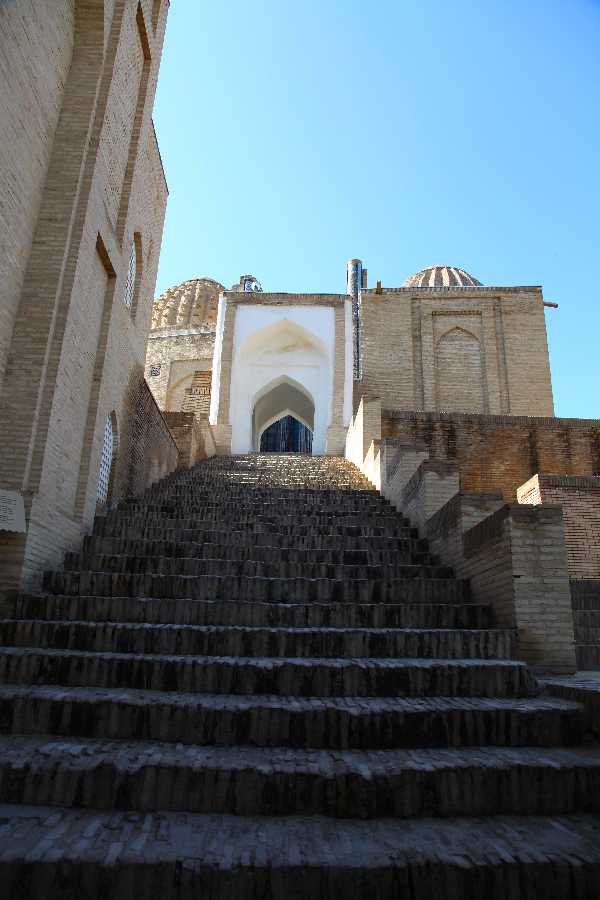 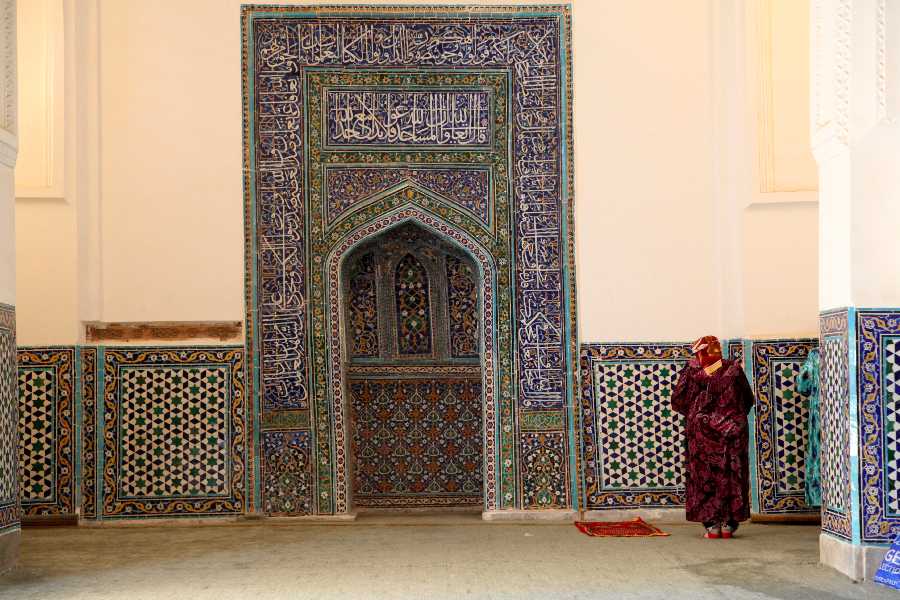 Shah-e Sende – the city of the dead in the hills of Afrosiab with a whole street of grave buildings – the entrance to which was still forbidden for non-believers at the beginning of the 20th century.

The mosque Bibi Hanim was the most beautiful mosque in the Middle Ages – in the shade of the trees of the courtyard men are discussing after prayer. 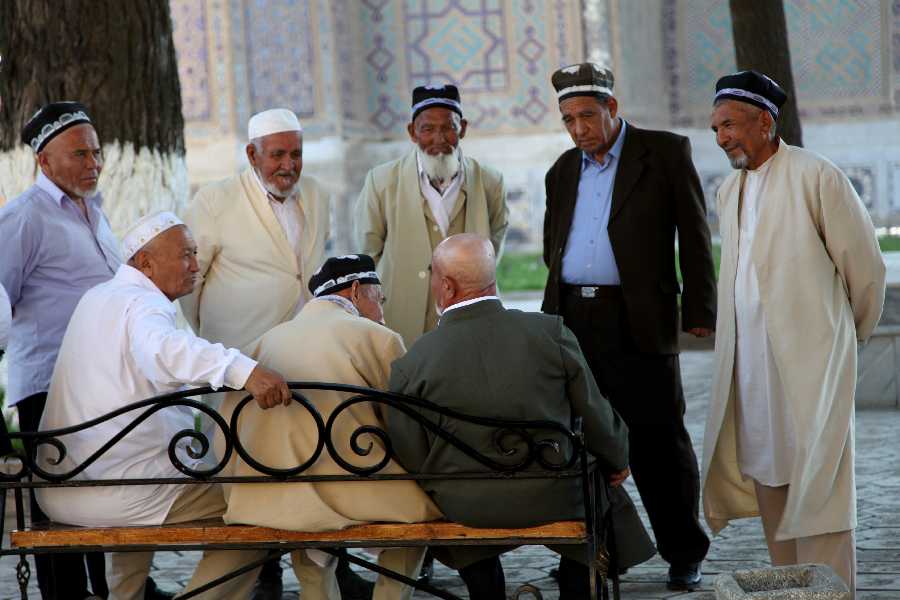 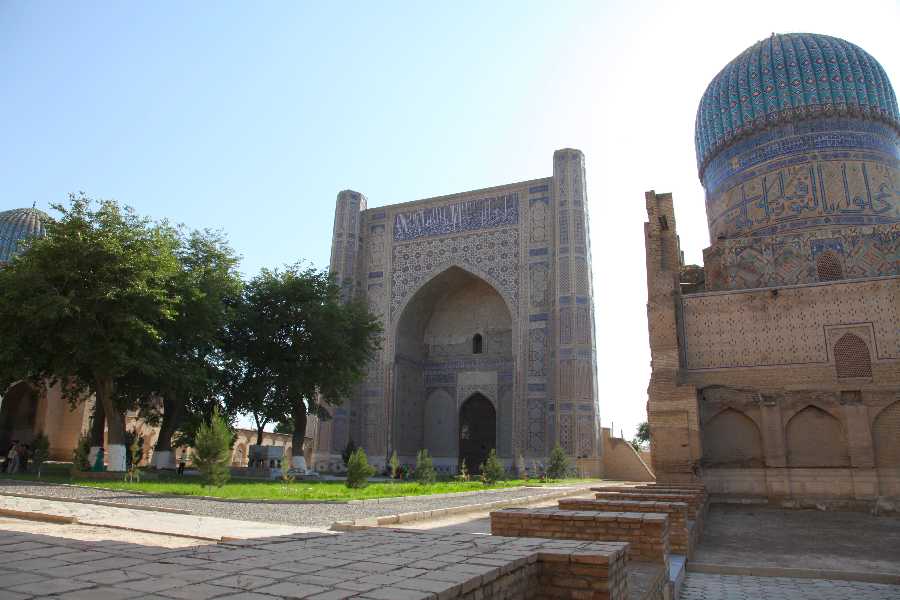 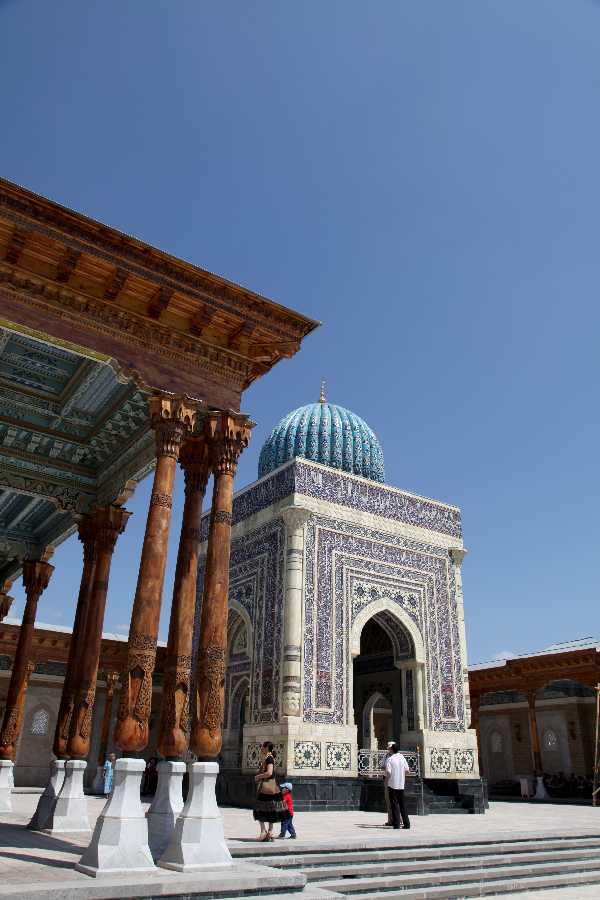 Hodja Ismail – about 30 km outside of Samarkand is one of the holiest Muslim sites – the tomb of Muhammad ibn Ismail al Bukhari (810-870), which is decorated with alabaster, onyx, marble and tiles – The Sunna (collection of Hadiths) written by him is the main source of the doctrine of the faith along with the Koran.

The accommodation in the centre was right next to the Registan – the stay in the B&B Bahodir was so pleasant due to the international audience that I postponed my planned departure by a few days. Every evening we had dinner together, a few bottles of vodka in a round of Swiss, French, Indian, Spanish, Australian, Argentinean, Russian and German people, in addition the matching stories from all parts of the world let the time pass quickly.

Tashkent with its 2 million inhabitants is a city without a face compared to Samarkand. Without a recognizable city center, wide, generous alleys with 3 lanes per lane cross the capital of Uzbekistan. There are no traffic jams, western boutiques and bars are plentiful and if you want to, you can go to an Italian pizzeria around the corner. Every car is a taxi at the same time, private people take passengers for a small fee and at the Tashkent Palace Hotel you can sit in the lobby with your laptop and use free Wifi. The people here are fair-skinned, red hair and blue eyes are not uncommon. A relic from the times of Soviet rule, when all responsible positions in local industry were filled with skilled workers and specialists from big brother from the north. 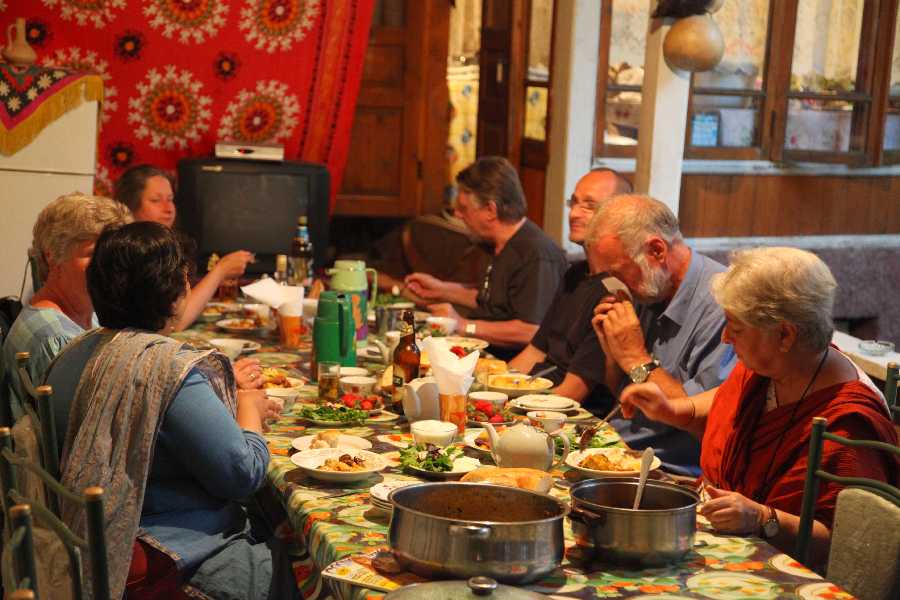 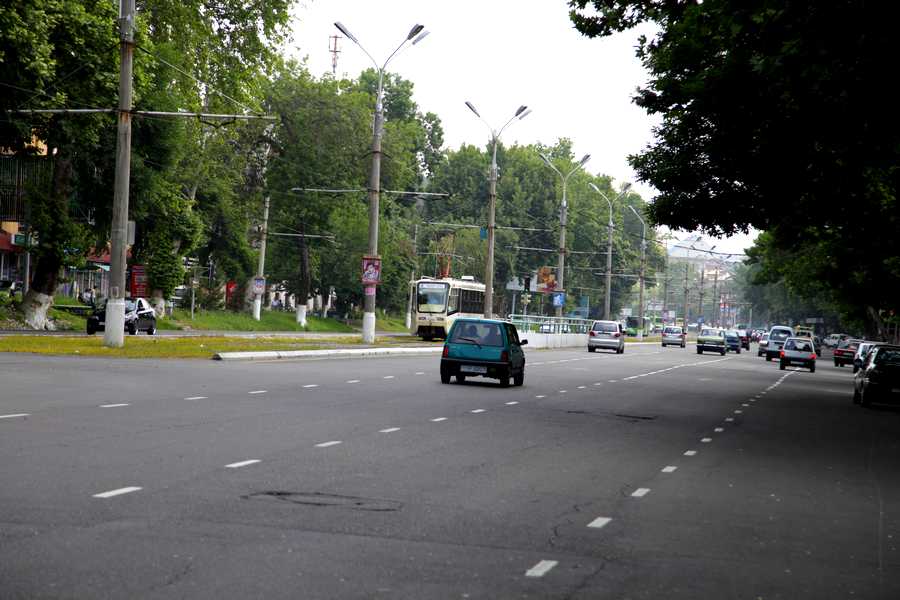 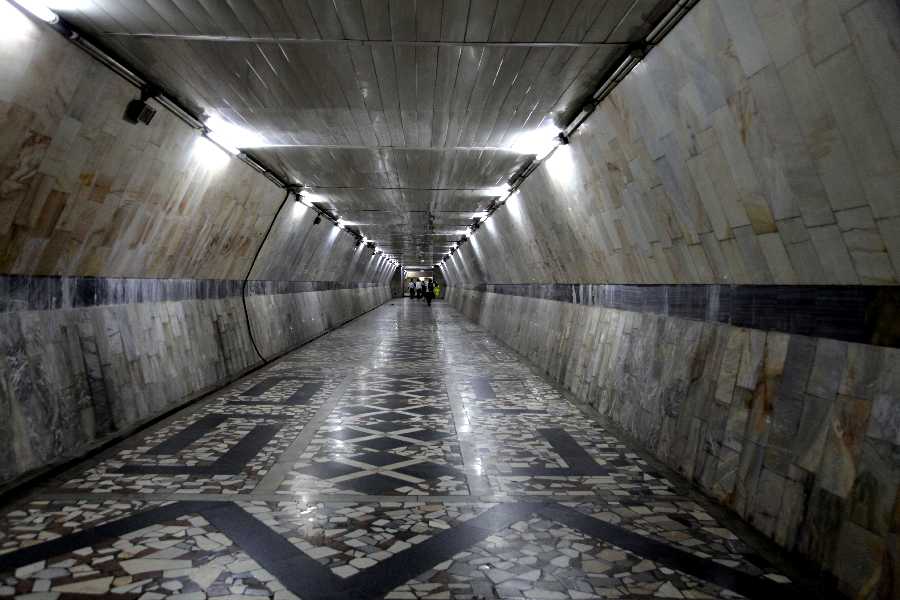 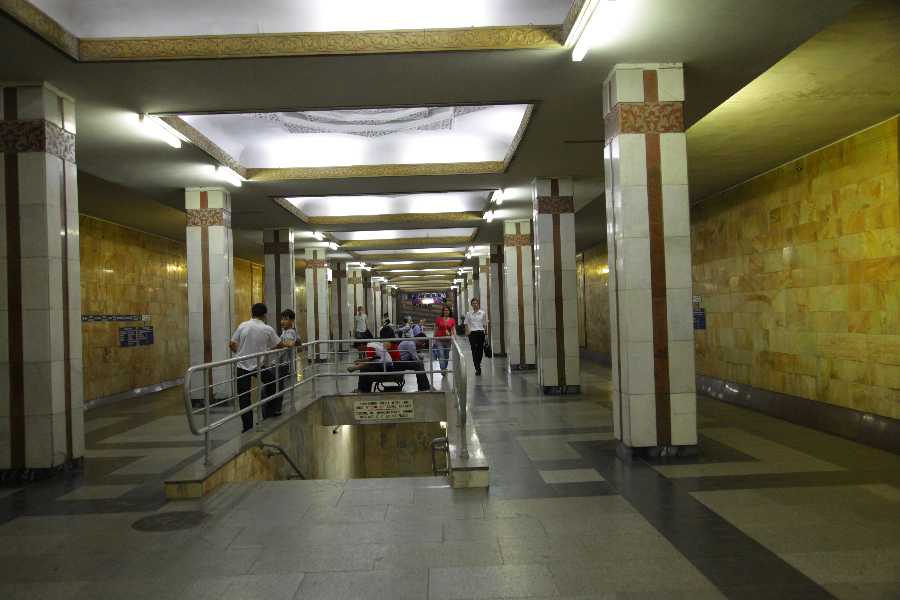 The most worth seeing were the underground stations built during the Soviet era.

I had to get my visa for Tajikistan here. Normally Europeans don’t need a letter of invitation (LOI) for it, but the ambassador here insists on it anyway. As I wanted to stay in Tajikistan for more than 30 days because of the trekking, I had to find a way around this, as the possible extension in Dushanbe is very complicated with a temporary invitation.
Right next to the embassy I was able to find an agency that did everything for me for a fee – 100 USD visa for 30 days and 35 USD handling fees. After 3 days I was able to receive my passport with the visa without any problems – this should allow me to extend my stay in Tajikistan if necessary.

The Fergana Valley is considered to be the most original Uzbekistan and is also the center of silk production.
Uzbekistan is the 3rd largest silk exporter in the world. The silk production is monopoly of the state, the larvae are given to the farmers for breeding and the finished cocoons are bought back.
For the breeding of a handful of larvae (about 30 gram) 4 rooms are needed, the caterpillars eat only the leaves of the mulberry tree. They are fed 5 times a day with fresh branches, at the beginning with about 3 kg a day, shortly before pupation with about 300 kg a day. After the caterpillars pupate, they are killed by the farmers with hot steam. As a result they can deliver about 100 – 120 Kg to cocoons. One kilo of cocoons produces about 400 grams of raw silk.
The breeding directly on the farms cannot be visited, because the farmers think that the caterpillars can smell people – that is why only one person is allowed to enter such a room during the whole breeding process. 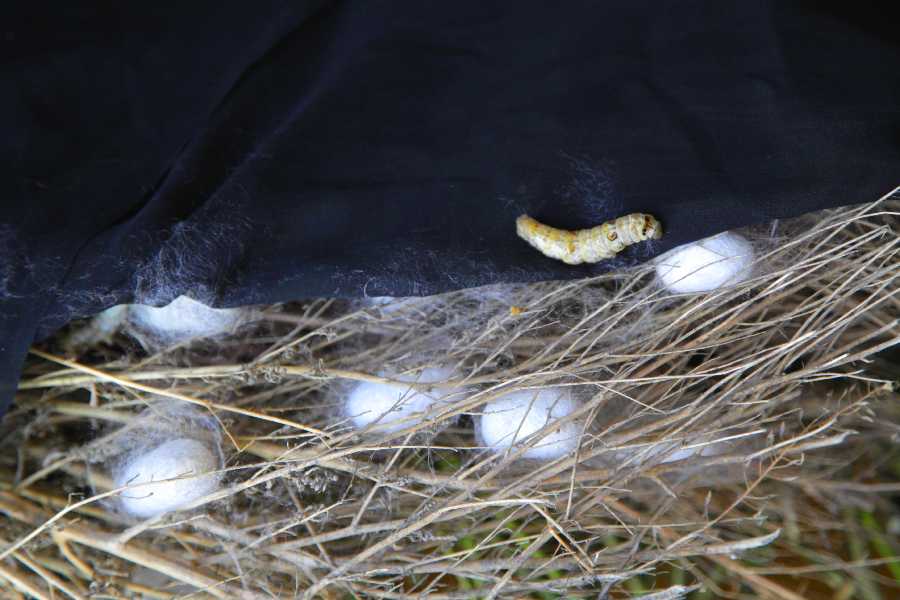 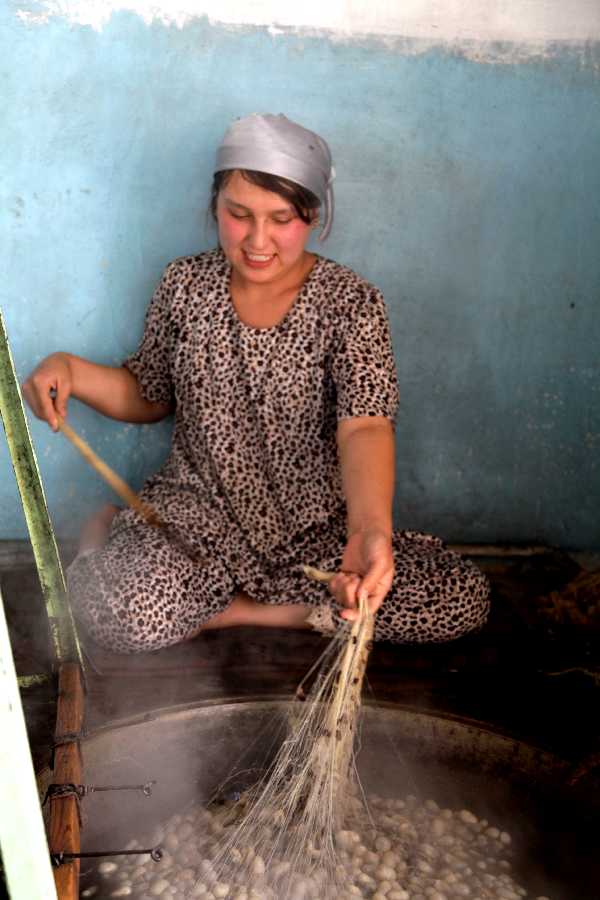 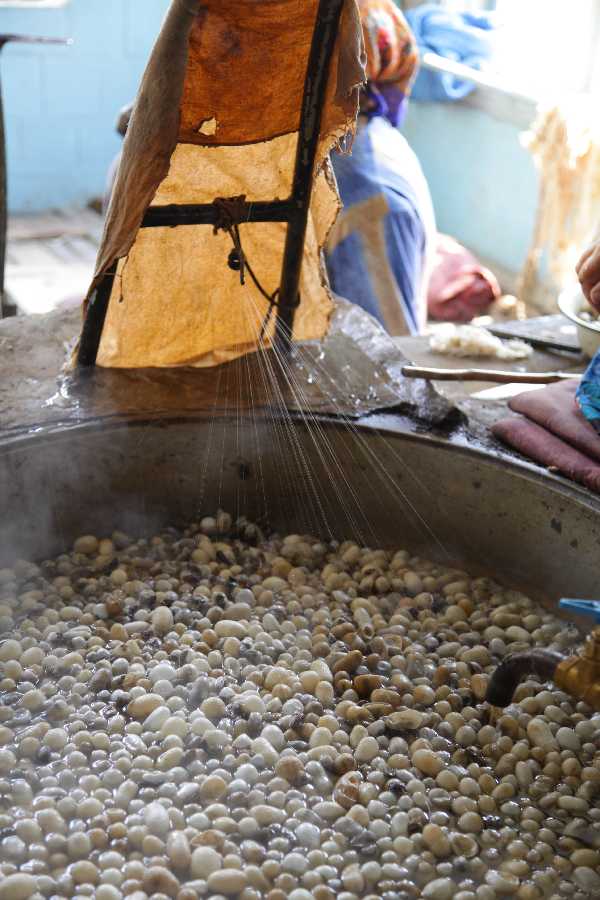 With the use of hot water, the cocoons are transformed into silk – 30 threads are spun into one yarn, and natural dyes such as vegetables, plants or fruits are used to give the finished silk skeins the right colour. The knotting of silk carpets requires perseverance – 3 months are needed for 90 cm of carpet. Most of the buttoning is done by young girls, they have better eyes and more delicate fingers. At the looms the silk is processed by hand into scarves and shawls. Even old machines are still in use – these looms were used before and during the 2nd World War to produce parachute silk for the military – today silk fabrics are woven for the production of clothes.

I had met these two Frenchmen in the silk factory – they were forced to stop their trip through the Pamir, because they had been caught in a rock slide with their vehicle in Tajikistan. The jeep was badly damaged and had to be repaired in Dushanbe. 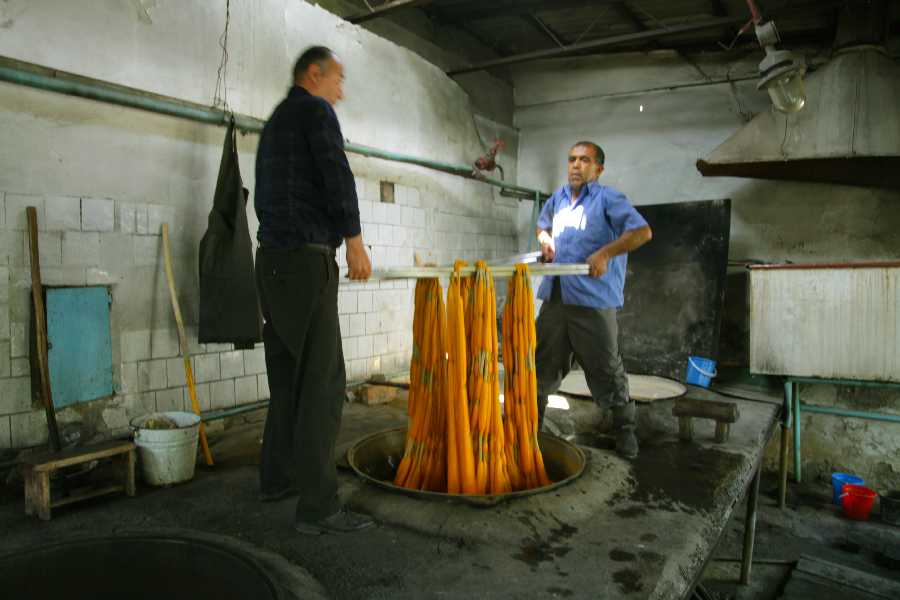 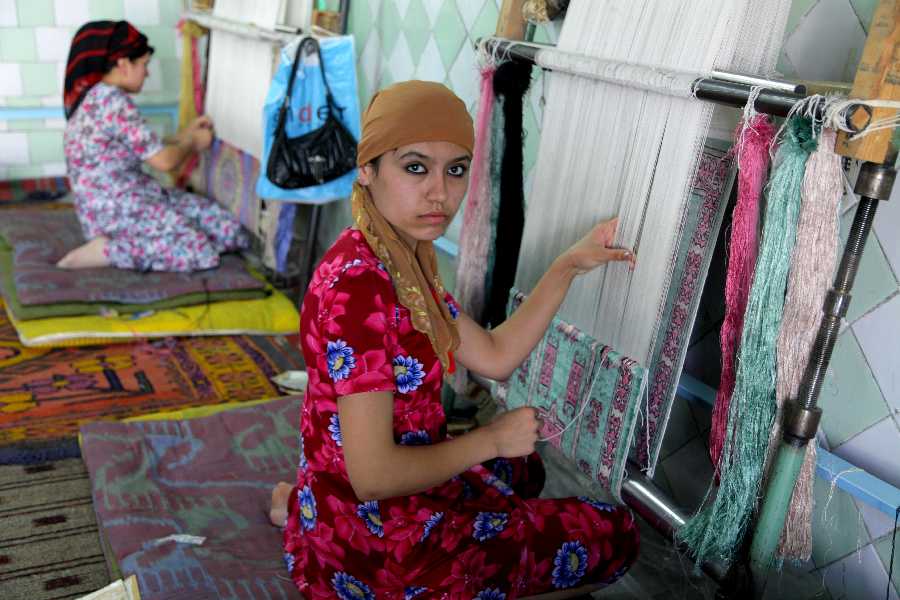 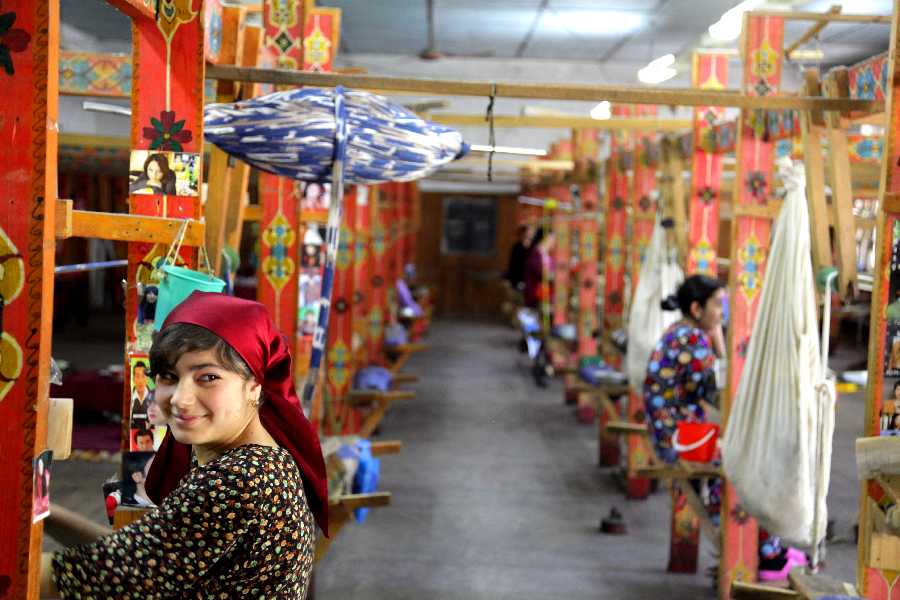 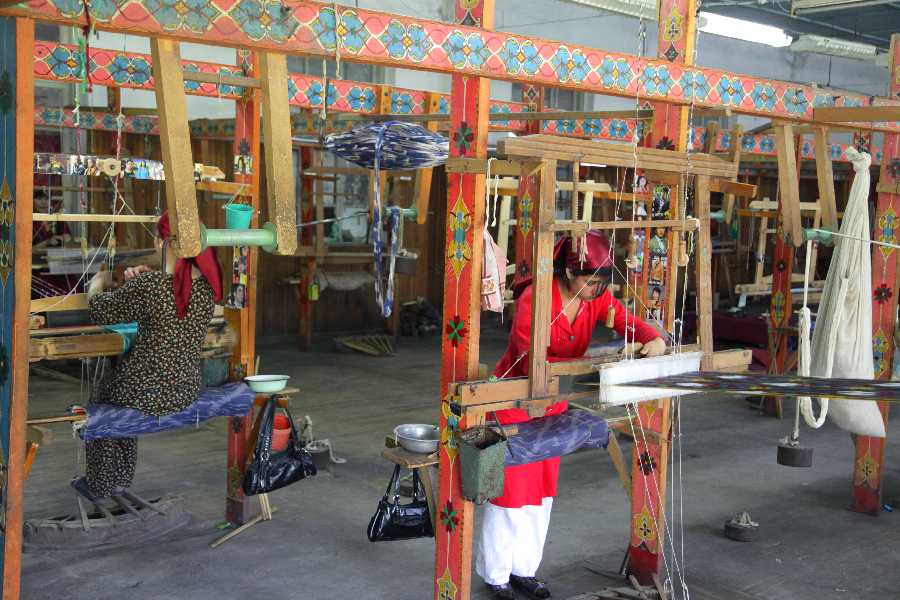 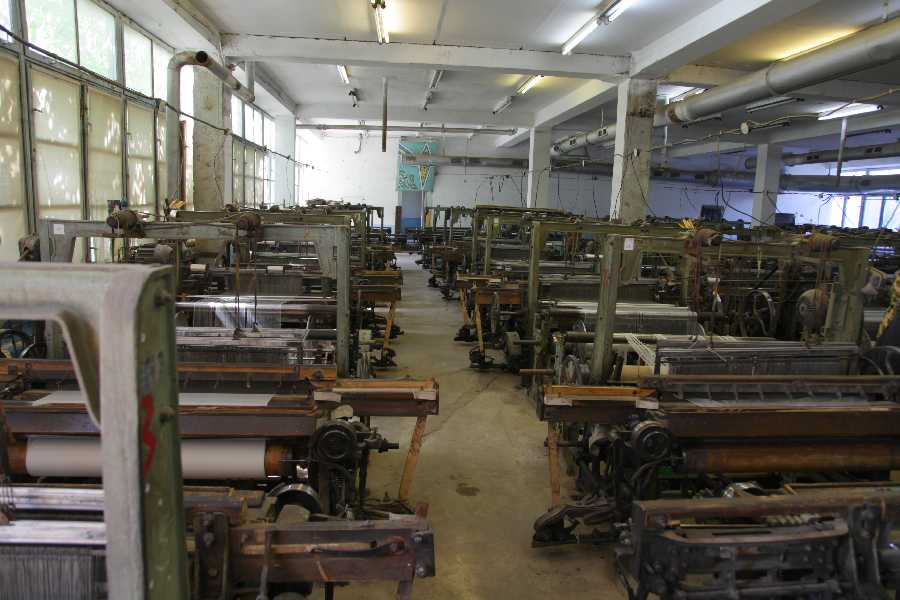 In Khokand I had spent one night in the worst hotel since my trip so far – unfortunately it was the only one there. In search of a new accommodation for the 2nd night I was “picked up” by an Uzbek family – they had invited me from the street to spend the night with them. Over beer and Plov we had an interesting conversation the whole evening, although I hardly spoke Russian and she no English – but somehow we understood each other. 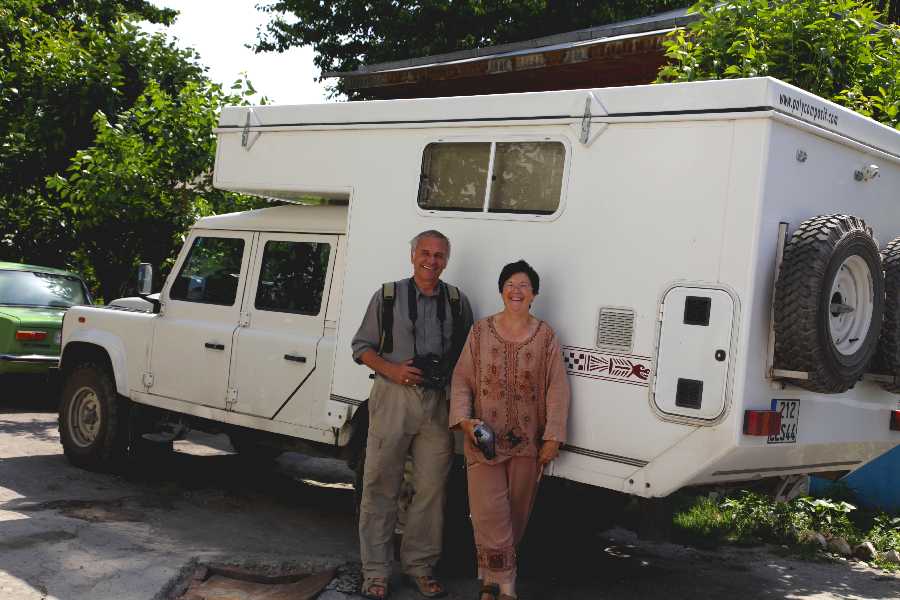 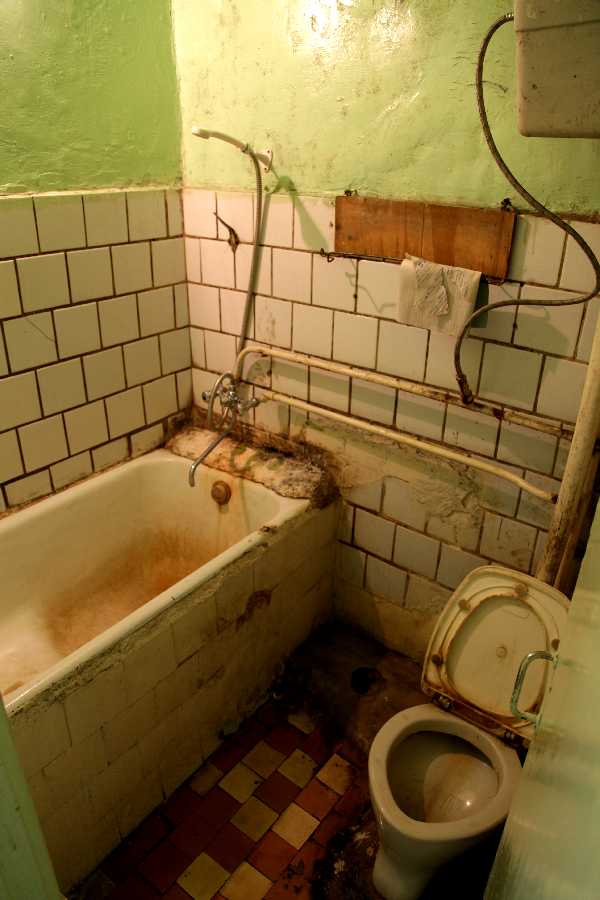 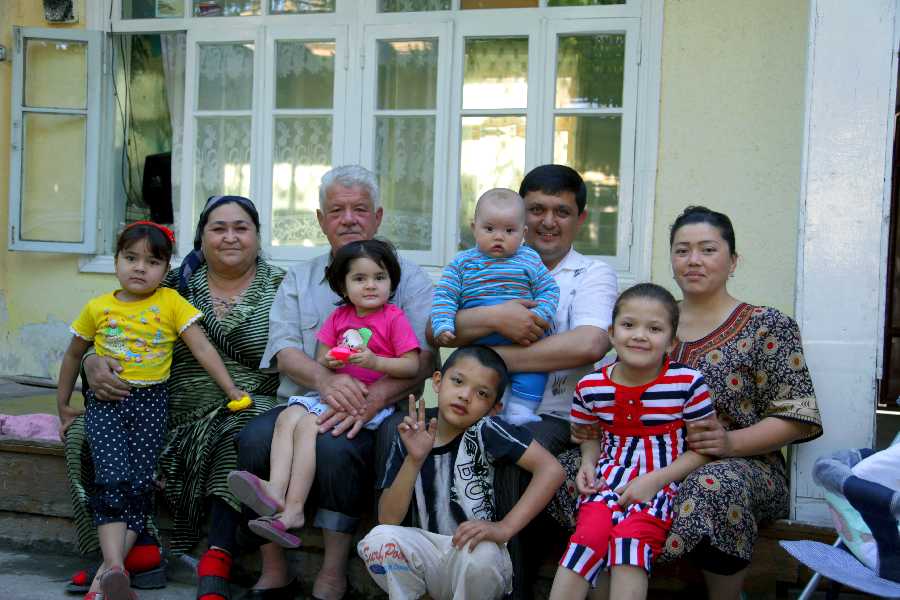 Silk Road & Pamirs #11 – Through the North of Tajikistan