Nobody could tell me how long this trek in the south and west from Leh to Kargil would take. The route I had put together consisted partly of sections of classic Zanskar standard treks and my own trails, hardly used by tourists or locals. The lower lip had healed, packed food and fuel into the rucksack for ten days, and all the unneeded luggage had been sent to a hotel in Kargil ahead of time. The plan was to march south from Spituk, a village 10 km south of Leh, into the Markha Valley, cross the Zanskar River in an easterly direction and continue to the classic Lamayuru – Padum – trek, before heading south again to Lingshed. Up to this point these are actually typical tourist treks where some infrastructure was to be expected. From Lingshed we went east again via Dibling to Rangdum and from there we went north to Kargil. Several days of this second section were hardly used, neither by tourists nor by locals – if you have overcome them halfway intact, you know in retrospect why there are very few people on these routes. The exact route can be followed via the tracklog on Google Maps.

The first days were easy, there were quite a lot of people on the narrow footpaths – horse drivers ran ahead with their animals and luggage, while the mostly European trekkers with guide and light equipment leisurely plodded behind. Whenever I met a group of tourists or locals, people were amazed that there is someone who carries his own luggage in the mountains. For many people it is incomprehensible to walk through the landscape with 40 kg on the back when one has the opportunity to load the equipment on animals or porters. Especially since these transport services are relatively cheap by western standards. After the usual “Aha, strong man” – saying usually followed a pitiful smile. 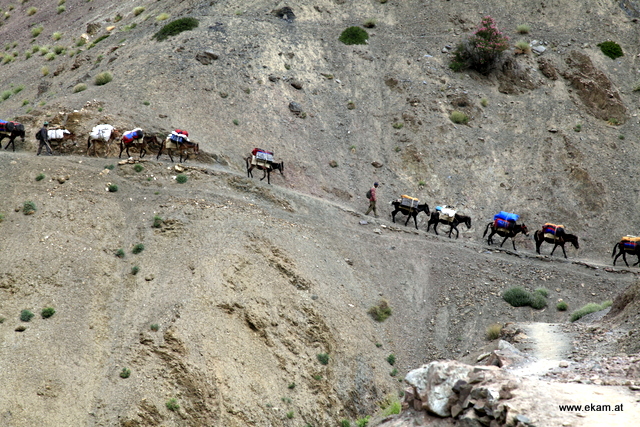 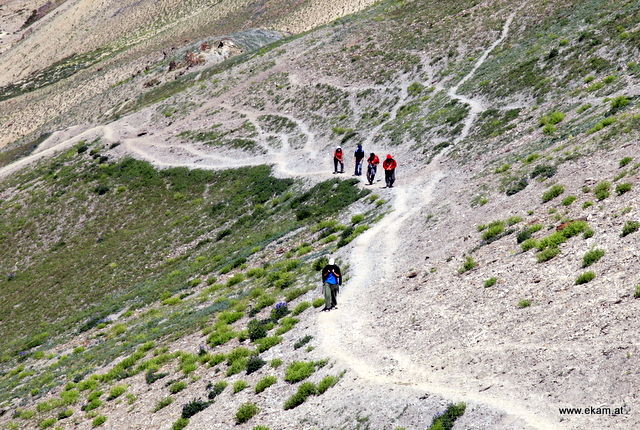 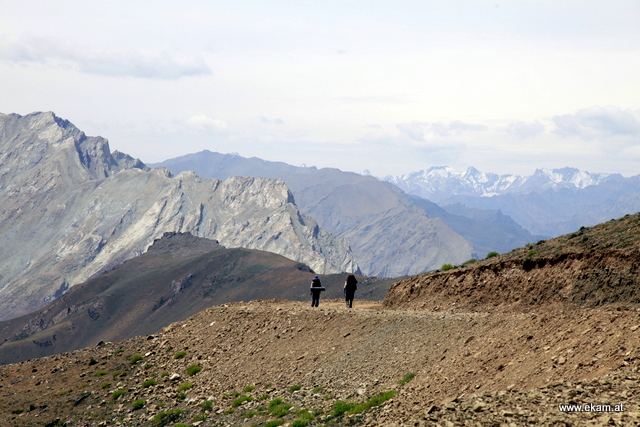 Due to previous experiences in India, to engage porters would be out of the question for me – in contrast to Nepal, Indian porters are not used to carry more than 20 kg (including their own luggage) and to walk for more than 5 or 6 hours. In Uttarakhand I had tried for several days to find a reliable companion who would take some of my luggage and walk my daily stages with me – no chance.

On the first day on my way to Kargil I met James, an Englishman of about the same age who teaches at the university in Hong Kong. He had hired a porter for his 20 kg rucksack for a 7 day trek through the Markha-Valley in Leh and we walked a few hours together. He told me the story of the young man – he wanted to do something good, so he employed a young Ladakhi, a part-time student porter with a small child at home, who also had to support his parents. Based on this resume, he paid him daily voluntarily as much as one would normally pay for 5 horses including the horse driver. Apart from the fact that I doubt the truth of this story – the young man was completely exhausted after 3 hours, exhausted, totally worn out and could not walk a step – they had to finish the daily stage earlier than planned. I don’t know how this (gate)tour went on, but I guess the planned 7 days turned out to be 10 days or more. Since I am used to being on the road for ten hours or more every day, the risk of having to rely on a local porter would be too great for me.

The situation is similar with the horse drivers. Apart from the fact that in the high season it is almost impossible to find a guide who will take less than 5 or 6 horses with him, the Horseman are also used to run normal, tourist daily stages. This means that usually after 5 or 6 hours the daily destination is reached and the tents are pitched. If you ask them about longer daily stages, they will answer that this is not possible, because the animals need exactly these grazing areas. However, this can be nothing more than a cheap excuse, because when horse drivers transfer their animals back to the starting point after completing a trek, they usually manage the distance previously covered with the group in a third of the time. The background is rather that the horses are rented on a daily basis, i.e. if he is on the road with tourists for 10 days, he gets a certain amount of money for each horse every day – if he would complete the same route with me in only five days, he would have half the salary for the double work, so to speak. Of course nobody wants to do this voluntarily, especially at a time of year when the demand for carrying horses is greater than the supply. So I would have had to find a horse driver who would have gone this distance with me with more horses than necessary (a horse can carry 60 kg – I only had 40 kg to give away) and who would have had to pay him for far more days than we would have been on the road. This could then really go into the money, which in the end was not worth it to me. 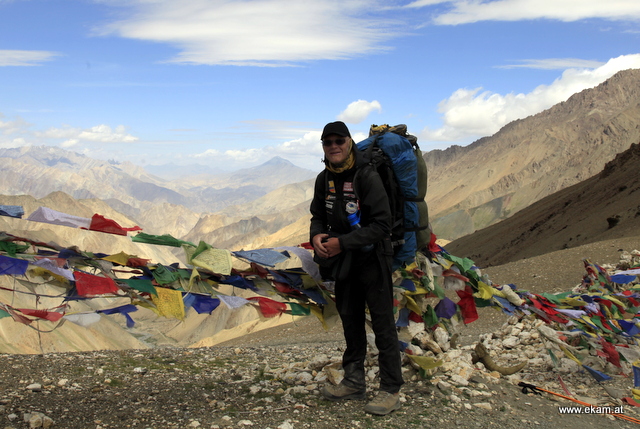 Hiking through a multitude of different landscapes, the hills and mountains played out their colourful splendour – karstic, red, black, yellow, brown and green coloured mountain slopes alternated with fertile oases on wild rivers, narrow gorges with wide valleys, sleepy villages followed steep passes, hours of loneliness came after the mostly morning flood of oncoming trekking tourists. Variety, exertion and also excitement was provided for in the Zanskar area, with daytime temperatures of up to 41 degrees Celsius followed by frost at night. 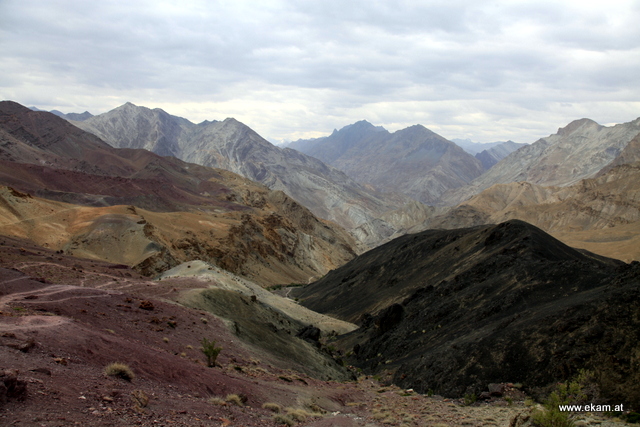 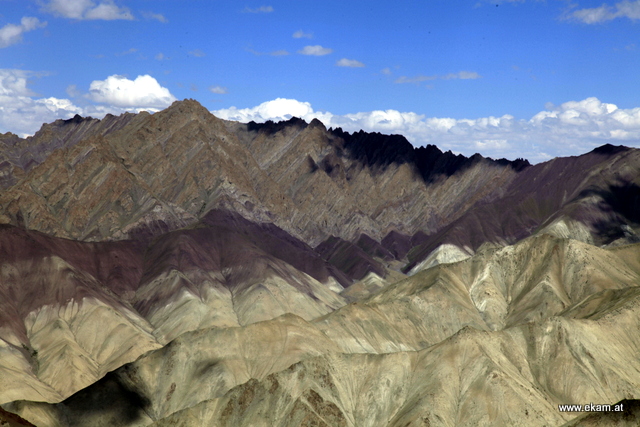 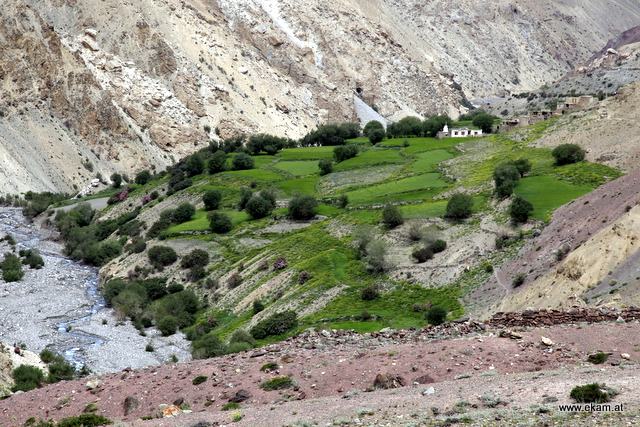 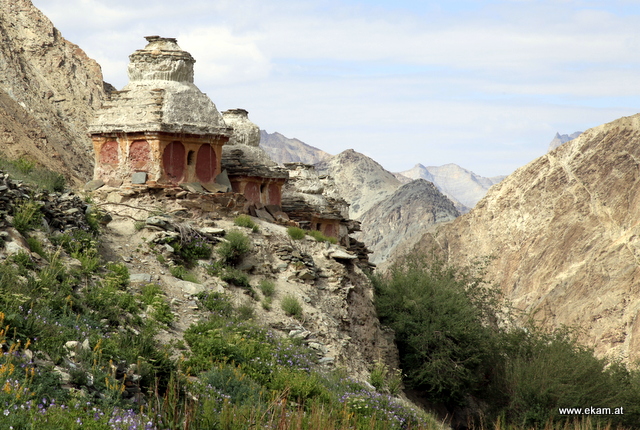 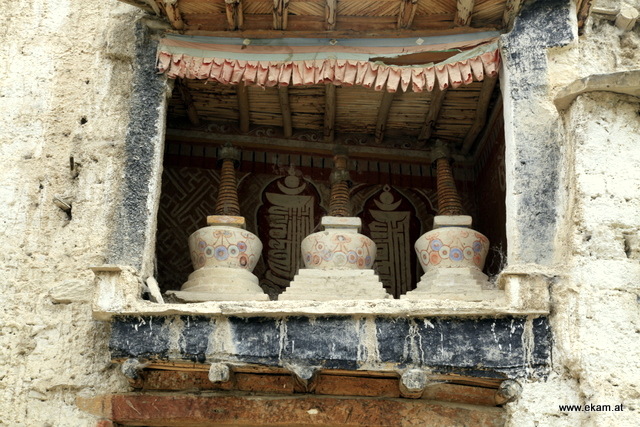 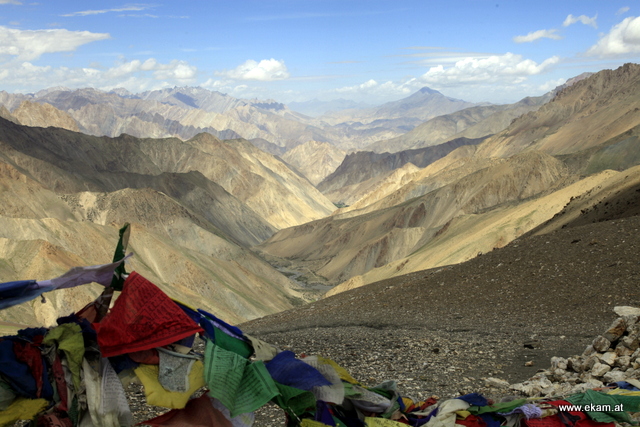 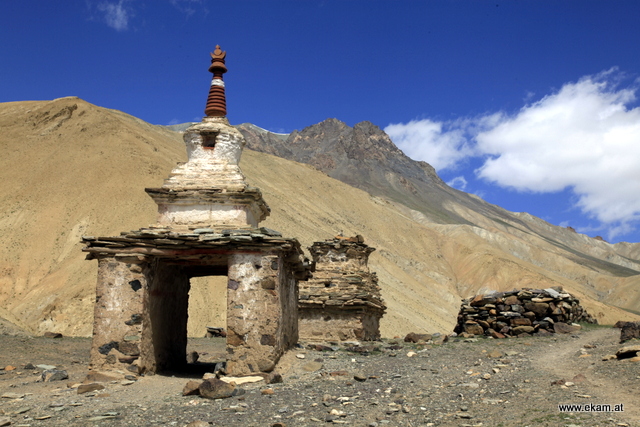 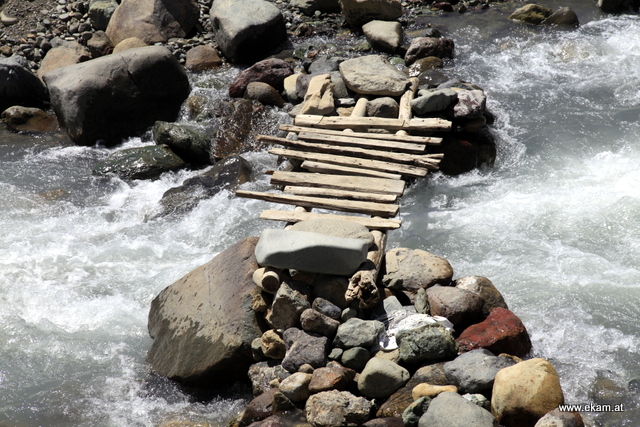 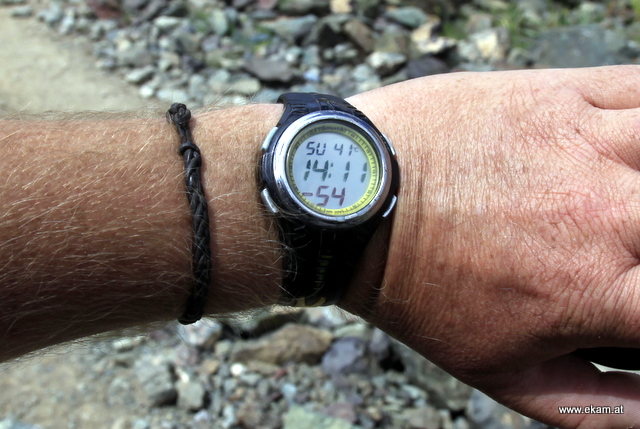 The Zanskar River itself was to be crossed in a metal basket on a rope. There was a little excitement because before that you had to wait almost 2 hours because of a repair of the rope. Since I was not the first to cross the river, the trip was relatively relaxed. 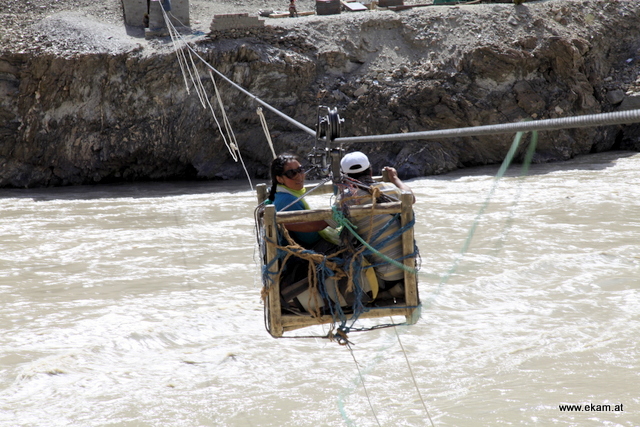 Less relaxed, really excited and completely beside myself I was through an experience, which I believe had been a very special, unique and sensational observation in my life, so to speak my personal lottery jackpot – besides the mild outcome of various crashes and accidents – on this trip. Due to the rapid weight loss, I had partly shortened the daily stages a bit by not setting off at 6 o’clock in the morning as usual, but rather around 8 o’clock or a little later. After crossing a relatively strenuous pass, this delay allowed me to witness live how, on the other side of the gorge, a snow leopard had attacked a flock of sheep and killed one of the animals – an event that professional nature photographers or television teams have proven to take several years to capture on film or photo. What is left of such a sheep when it gets caught by a snow leopard can be seen in the second photo. 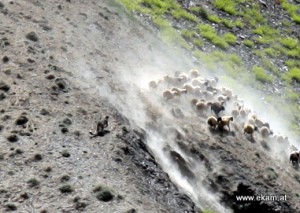 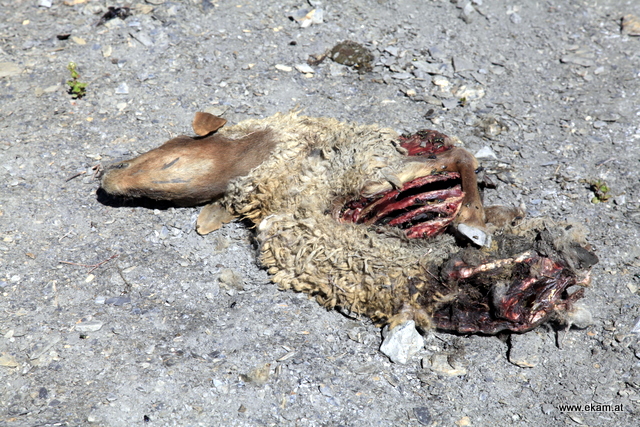 The people in Zanskar are friendly and nice throughout, adults as well as children. The main source of income in the villages along the trekking routes is tourism – a basic infrastructure is available, i.e. sleeping facilities and food in private guesthouses and teahouses and with a bit of luck also the possibility to recharge batteries with the help of solar power. 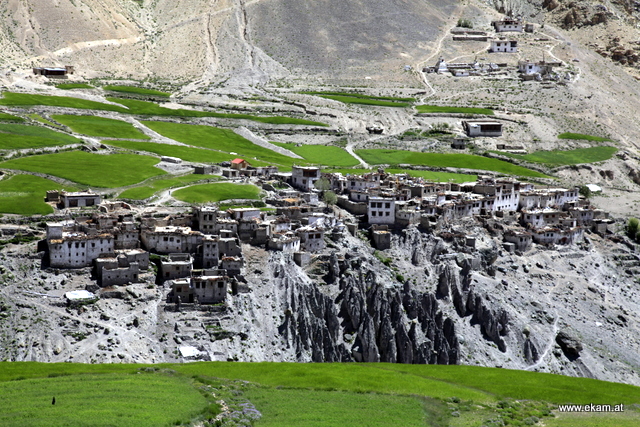 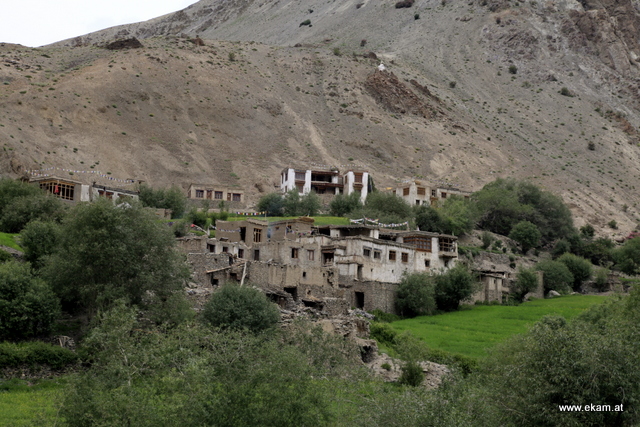 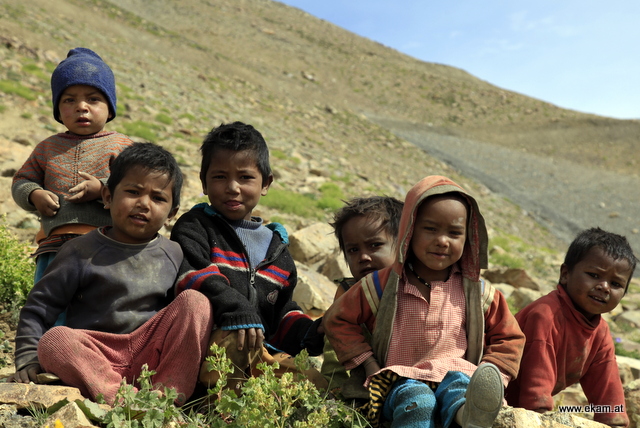 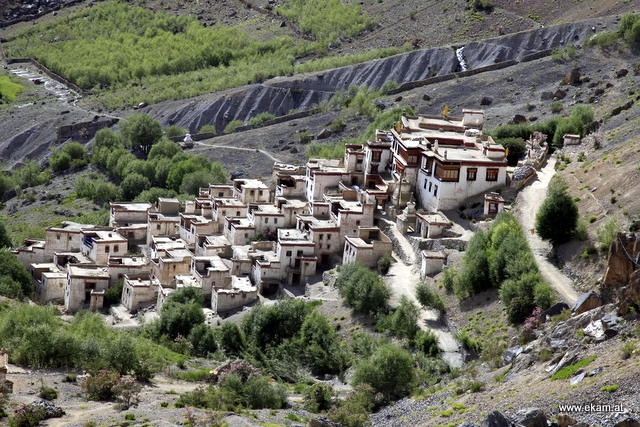 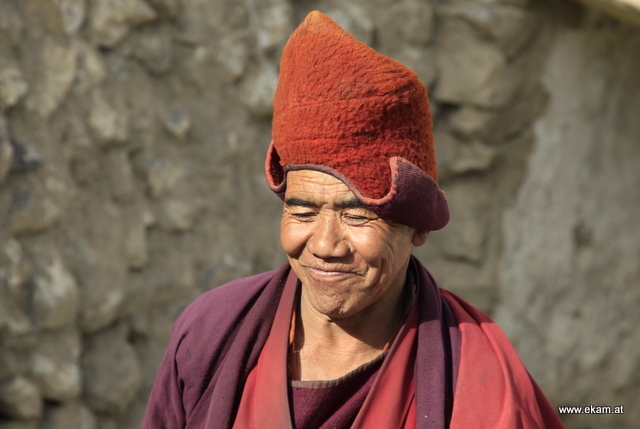 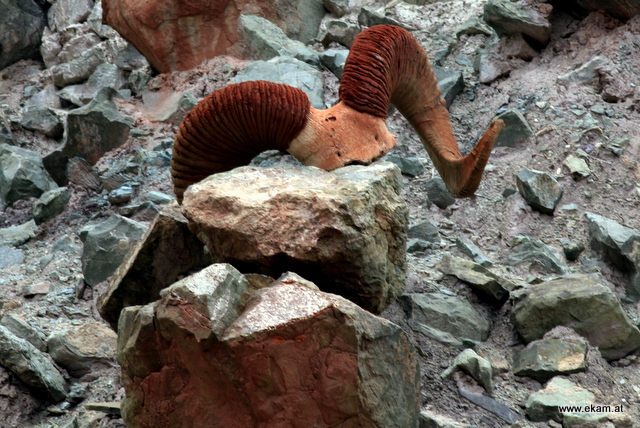 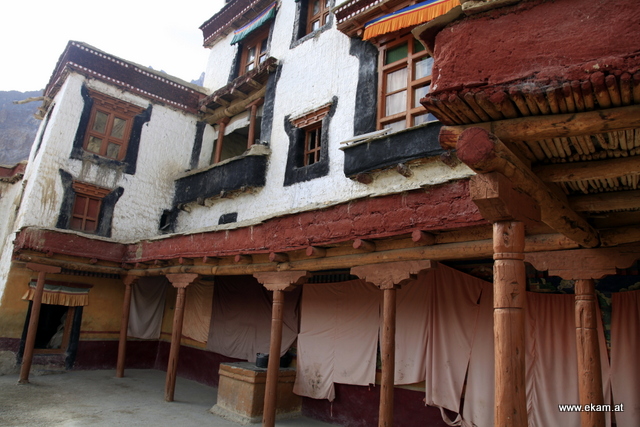 Jimmy was my new friend’s name, a donkey like me and born to carry – but compared to me he had more hair on his head, longer ears and four legs. Shortly before Lingshed, my last destination along the frequently used treks, we had found each other. Him, his “Donkey-man” and me. After we had to go the same way and the pack animals were on their way without cargo, my backpack was loaded on Jimmi’s back for 2 hours and dragged over a pass. Hiking without load on the back is a real pleasure in this region, as I can now confirm from my own experience. 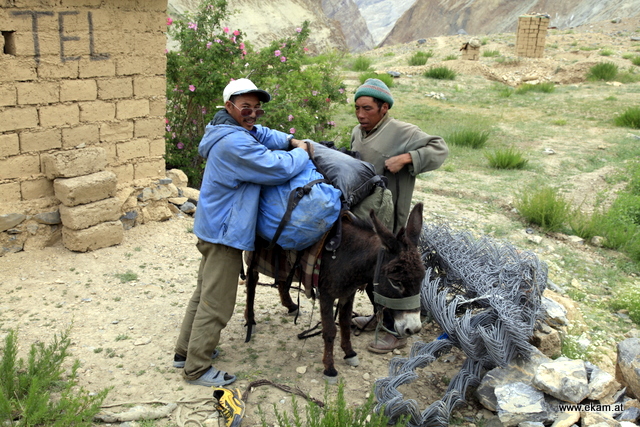 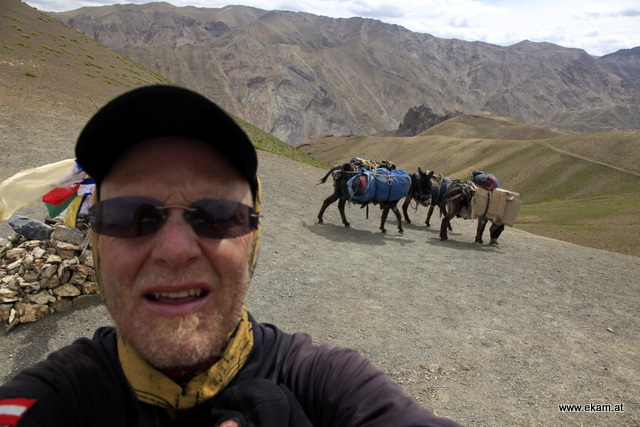 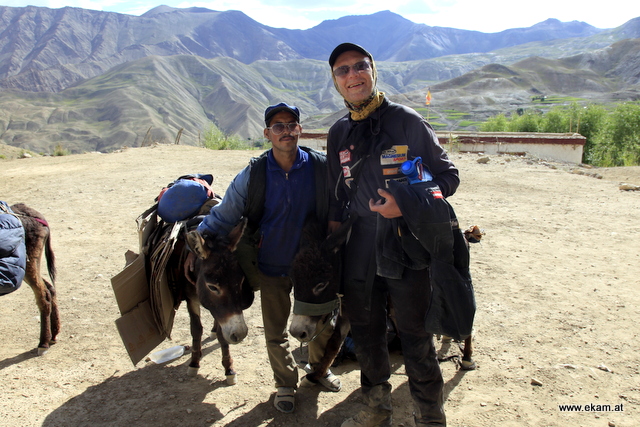