Leh is the capital of the Ladakh region in the state of Jammu & Kashmir. Situated in a green side valley of the otherwise very karstic Indus valley, it is a popular destination for trekkers from all over the world who set off on their hikes or return from tours. Having got off the plane at 3500m above sea level, you have the first opportunity for acclimatisation before heading into southern Zanskar, the eastern Chyamtang area or north to Nubra and western Karakorum.

Leh, like the whole of Ladakh, is strongly influenced by Buddhism. In the centre of the city, right next to the Buddhist temple, you can find two mosques for the steadily growing number of Muslims in the city – currently about 20%. The people here live relatively peacefully next to each other, which was not always the case. Muslims keep to themselves, i.e. they only shop with Muslims, while Buddhists do not draw a religious line here. Buddhists eat meat, but do not (usually) kill animals – so for this reason alone they are dependent on their Muslim neighbours, who have the butchery business firmly in their hands.

The centre of the city reminds like Manali before of Kathmandu – souvenir shops, restaurants, trekking agencies, guesthouses and “German Bakerys” where everything else is available but no German bread, are constantly changing, the same types of traders as in Kathmandu are standing in front of the entrance doors and try to sell their cheap, industrially produced junk as real local handicraft to ignorant and uncritical tourists at inflated prices with simple sayings in different languages. Most of the traders are Tibetans, who can refer to a long tradition of trading, while the Ladahis focus on services and hospitality. The season is short in Leh, lasting perhaps four or five months in the summer, so that the group of traders move on to the south of India – mainly to Goa – in order to do business there. 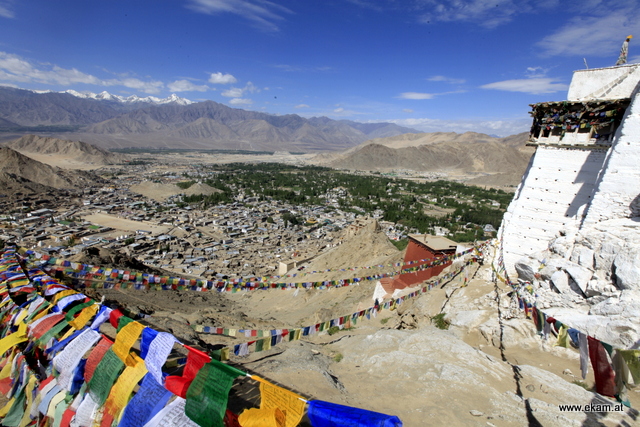 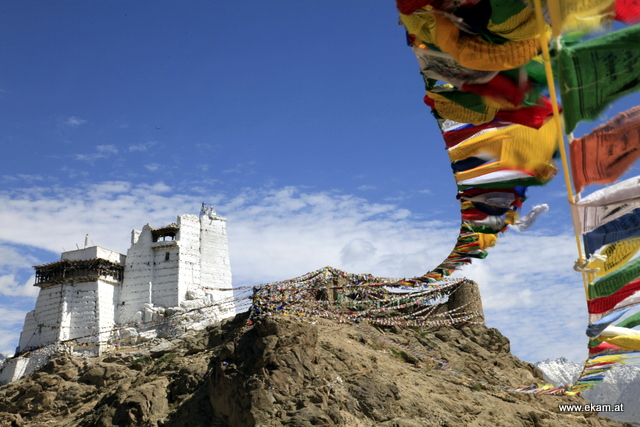 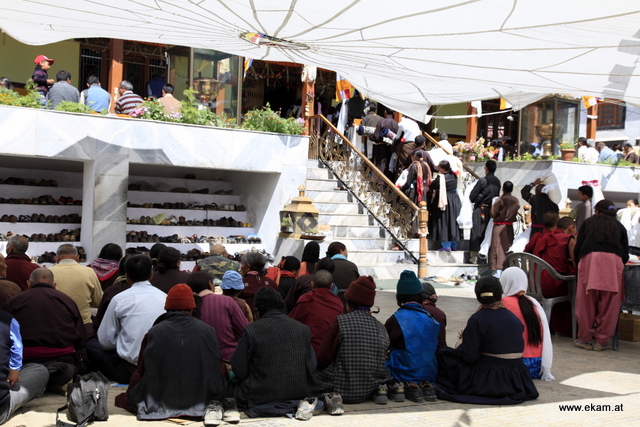 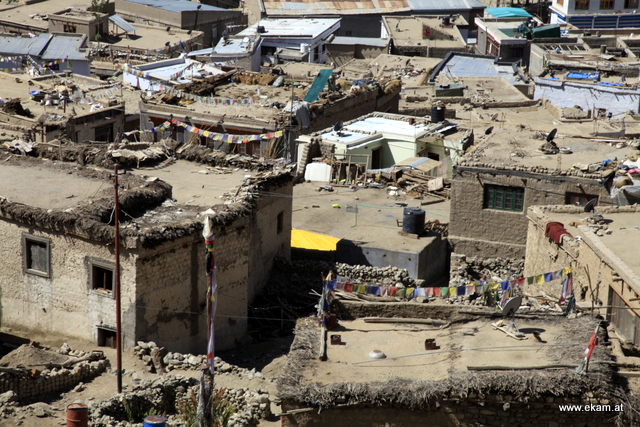 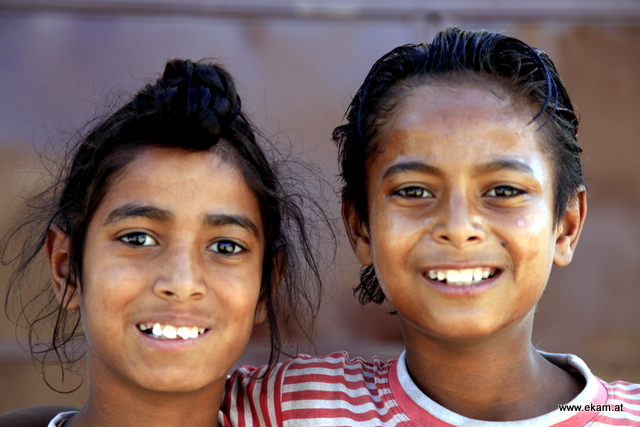 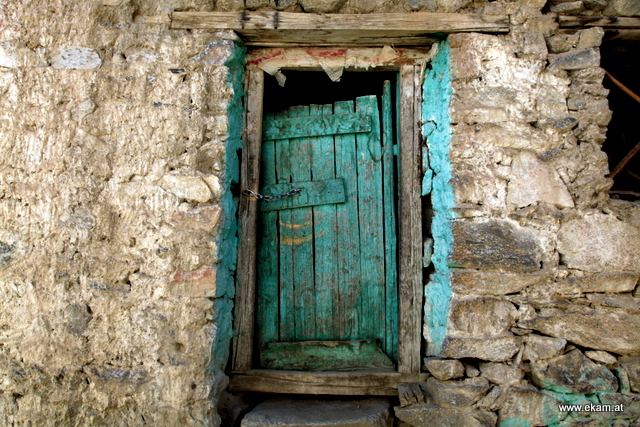 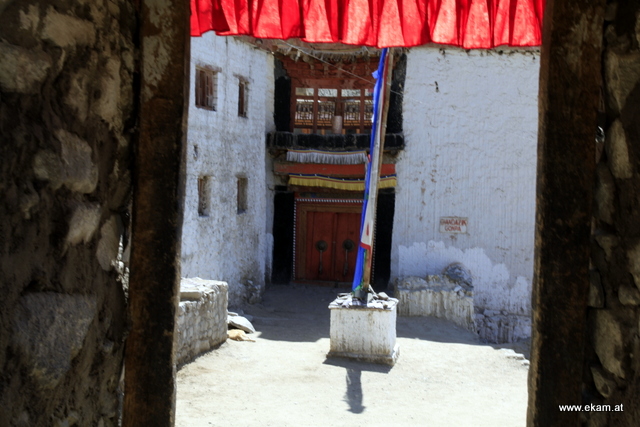 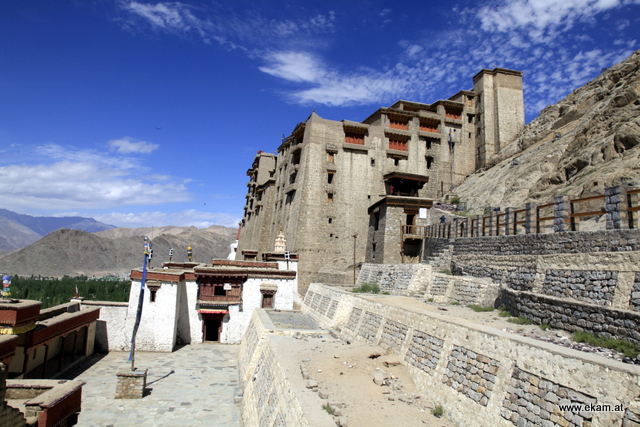 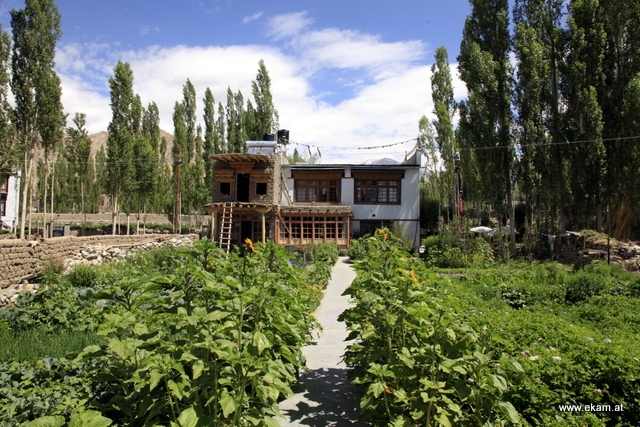 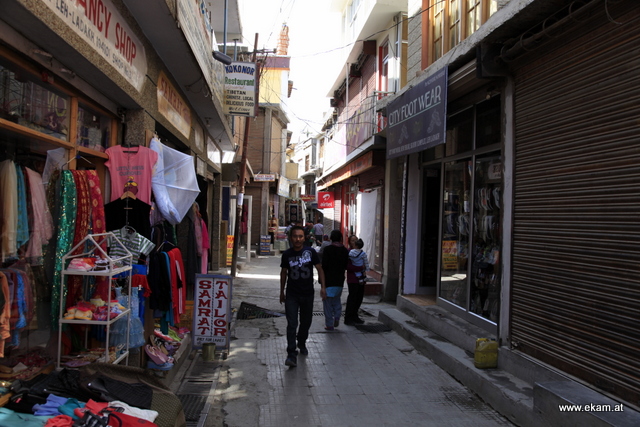 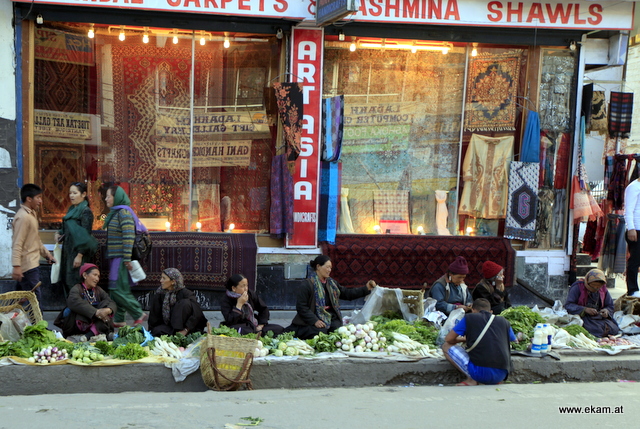 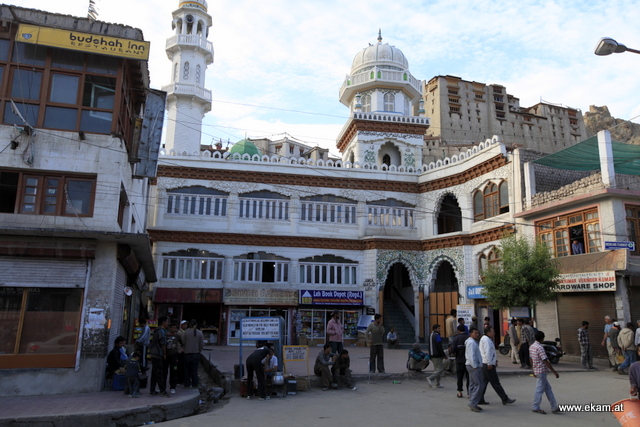 The way from Spiti to Leh was exhausting, had eaten away at the forces and accordingly unpleasant was the first look at the scales. I had already lost 17 kg of body weight since my start in Sikkim, 25 were “available” from the beginning – so there were still 8 kg “free”. And I had not even got half of the distance behind me. When I reached the 70 kg – limit I would stop or interrupt, because I had got health problems on my hikes through the Nepalese Himalayas five years ago. In addition, for about two months – since my time in Nepal – I had been plagued by an unpleasant lower lip, which had been split open by wind, sun and cold. It too needed to be cured before I continued my journey westwards to Kargil and Srinagar. So the focus of these days in Leh was dedicated to personal hygiene – this meant visits to the doctor and eating, eating, eating…

More than 3 days doing nothing, just sitting around is not my thing – which is why a nearby summit had to be used for a 2-day trip. The approximately 6150m high Stok Kangri, in the Stok mountains south of Leh the highest elevation, is a so-called trekking peak – i.e. an inexperienced mountaineer with commitment and fitness can easily reach the top. 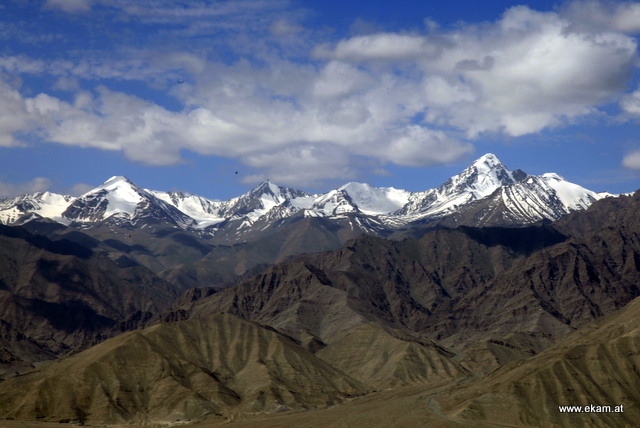 Non-acclimatised tourists from nearby Leh take on average 4 to 5 days to climb up and return to Leh. Once I was well accustomed to the altitude, I could easily complete the tour in two days. A “light” version of my rucksack on my back was from the village Stok at 3300m altitude on the first day relatively quickly reaching the 1500m higher base camp. The attractiveness of this mountain was immediately recognizable by the countless groups and their tents in the camp – it was hardly possible to find a good place to camp, one tent followed the other – a somewhat unusual situation after the loneliness of the last days and weeks. 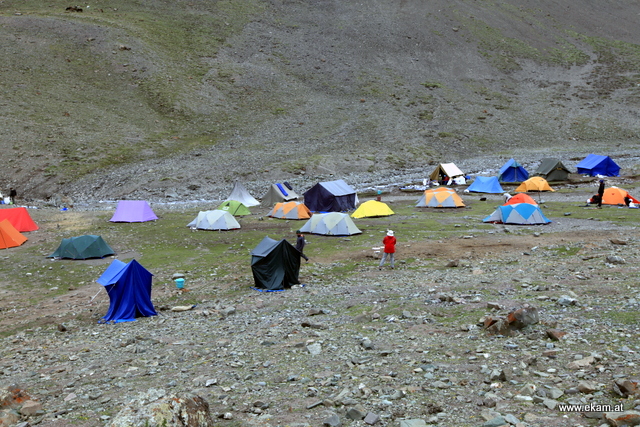 At ½ 2 o’clock in the morning was departure – by the glow of the moving headlamps it was easy to recognize that there were already some groups led by guides on their way to the summit. I had no idea about the exact route or how long the ascent would take. My only knowledge was that to cross a glacier and to master a relatively steep snow gully, for which one needed crampons, before we went over a rocky ridge that was about 1000 m deep on one side to the top. I was also told that normally groups from base camp to the summit would take about 7 – 10 hours.

With camera, tripod and crampons strapped on, I was able to start relatively quickly – after the 40 kg load on my back had proved to be a good training in the past weeks, the ascent without this additional weight was an easy thing, quasi a “free flight” to the summit. All the groups in front of me were quickly caught up and overtaken – except for a group of 3 young men who were also on their own, without a guide, and had also set a very brisk pace. After about 4 hours and at about the same time they reached the summit, it was quickly clarified that these mountaineers were three Salzburgers who had been trekking here in Ladakh for a long time. Nice guys – real mountain fairies.

The weather was – in contrast to the last days – wonderful, the people who tried to climb the summit the day before had to turn back shortly before because of fog and snowstorm. The 3 guys from Salzburg had informed themselves about the weather in Leh via internet and waited 3 days in the base camp before they climbed up to Stok Kangri. As usual, I hadn’t given it any special thought and, as so often on this trip, I had been really lucky. Ice cold wind and crystal clear view – that’s all you need when you’re standing on a summit and as a reward for the effort you can enjoy the wonderful view. 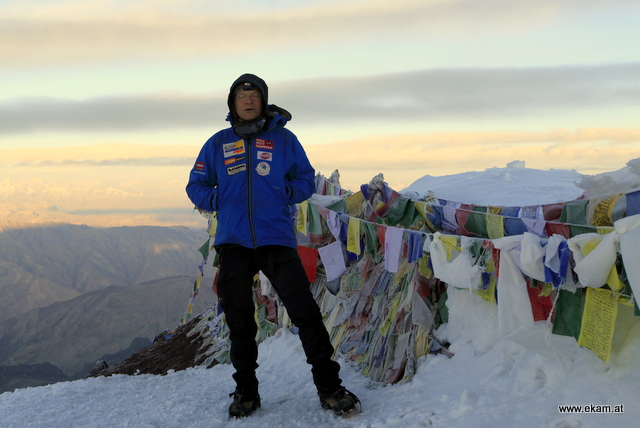 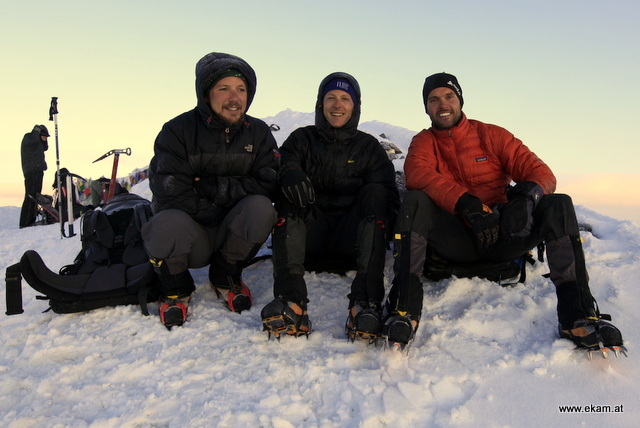 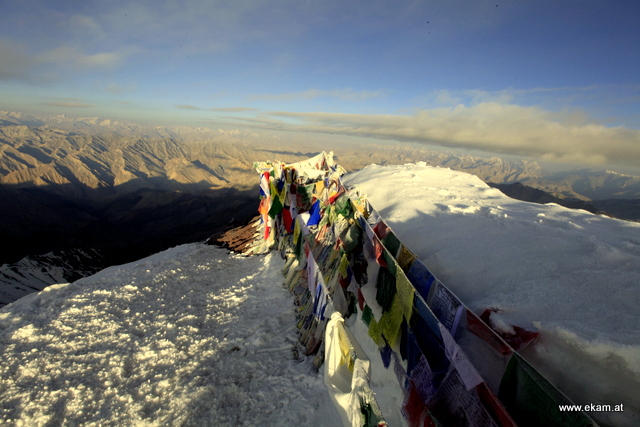 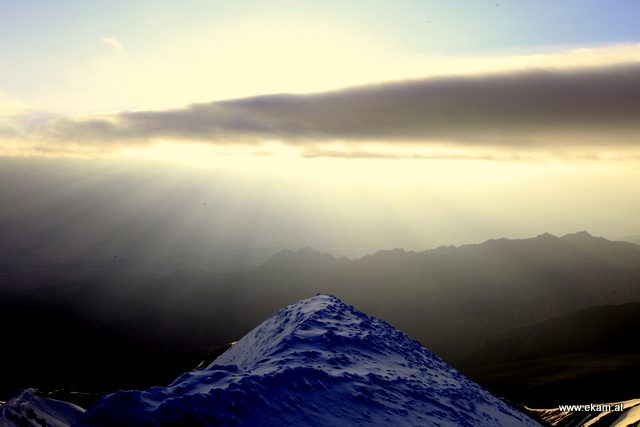 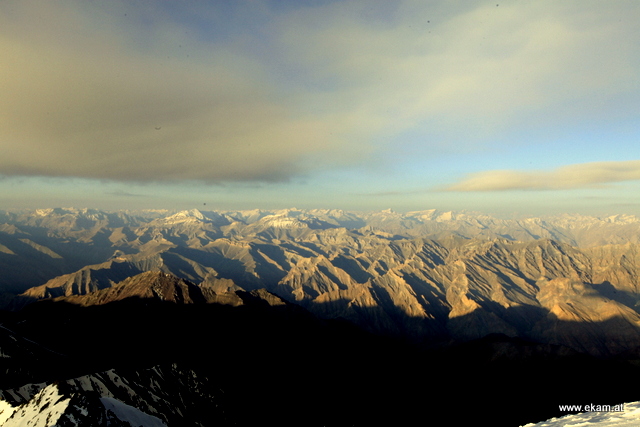 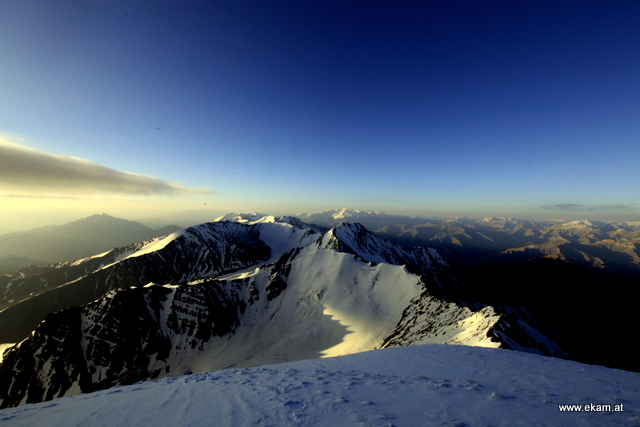 On my departure, my Bine and friends had given me a scarf full of signatures and congratulations as a souvenir – here was now the opportunity to take the scarf out of my pocket at the first summit victory on this trip and hold it in the camera as a small thank you – I hope that especially in Nepal some more photos of this kind will be added – at least it is planned. 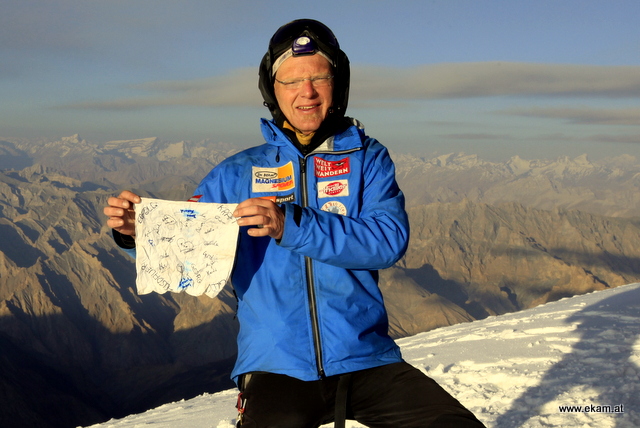 The same day I had gone back to Leh and had unfortunately suffered a setback in the recovery of my lip on that trip. So I had to hang on with a few more days of extensive meals until I was feeling well enough to be able to take the next trek over parts of Zanskar westwards towards Kargil.

In the meantime, the Dalai Lama had arrived in Leh, the city was in a state of emergency. Anyone who could still somehow move on their own tried to take a look at the Buddhist religious leader passing by in his car along the road from the airport to his residence just outside Leh. The religious activities in the monasteries of the city were accordingly lively, with masses of believers flocking to them. I myself am a “non-believer” in relation to all religions, I simply lack the understanding of many things that are preached – probably a lack of sufficient comprehension. Nevertheless such a Buddhist ceremony is something very special, a colourful round dance with a special flair. It is fascinating to watch with what devotion people follow the teachings of the Lamas and Rinpoches. Those who could not find a place in the prayer room of the monastery sat outside in the courtyard and followed the mantras and prayers over loudspeakers. 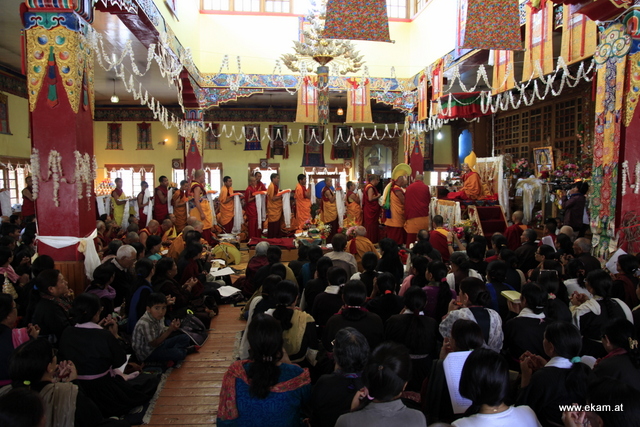 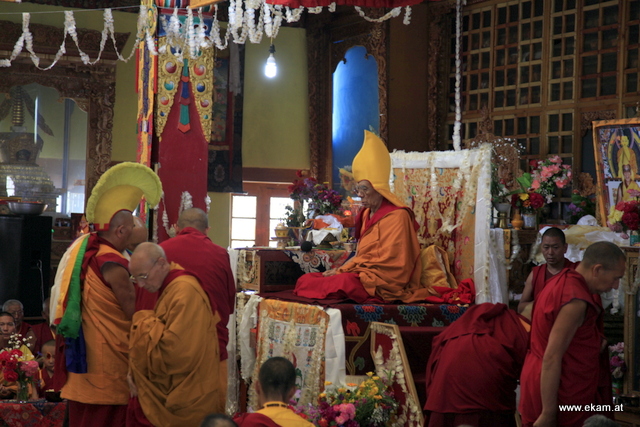 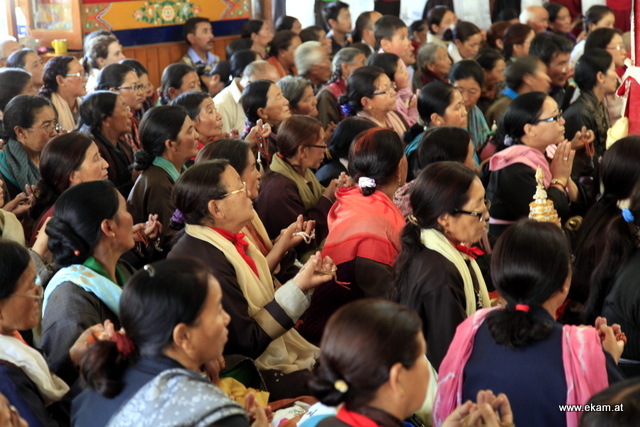 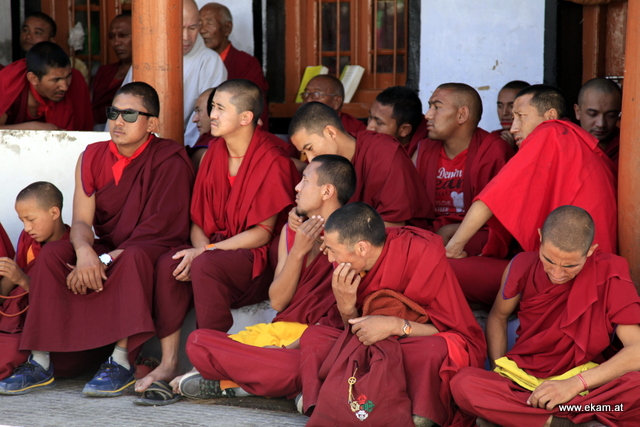 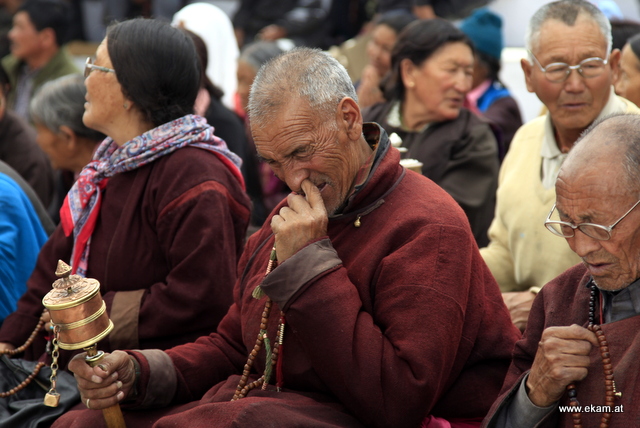 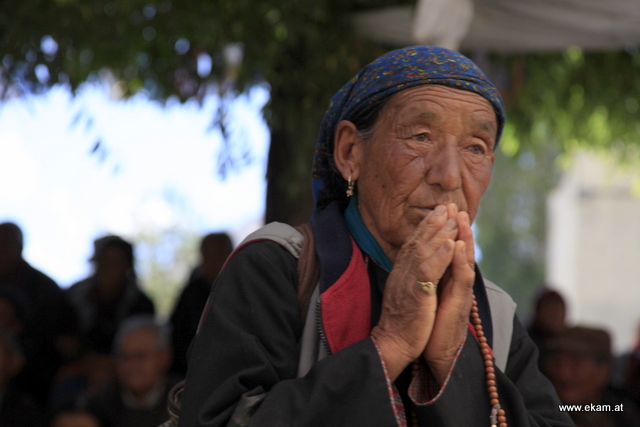 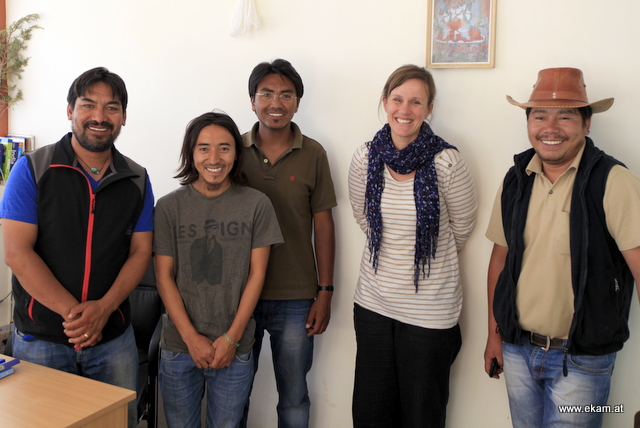 The stay in Leh was longer than planned – probably also because I was so well looked after and cared for by the local representatives of Worldwide Hiking, Daniela and Tashi Wangeil and their team. Nevertheless I had to continue, Zanskar and the way to Kargil with another 14 passes was waiting for me. From this place a hearty thank you to the nice ladies and gentlemen in Leh.

The next trek was a tough one, especially because there is something sensational to report about it. See you next time.