The entry into Azerbaijan was less complicated than expected. After I had already learned from Tom Büchi via email that the motorcycle had to be insured for 5 USD and that it was only allowed to stay in the country for 72 hours, there were no more surprises. With Storm Graz a common topic of conversation was found at the border station, which accelerated the clearance process a lot. It is actually unbelievable how many people in this corner of the world still know the club from the Champions League days. As soon as I say that I come from Graz, I am asked about football. That was also the case in Turkey and Georgia, but especially often here in Azerbaijan. 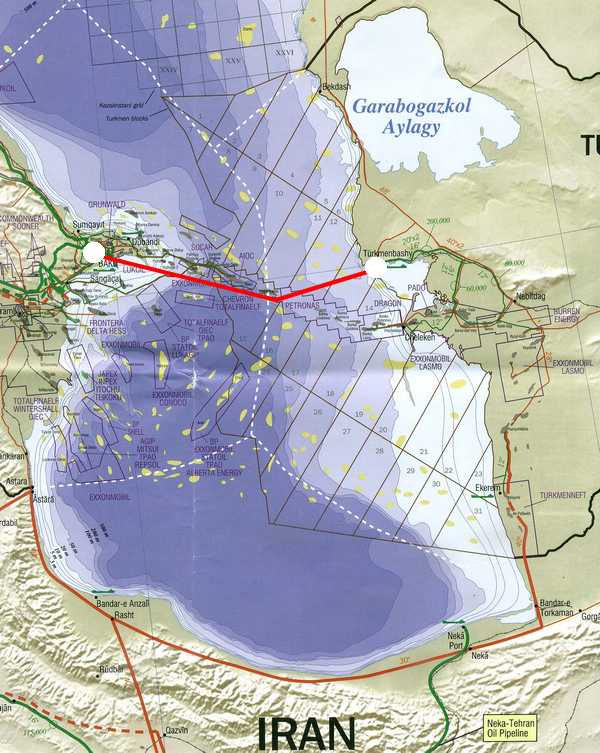 Baku is a prosperous modern oil metropolis on the Caspian Sea. The country draws its wealth from its oil and gas deposits, the skyline with its countless banks, first-class hotels and upscale shops, the overcrowded streets with luxury carriages are proof of the bubbling petro-dollars. The money is invested, there is brisk construction activity in the centre of the city – no sign of economic crisis. Especially the well-kept and clean impression that Baku, unlike many other cities in this region, leaves behind, is striking. The people are consistently friendly and nice, dressed in western style and although the majority of the population are Muslims, you see very few women with a headscarf. 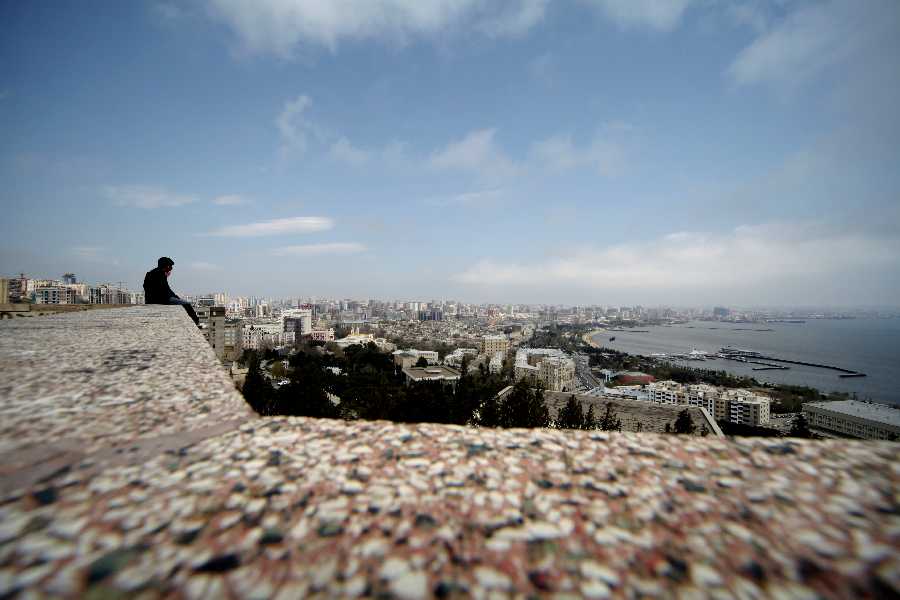 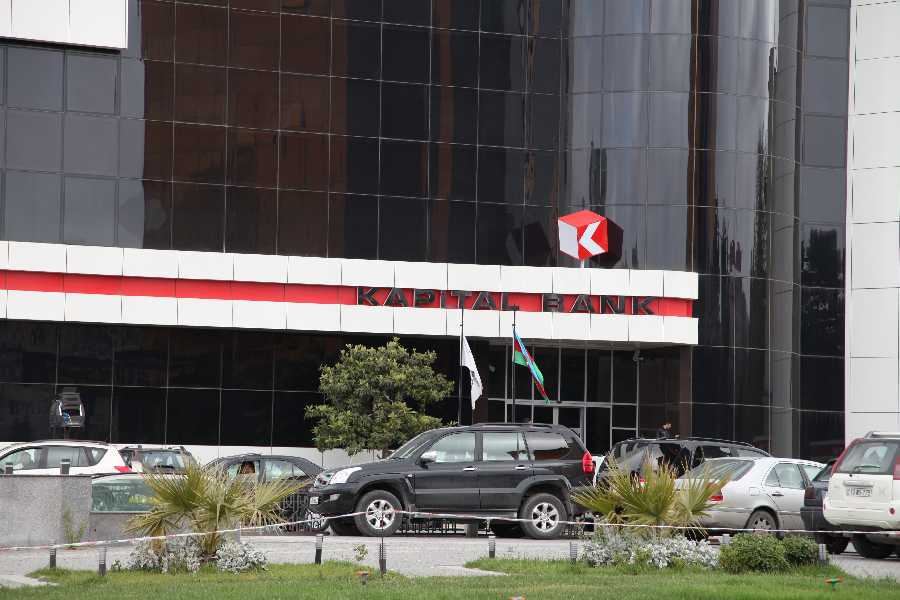 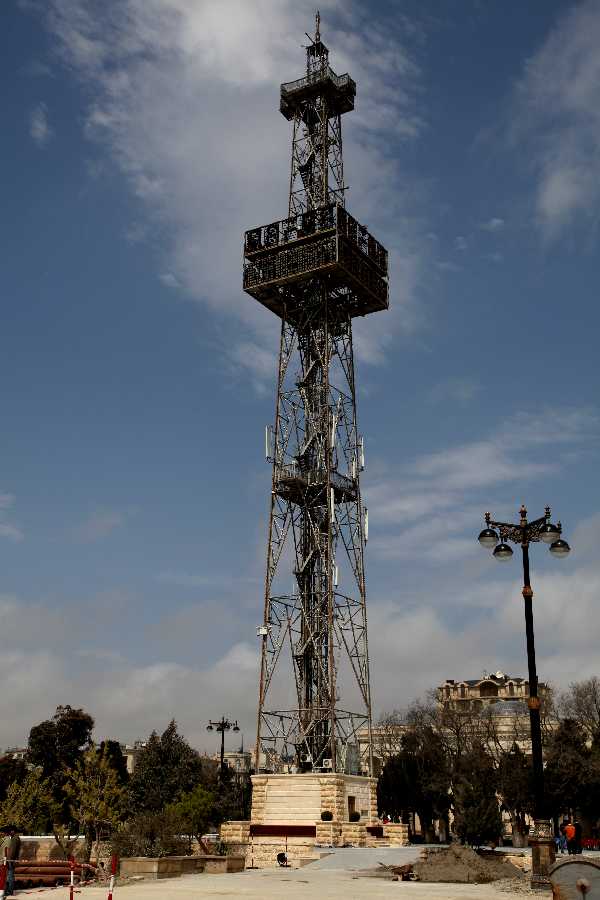 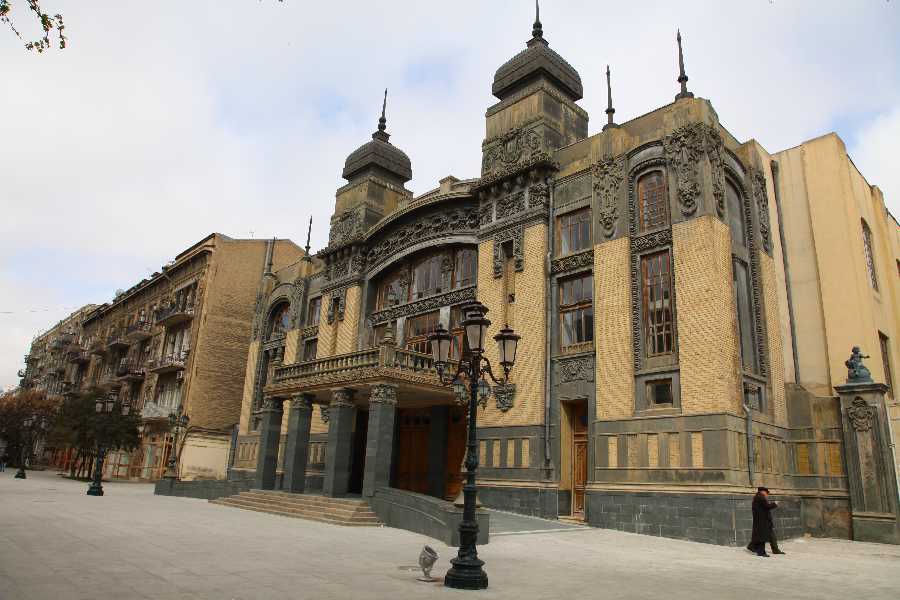 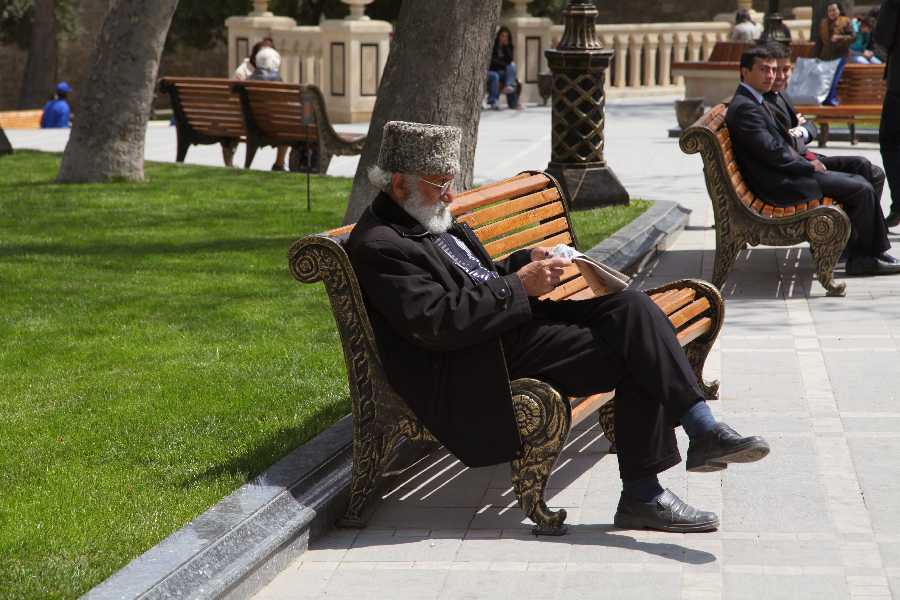 Beautiful wide roads and expensive cars are unfortunately not automatically a guarantee for a cultivated driving style. Riding a motorbike is absolutely a challenge in Baku, I was approached by 2 Azeris who sold their motorbike again because it was too dangerous for them. They stop at the traffic lights, but as soon as the light turns green, it is just as reckless as a start in Formula 1. In the crowd they accelerate to the highest possible speed and fight for every place until the next traffic light.

For me, this was a convincing argument for visiting the city exclusively on foot and by taxi. 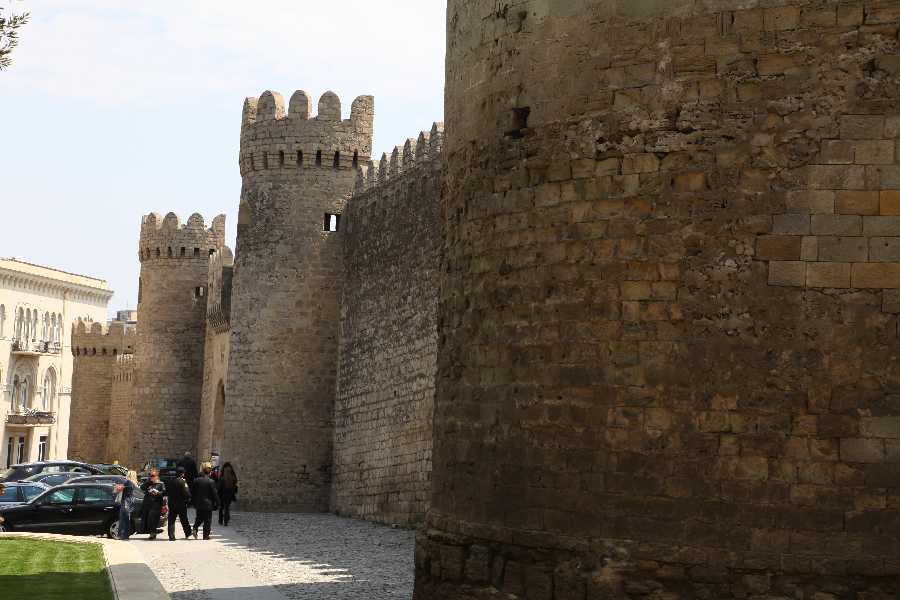 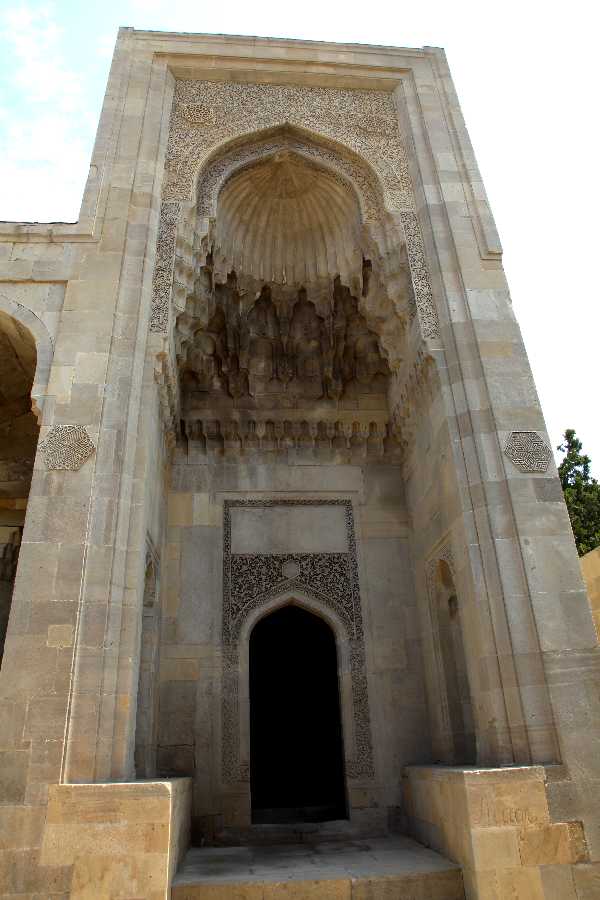 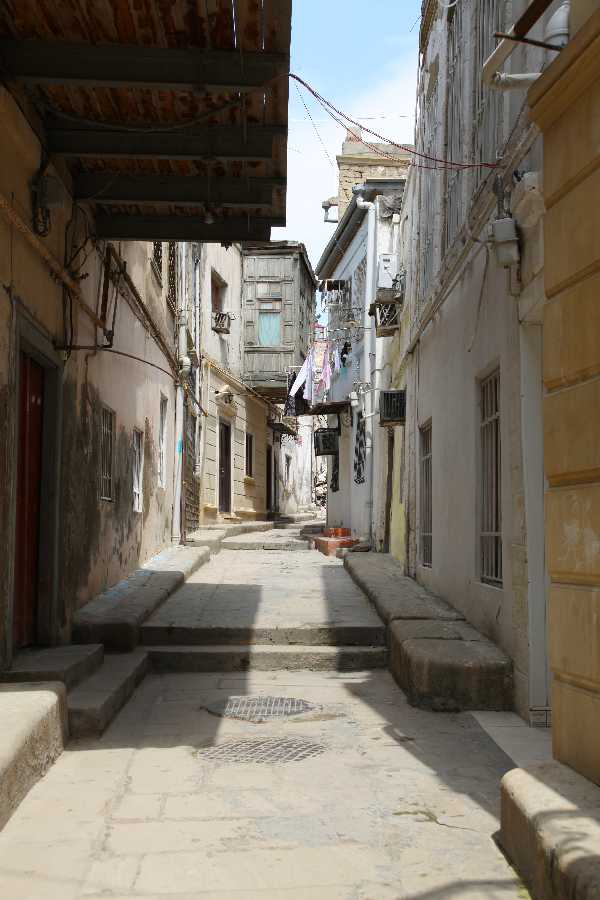 What is still noticeable is that there are apparently no postcards in this city and internet cafes are only sparsely hidden in cellars. W-Lan connections in bars or cafes are not offered, but one can get them in the luxury hotels. However, even at astronomical costs, per hour about the same amount is charged as I pay at home for 2 months of internet access.

With the crossing of the Caspian Sea, after approximately 7.500 km my journey is finished. From this point the actual journey through Central Asia begins, along various routes of the historical Silk Road to the Pamir.

At the same time, this sea route was also the first great unknown. In the course of preparation I had received a lot of different information from the internet and the Lonely Planet about the ferry connection. True horror stories, the core message was the same throughout – from irregular timetables to waiting times on board for days on end. Such a case would be a medium catastrophe for me, my time window for a ferry crossing was extremely narrow – on the one hand I had only a limited waiting time for a ferry connection because of the 72h for my motorcycle, on the other hand the restriction by the 5-day transit visa for Turkemenistan starting on May 1st or 2nd.
Therefore my first contact point in Baku was the ticket office of the state ferry company. With hands, feet and a few chunks of Russian I could find out there that I should be there at 10 am on the day of the actual departure, I would then get the ticket. The ferry transports railway wagons, should arrive at 11 o’clock, is immediately unloaded and reloaded again and starts the crossing to Turkmenbashi at about 14 o’clock.
Exactly the same way it arrived on April 30th – without any delay we went out to sea after loading.
The crossing for the motorbike and me cost 200 USD, about 20% were lost as bakshish. The nice man at the ticket counter insisted on cash payment in USD, the invoice was issued in Manat, the local currency. Because of his creative exchange rate he had exactly 40 USD left as expenses. As I did not want to endanger the crossing, I only discussed half-heartedly with him. 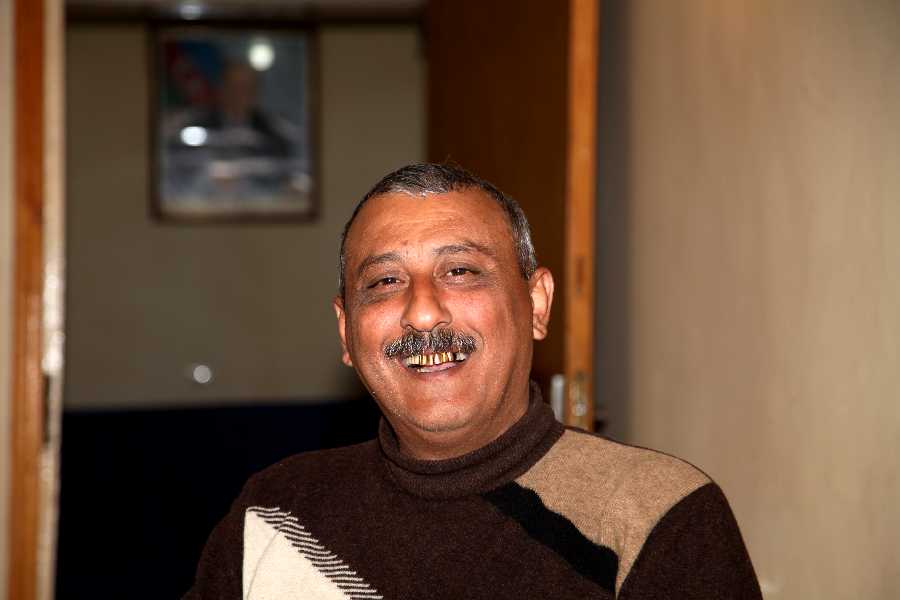 The “famous” ticket office for the ferry to Turkmenbashi 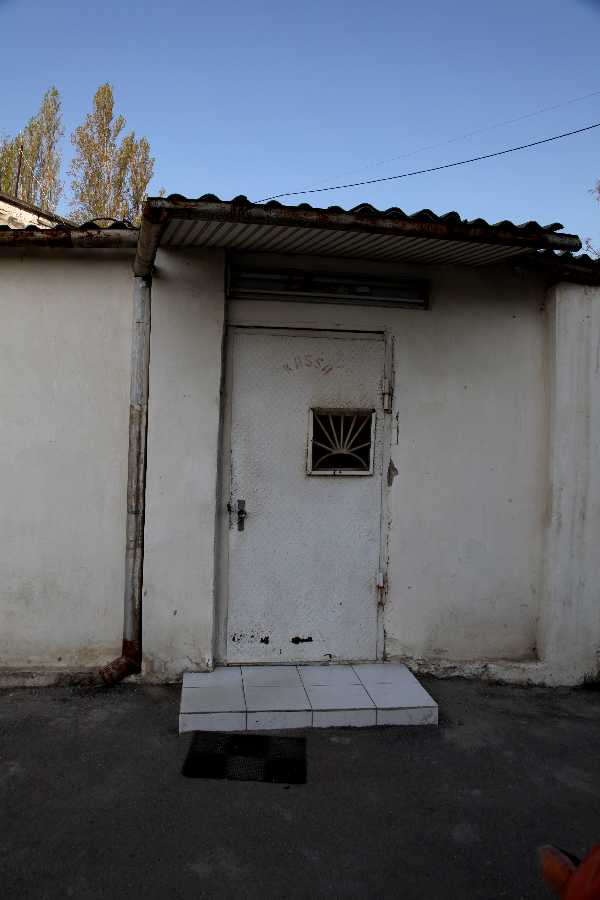 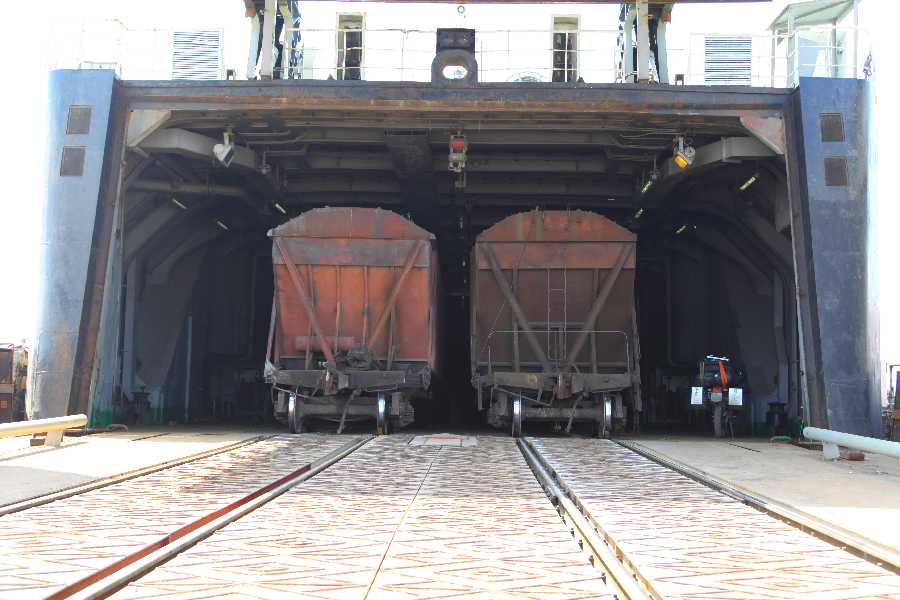 Apart from me there were 3 older ladies from Turkmenistan, who apparently came back from a shopping trip in Baku. From the crew I could learn that altogether 9 ships are sailing daily between these two ports, with all but 2 taking all passengers. Of the 32 crew members, one spoke some English and one some German. The crossing was calm, we had excellent weather, and the temperatures gave me a first taste of what to expect in the deserts in the coming weeks. The route led us during the night along illuminated and gas flaring oil platforms. 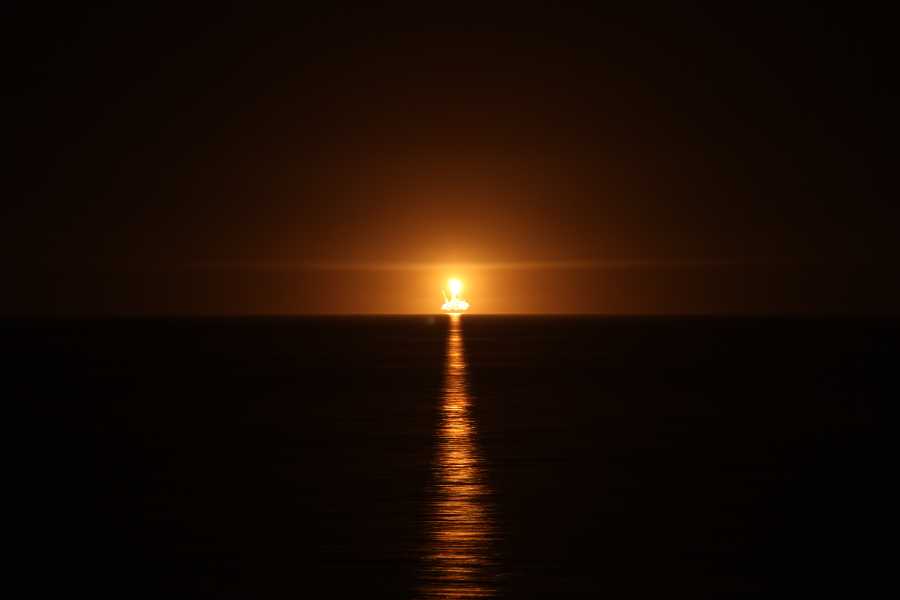 For the 315 km we needed 14 ½ hours, around ½ 5 o’clock in the morning we were in Turkmenbashi as predicted. I had set my alarm clock and was fully motivated after 2 hours sleep when the anchor chain rattled into the water. Fully adjusted and both hands loaded I was standing on deck when I had to recognize by the lights that the harbour was at least 3 km away. We parked in front of the harbour entrance as one of 20 ships – this was to remain so indefinitely. The reason was that in the port of Turkmenbashi only 2 ships can be loaded and unloaded at the same time, but far more ships call at the port. According to which system the ships were called into the port, or how long it would probably take, nobody could explain to me. My question, what we can do now, was answered briefly and concisely with almost Buddhist serenity: Eat and sleep! 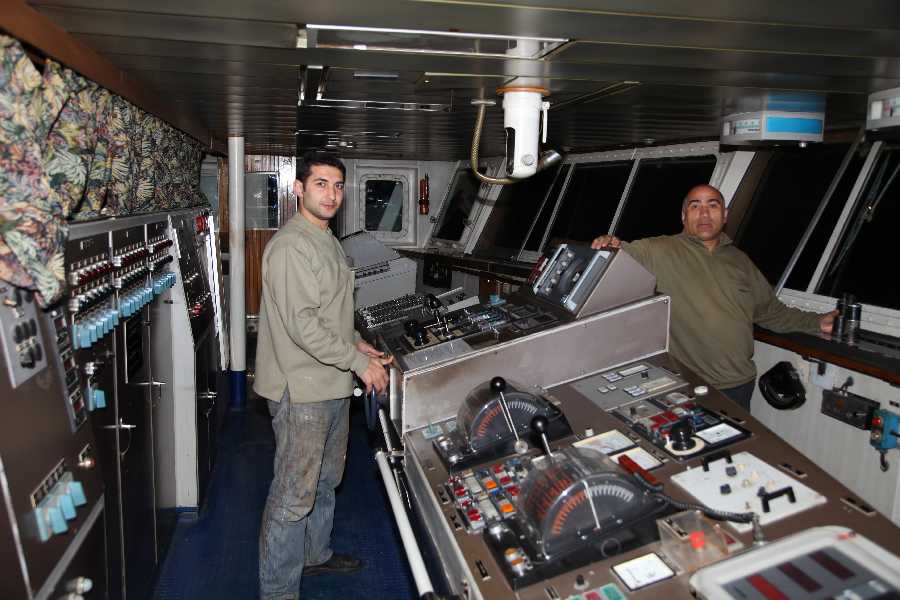 The crew – working on the bridge…

…and when sleeping, eating and above all drinking.

As I then found out in the course of the day, at this point in time 2 ships had already been lying in front of the harbour for 15 days waiting to enter. Should this happen to us, I would have had a massive problem. As I had to leave Azerbaijan officially before entering the ship, I would have been trapped in an inland sea on a ferry in an extreme case without having a single valid visa for one of the bordering countries. Getting out of such a situation without having to interrupt the journey is certainly an exciting and cost-intensive task. 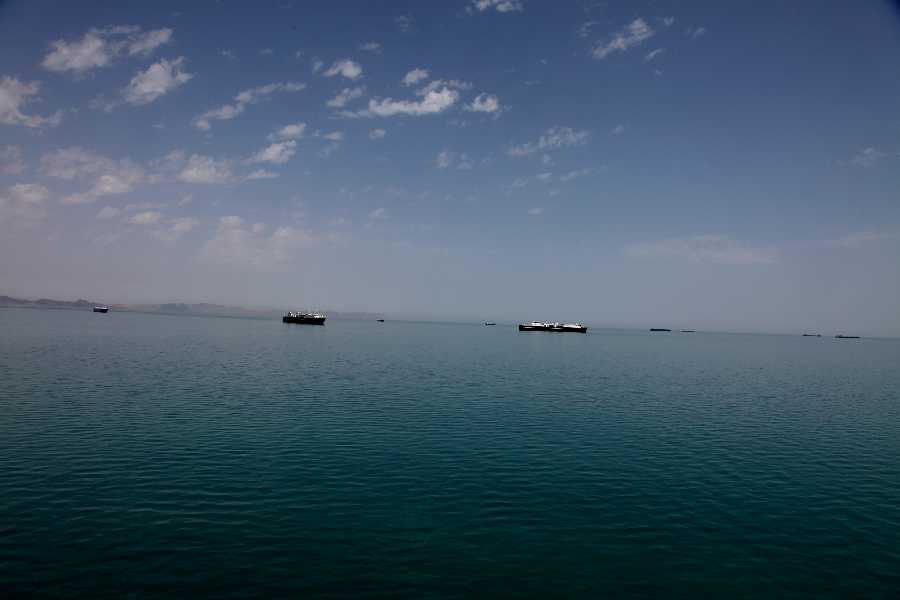 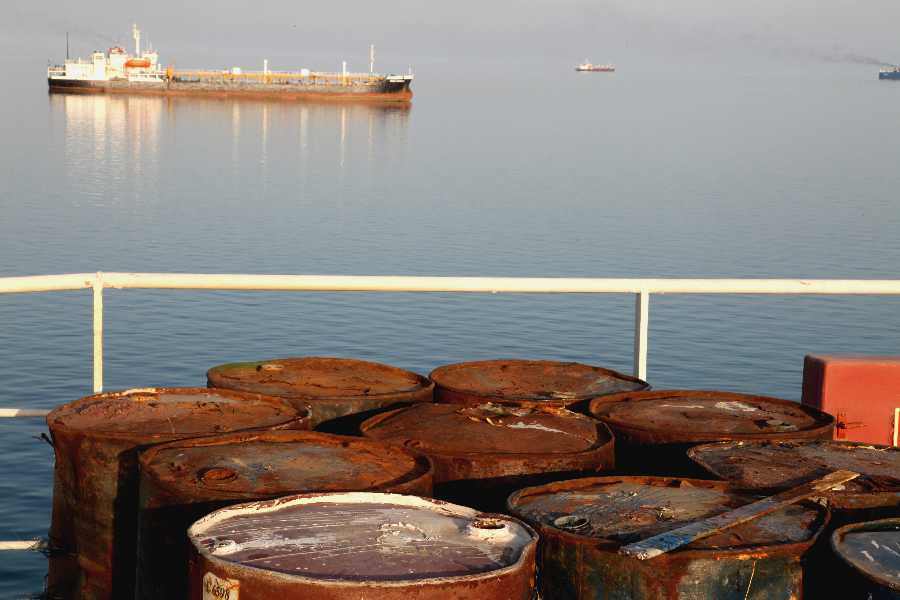 Waiting ships off Turkmenbashi – one of the ships that had been at anchor for 15 days.

Finally it was not so bad after all, because after about 20h waiting time we could enter the port of Turkmenbashi at 2am the next morning. From now on I was finally in the “Stans”. 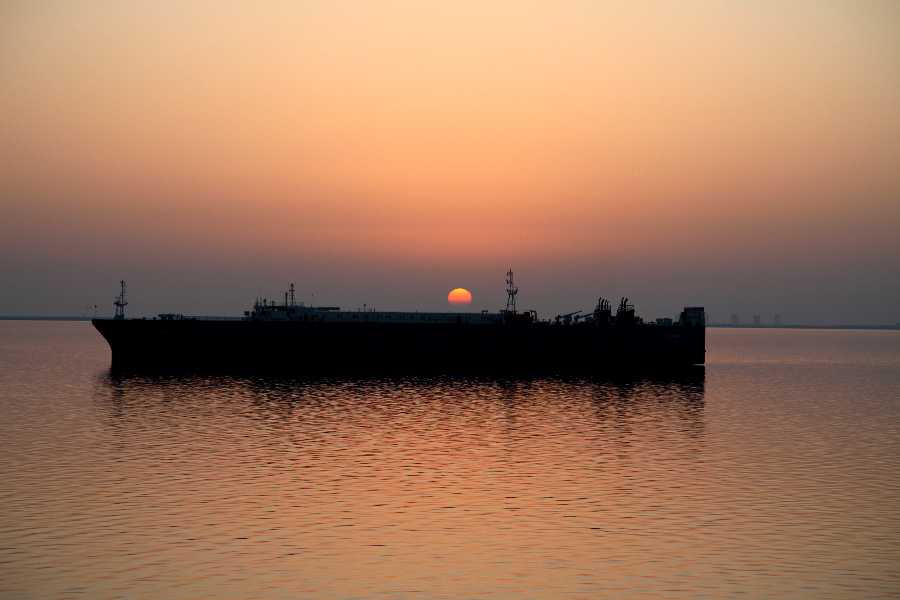 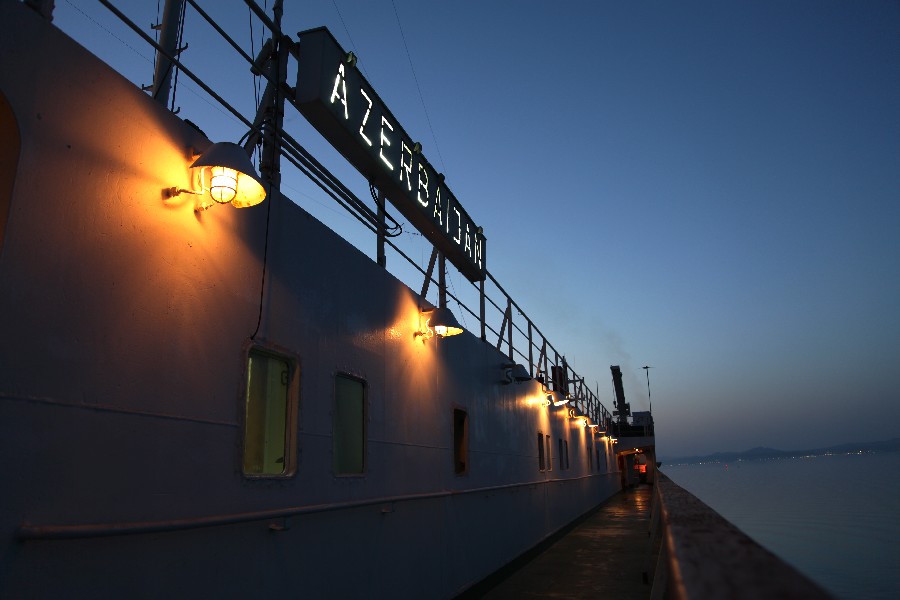