After it had rained in Tbilisi for some time, I combined the excursions with the trip to Baku. 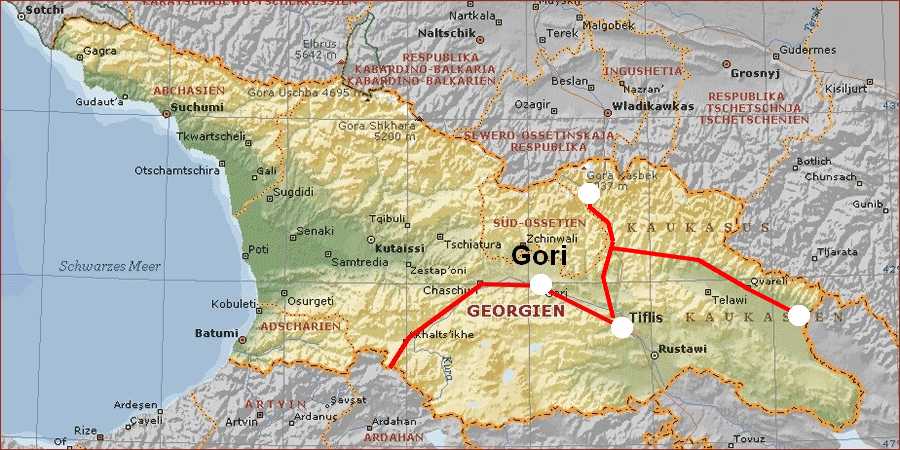 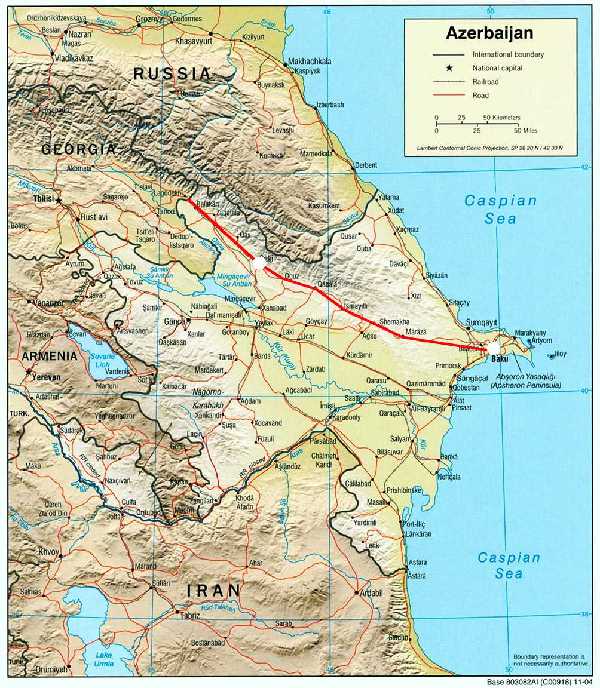 The visit of the Stalin Museum in his birthplace Gori was not worth the trip for me. The museum must have been created during the time of the Soviet government, because the magnificent building and the roofing of the birth house are witnesses of the personality cult of that time. The ladies who run this museum were very nice, but left the impression as if they had already been here during Stalin’s lifetime.

Stalin’s original workstation from the Kremlin…

…along with buddy Lenin…

…and his birthplace under a marble canopy.

Much more interesting was the drive towards Kazbegi, a small village at the foot of Kazbeg gori, a mountain with 5033m height directly at the border to Russia in the middle of the Caucasus. The signposts are the same as the menus, each route seems to be well marked, but you should be able to read the signposts and follow the Military Highway northwards along the border to South Ossetia, which was annexed by Russia last year. Not even the Georgians themselves can enter there. Some towns along this road are still occupied by the Russians on Georgian territory. You can drive past or through them, but you cannot leave the road.
If you can’t read, then it usually happens where you shouldn’t. And if you get lost, you shouldn’t look for shortcuts in such an area that lead through Russian territory. At some point it was over – I was sent back and had to start searching again.
The way to Kazbegi was found soon, the road was a dream to drive because of the view and the low traffic, I could still conquer the pass before Kazbegi despite snow and ice. Unfortunately I had to give up and turn back. A tunnel made it impossible to continue – about 300m long, unlit, downhill with a 180 degree bend and surely covered with ½ m of ice. I went in for a third of the length, then turned around and got out again – my Kati slipped three times. Each time 260 kg is hard work, especially on the slippery ice. I would never have made this turn without any visibility on such a slippery surface. 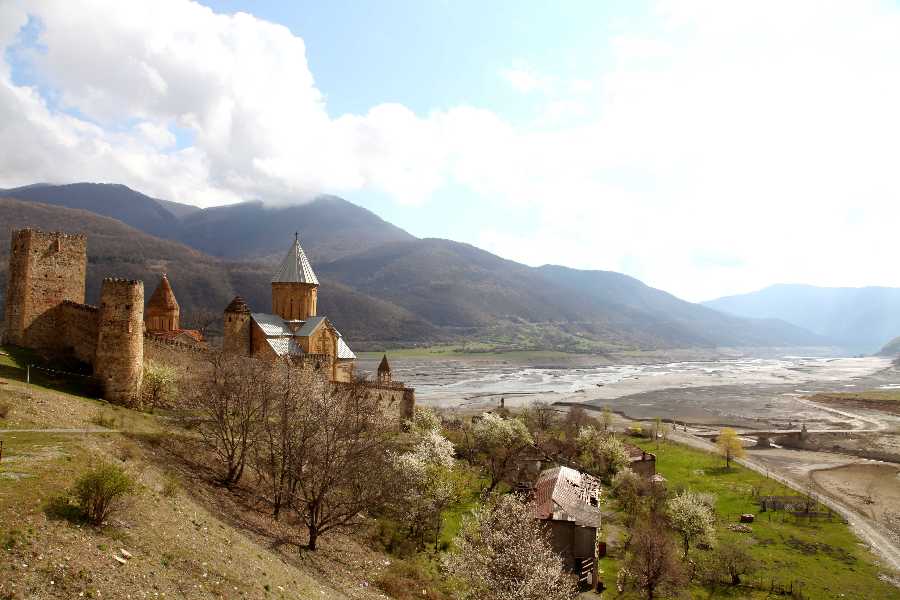 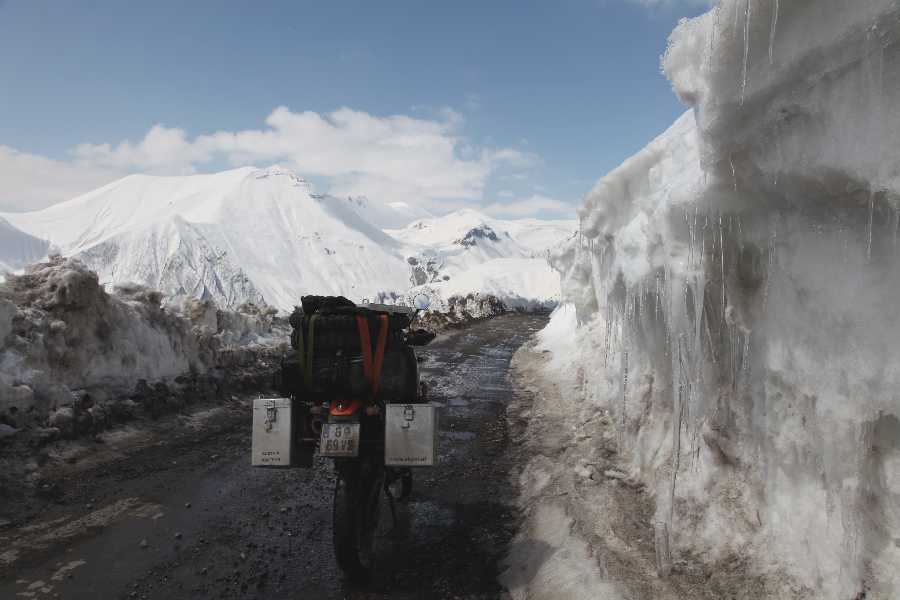 The passport was still manageable, but…

…that tunnel was the end of the fun, because…

… with the ice pack, there was no way to get through on a motorcycle. 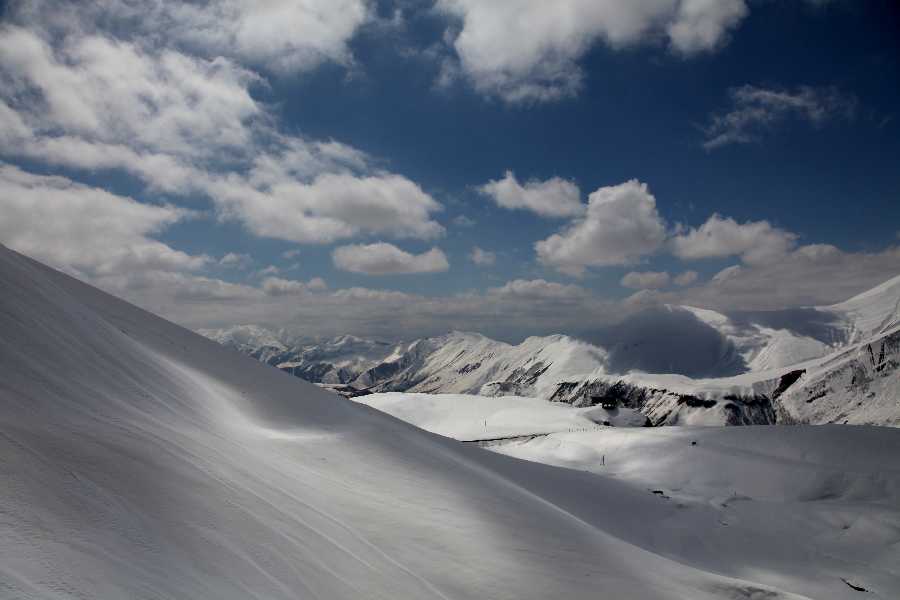 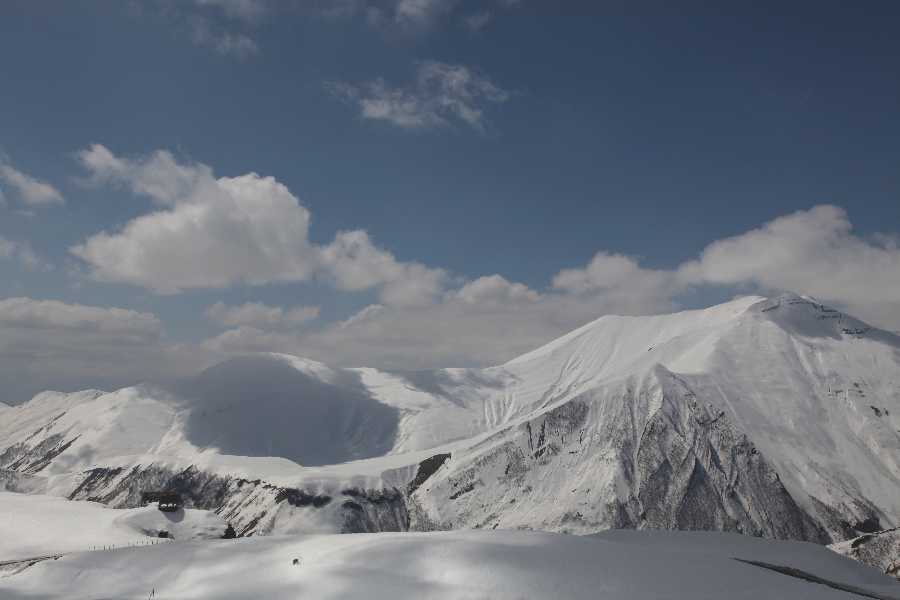 The magnificent view from the pass to the snow-covered mountains of the Caucasus.

On the way to Azerbaijan via a side road through the mountains I was first rewarded with 80 km of clay track, which will make every Enduro fan click his tongue. Shortly before Lagodekhi, the stage finish, I had to pick up my Kati for the 4th time that day. In a narrow serpentine on asphalt too fast and too deep – the left aluminium suitcase is totally bruised, but prevented worse for my leg. 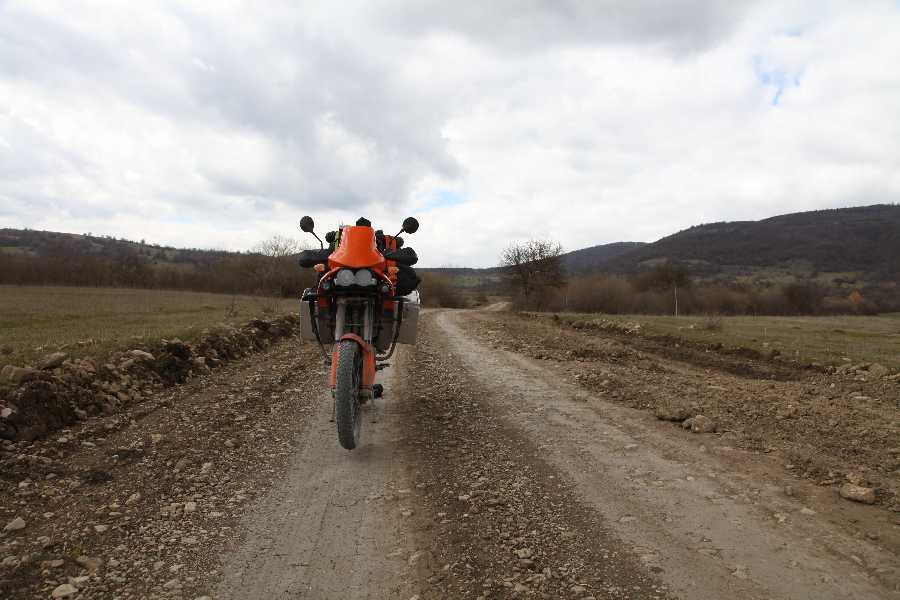 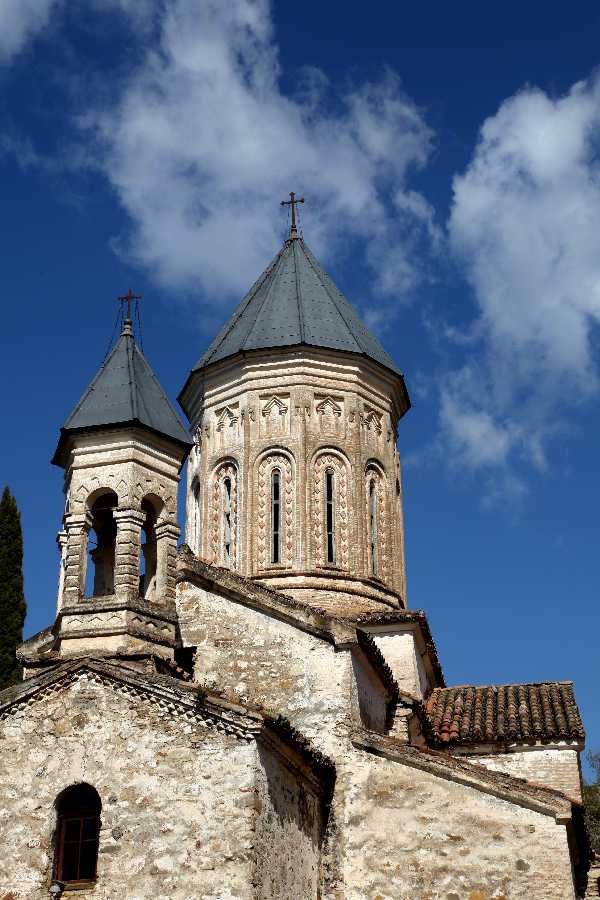 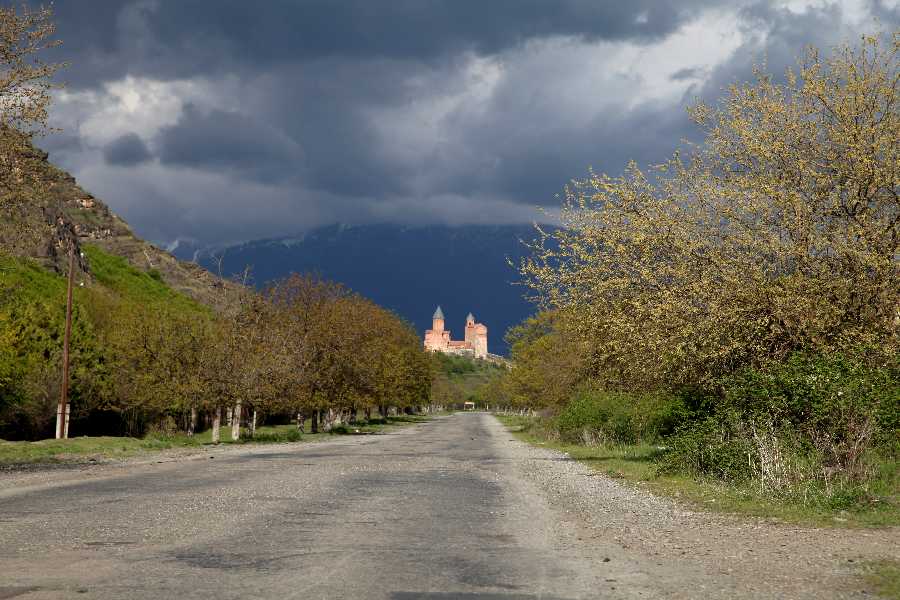 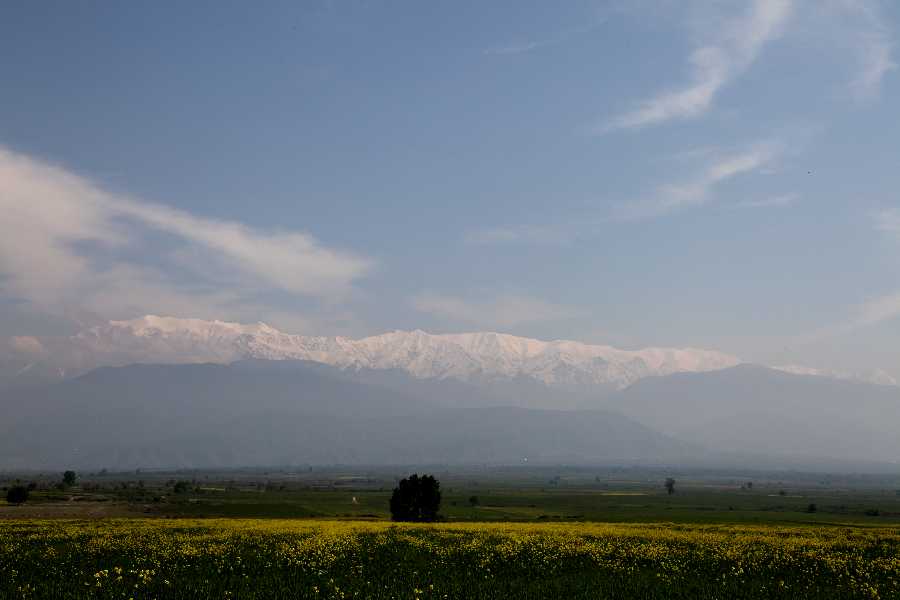 The rest of my journey through Azerbaijan along the southern foothills of the Caucasus went without further problems. After a short stop in Saki in to visit a Kervanserai of the Silk Road, I arrived in Baku as planned on 28.04. at 18:00. 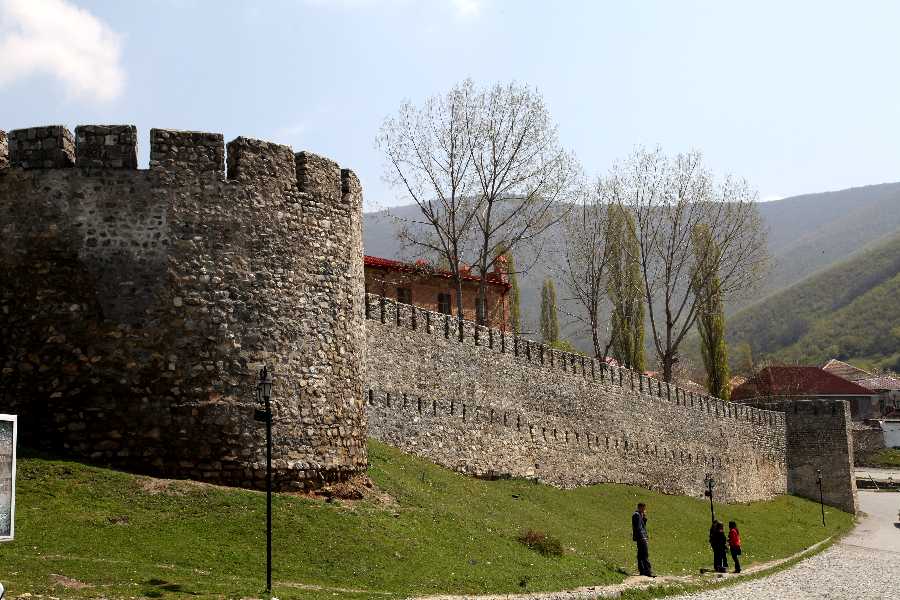 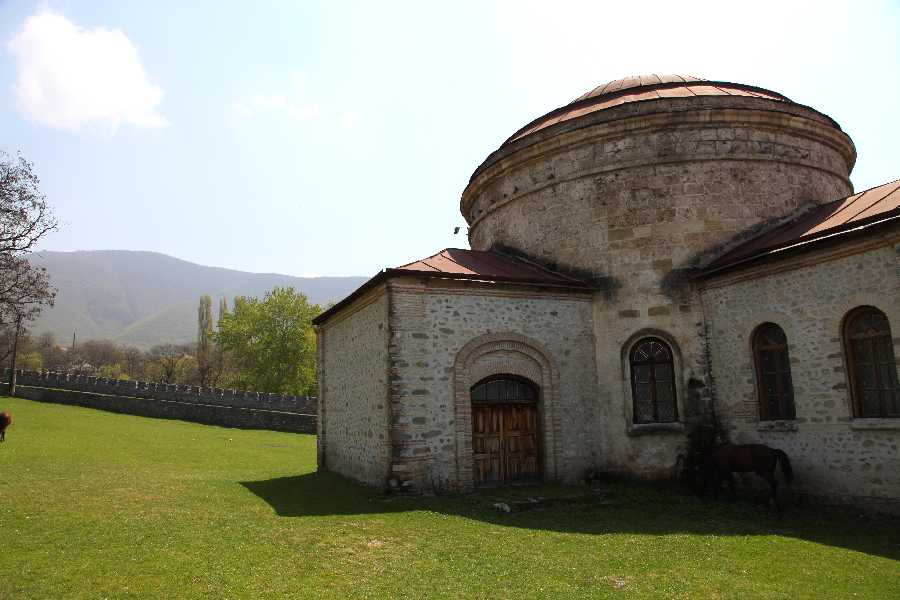