Although individual route adjustments are part of the daily routine of such a journey, it is annoying if the first part of the journey is already completely different than planned. Originally, I had planned to travel via Hungary, Romania, Moldova, Ukraine and Russia from the north to Azerbaijan, to take the ferry across the Caspian Sea to Turkmenbashi in Turkmenistan. Four days before my departure I had now learned that I had not been issued the necessary visas for Russia and Turkmenistan.

3 ½ Months before the planned start of my journey, in mid-December, my visa preparations had already begun. Since I wanted to avoid the consular channels in Vienna from Graz, I commissioned a visa agency in Vienna with the formalities for the visa applications on the recommendation of a well-known travel agency.
The gentleman from the company Visum Support was very willing and sounded competent at the first contact, explained that my request was no problem, recommended that I have an additional, second passport issued in case it would take longer at one or the other consulate and promised to get in touch with me again within a week after obtaining some information.
I organized my second passport and when I asked him in a friendly way how things were going after two weeks, I heard that he had inquired, everything went well in the schedule, he would send me some more documents and then it would start. The next time I phoned him after another week without the promised documents he was unfortunately no longer reachable, his colleague explained that he was constantly talking to customers, must not be disturbed and the mail server was broken, you could not send or receive emails.
A few days later, after another three attempts to contact him, I insisted that I be called back, but then I found out that I could not handle such pressure from my side and so I resigned from the contract.

It was clear to me that I had already come across the black sheep of the industry at the first attempt and therefore I didn’t let this stop me from contacting the next agency, because it can only get better.
My choice was Veloce-Visumservice, and let me tell you right away – the promises were the same, the ladies sounded very eager, explained everything was no problem and accepted the passports for processing. They will make a special effort after I already lost 4 weeks through the other agency.

After two months and dozens of assurances that everything was going well, I finally found myself 4 days before my departure without one of the agreed visas. As an explanation I got that it could not be explained. But I could consider myself lucky, because one shows good will and voluntarily renounces the wages of the own hard work. Whereby I could see from the returned documents that two of the three visas applied for were simply not submitted.

Since there is apparently a system behind such an obviously industry-related madness, I suspect that there are not a few black sheep in this business field, as usual, but only sheep.

My advice to all those who want to travel to more exotic areas: make sure you apply for the visas yourself – even if this means having to travel further distances to the consulates several times. 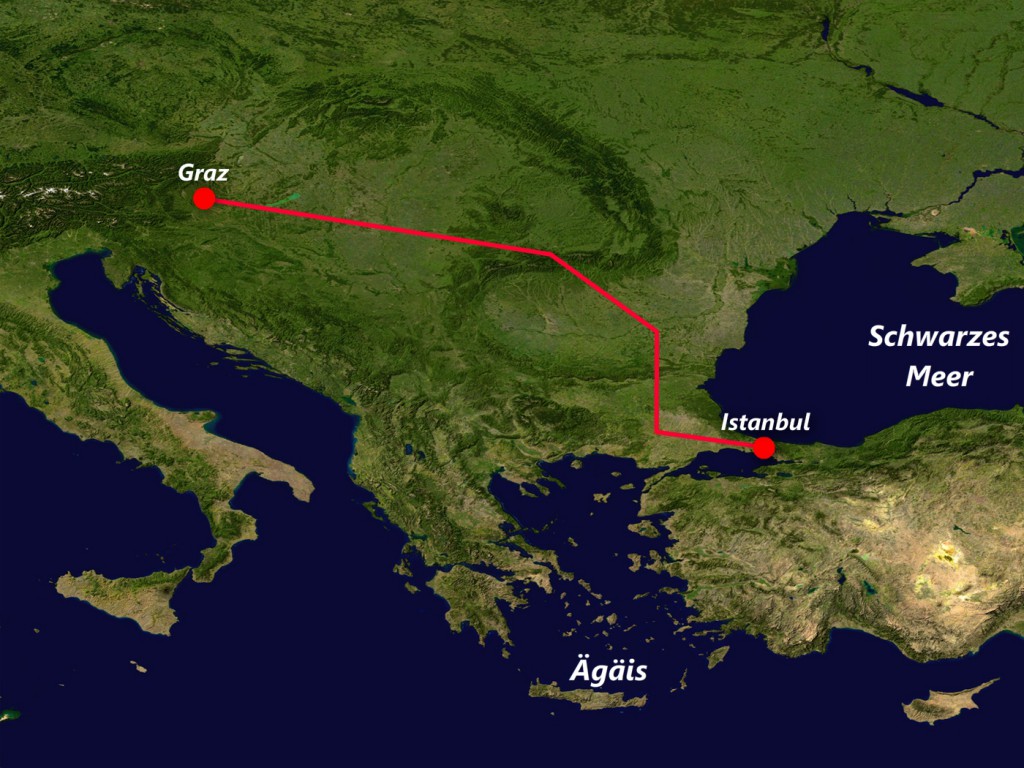 Improvisation is the order of the day – the new plan is now to start the journey to Azerbaijan via Turkey and Georgia and to organise the necessary visas for the onward journey to Turkmenistan and Uzbekistan in Istanbul, as there is no representation of Turkmenistan in either Georgia or Azerbaijan.
If a short visit to Yerevan / Armenia will be possible I will have to decide in Tbilisi / Georgia.

Since the issuing of a normal 30-day tourist visa for Turkmenistan takes at least 4-6 weeks, I have to try to get a 5-day transit visa, which should be ready within a week, just like the Uzbek tourist visa.
5 days of transit is little for a country like Turkmenistan with an estimated distance of 1300 km, especially considering that there can always be delays with the ferry from Baku. Should there be another one or two days delay, it will be tight. Apart from the fact that this country is absolutely worth seeing and I’ll probably somehow slip through, it’s also notorious for its lengthy, bakshish-intensive police checks with extensive waiting times.
The intended trip through the Karakum desert with its unique gas craters I can forget, the only remaining place for me is the Kizilkum desert in Uzbekistan.
At least most of the other originally intended sightseeing destinations are on the direct route between the Caspian Sea and the Uzbek border.

Fortunately, I had applied for the missing visa for Azerbaijan myself in Vienna some time before, as this embassy probably in wise foresight does not accept any intermediaries.

Due to an extended bad weather front, I started from Graz one day later than originally planned – on Tuesday, March 31st at 6:00 a.m. My way to Istanbul on the first day was via Murska Sobota in Slovenia, Szeged in Hungary to Sebes – just before Sibiu / Herrmannstadt – in Romania. 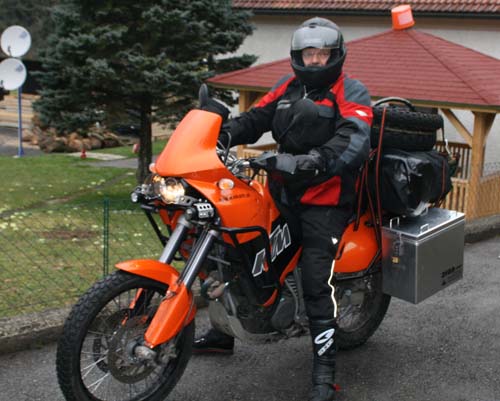 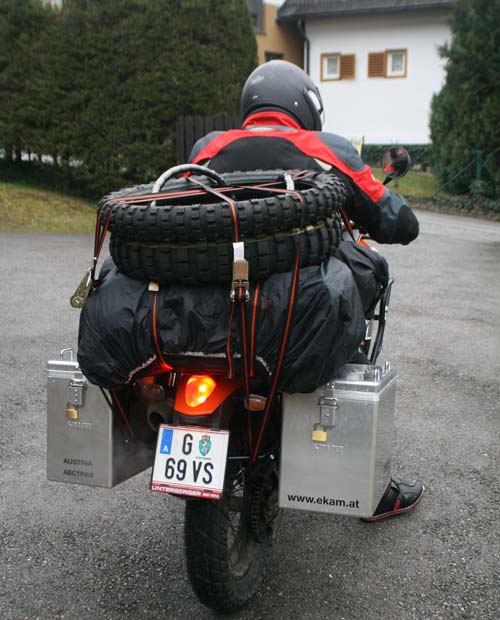 The decision to wait a day because of the bad weather was absolutely right, because at least for the first day I had dry road conditions. My route to Szeged was on side roads, which did not allow me to make fast progress but at least provided a pleasant driving experience without transit traffic. From Szeged on, one joins one of the north-south transit axes between Istanbul and Central Europe, a circumstance that is directly noticeable by a high volume of heavy and slow traffic. From here on it became much more difficult. After 800 km and 13 h on the bike, the first day was over in Sebes / Romania.

On the next two days it rained almost continuously, the cruising speed had to be adjusted accordingly, the ride turned out to be a mental hurdle race due to the flood of trucks in the rain. Nevertheless it went on slowly but steadily until I broke the first of my lashing straps shortly before Bucharest.
It was one of those commercial ones with a ratchet as tensioning device and a nominal maximum load of 500 kg. You would think that such straps should normally be sufficient for a total of 40 kg of luggage consisting of rucksack, luggage roll and spare tyre, especially since I used 4 of them.
The rest of the belt had to be removed between the rear sprocket and the spokes in painstaking detail work, fortunately at the next gas station an equivalent replacement was quickly found. By the way, the new one stopped exactly 2 km before this one also broke and I got tangled up in the rear wheel again. Next gas station, next belt – this time a stronger one with a load capacity up to 2 tons. But this had to be enough, I thought.
The roads around Bucharest are in an extremely bad condition. Due to the heavy traffic, potholes and up to 30cm deep grooves are lined up seamlessly – not a special challenge for a KTM Enduro, but it inevitably leads to bumpy roads and constant shaking. It must have torn somewhere here, the third of my belts – unfortunately unnoticed this time.

When I arrived an hour later at the Bulgarian border crossing at Rusa, one of the customs officers pointed out to me that it was dripping out of my luggage. I don’t remember exactly how I got the stupid idea to put a 4l canister of motor oil in my backpack to my trekking equipment. I didn’t want to put too much weight on the side panniers, but I surely could have found a better place for it.
Anyway, this time the loading had slipped – unfortunately directly over the exhaust. 10 cm in diameter was the hole burned by the hot exhaust fumes into the rucksack, the oil canister and a considerable part of my hiking gear. Everything that did not melt was thoroughly spoiled by the oil. I was lucky, because even a lighter had melted down completely. If the oil-soaked luggage had started to burn during the trip, the trip would probably have ended at this point. 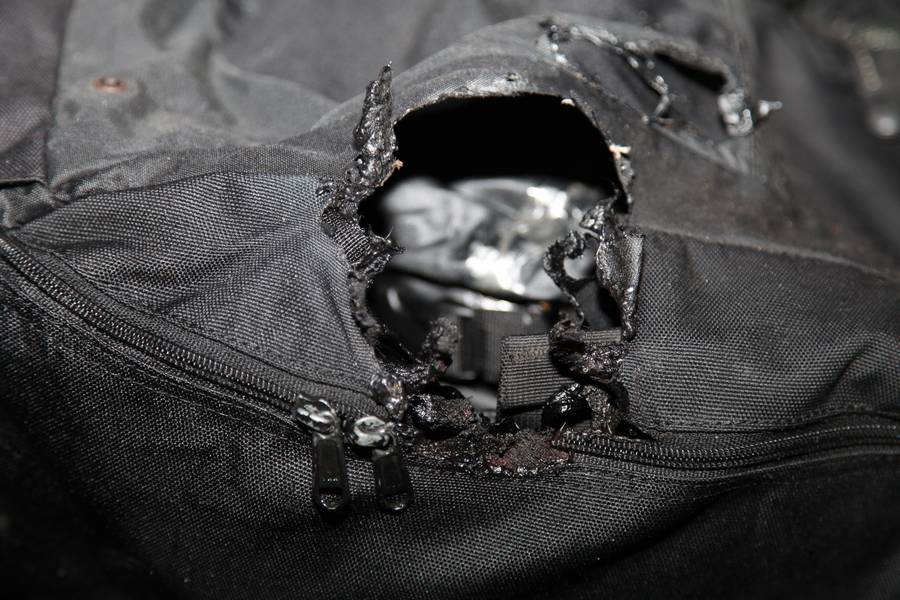 Still on the forecourt of the border station I had to sort out and throw away most of my equipment, only my hiking boots and rain jacket could be saved. I’m really sorry about my backpack, with which I had already hiked thousands of kilometres on my back through the Andes and Himalayas. I will have to put in one or two extended shopping tours in Istanbul.
Anyway, the sad daily routine of the customs officers was suddenly interrupted by me, the border crossing was partially paralyzed for 30 minutes. Every one of the officers who could do anything, watched and gave me, as far as I could understand, friendly tips and advice, brought paper tissues or asked questions while I had to throw away piece by piece.
Usually I am happy to receive such an active sympathy, in this special case such a crowd of onlookers rather leads to a rapid increase of the stress hormone level.

The worst mess, sir, continued with much lighter luggage to the next gas station and a new 2-ton belt. From now on the luggage was secured with the same intensity as with a wooden transport, which should now at least reach Istanbul.
The destination of the daily stage was finally Veliko Tarnovo, the former capital of Bulgaria. A very pretty, touristically fully developed place with a historical city centre and pleasant hotels – just the right thing after 600 km and 12 h in the rain.

The departure at 7 am the next morning didn’t work out, I didn’t leave until 10 am. The conditions at daybreak were too bad – heavy rain and fog did not allow it. The weekend was just around the corner, so the stage finish for this day still had to be Istanbul, if I didn’t want to lose too much time organising my visas. That meant biting through and back on the track.
The conditions got even worse on the way to Stara Zagora. Alternating torrential rain, freezing temperatures, sleet and fog kept the average speed below 30 km/h on the narrow mountain road. The already miserable vision was worsened by the tarnished glasses under the visor. 2 hours of extreme conditions, stopping every 10 minutes, cleaning the visor and glasses – already the first challenge although I was still at the beginning of the trip.

But even this state of emergency passed by again sometime. The roads became wider, the rain weaker and the temperatures increased noticeably when the wide plain from the Balkan Mountains opened up towards Turkey. Before Haskovo the rain finally stopped completely, from now on it was time to accelerate. The border into Turkey was crossed quickly and without problems, the last 250 km to the finish line only motorway.

The closer you get to the 20 million city of Istanbul, the denser the traffic becomes. In the metropolitan area of Istanbul it was then over – mile-long traffic jams on the partly 4-lane highway made a fast progress towards the end of the third day of arrival impossible.

The average income in Turkey is about one third compared to an Austrian income. Therefore, this traffic volume is even more surprising if one considers the petrol price of 1,50 € per litre. Even if people here on the Bosporus were to earn twice as much as the rest of the country, a large part of the monthly budget would have to be spent on fuel.

Anyway – after 3 days, 33 h driving time, 1950 km and 5 tank fillings without any serious difficulties, it was finally time in the early evening to look for a suitable hotel in the district Aksaray / Istanbul.