The trip by jeep from Yuksom to Darjeeling was faster than expected. Instead of the -forecasted 6 – 7 hours I had already arrived after 4 hours at the market place of the renowned tea city. A hotel was also quickly found and so I could do the most necessary things right away. 8 days in the mountains without a shower leaves traces, especially on the clothing. That’s why almost all the laundry – used or not – goes to the hotel’s own laundry, while I use the time to stroll through the Chowrasta district in an extended ramble and let the day come to a relaxed end. 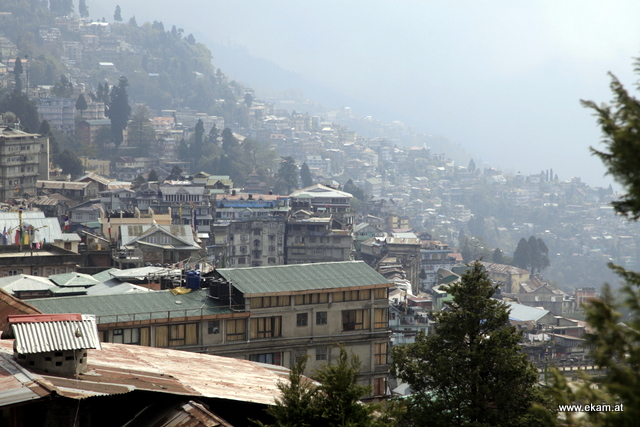 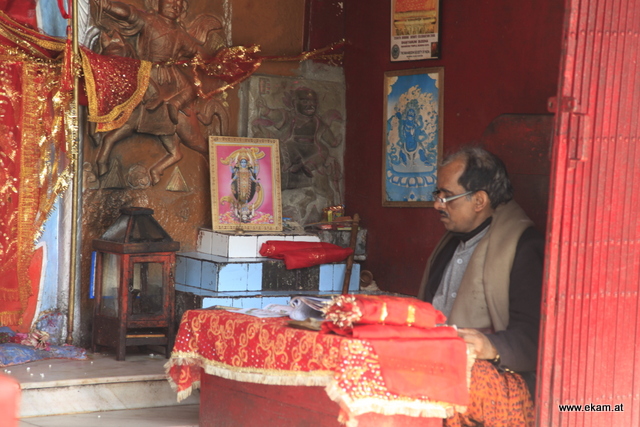 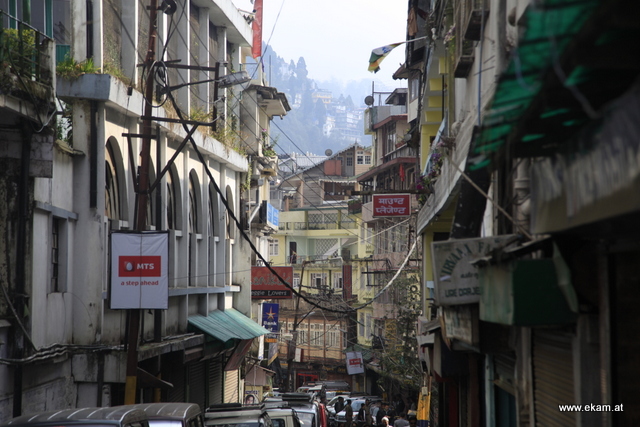 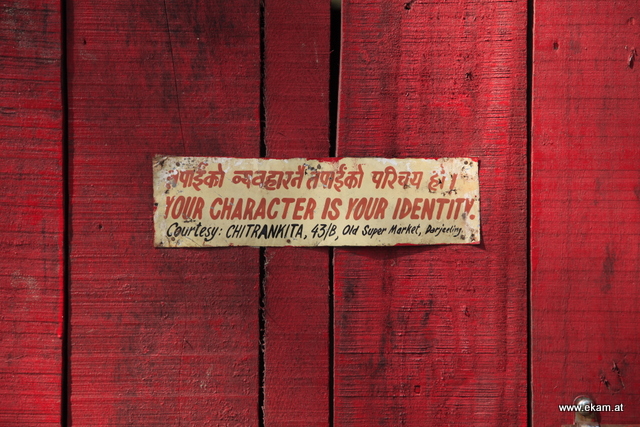 3:30 in the morning was day watch, the morning destination is Tiger Hill, that viewpoint 11km from Darjeeling, from which you have a panoramic view of Mount Everest, Makalu and Kandzchenjunga – maybe if you are lucky 3 or 4 times a year. Otherwise you have to be content with an impressive sunrise, like me this time and hundreds of others with me. Unfortunately not the sole owner of this great idea, everyone wanted to get up at the same time between 4h and 4:45am, which meant traffic jam – when driving down afterwards, including the incipient rush hour, logically a mega traffic jam. 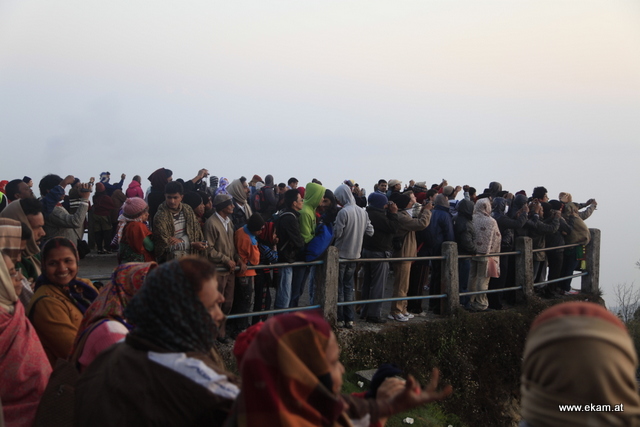 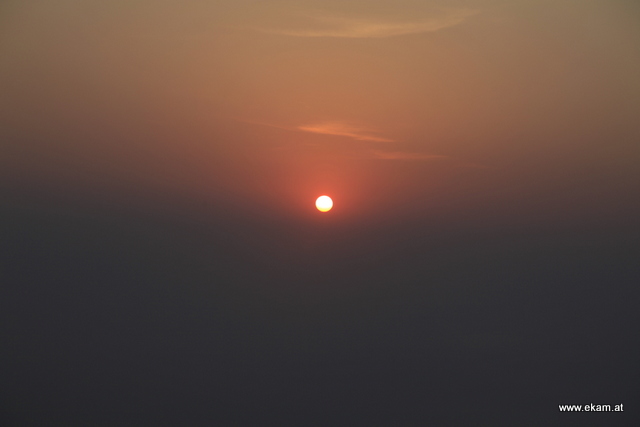 Darjeeling is a naturally grown, narrow, winding city with narrow streets and deep canyons of houses. Originally founded by the British in the middle of the 19th century as a health resort for English officers, the town planning at that time had probably reckoned with everything except today’s car traffic. Optically wide enough for two passing cyclists, a jeep and a truck must pass each other in the 21st century. There is no one-way system and even if there was one, nobody would follow it. So it can happen that for a distance of 500 m 45 minutes are needed. In these 45 minutes you will come about 4 times into the following situation: wall – jeep – truck – wall and between them 2 cm. So nothing goes more. The drivers get out after the vehicles have rolled towards each other in columns, the vehicles behind them of course also. First of all, the group of ten or fifteen drivers discuss the situation with donkey patience, after all, they are all experts in overcoming bottlenecks. In Europe, they would probably start to use more solid arguments from this point on at the latest. The wedged vehicles begin to move slowly back and forth, centimetre by centimetre, minute by minute more and more forwards, because unfortunately not much can be moved backwards – the others are already there. And that for 10 minutes, in between a scratch is not really tragic, because it is part of the daily business and serves the aerodynamics. Unbelievably, the two vehicles really squeeze past each other and then accelerate to full throttle, accelerate to a full 30 km/h, the columns in the back, because 100m further on the same game starts again from the front and then again and then again… 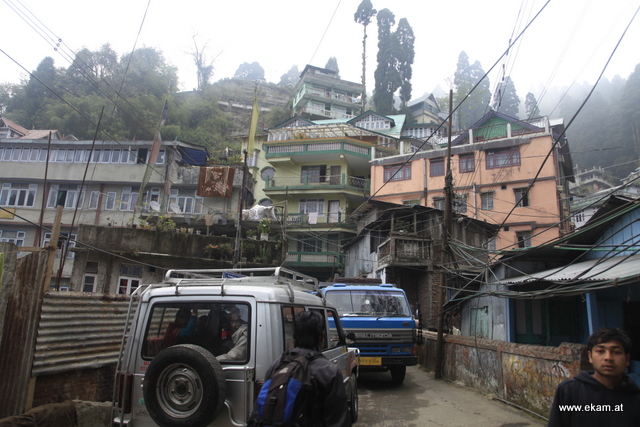 This is another way to spend your morning hours in Darjeeling. At 10 o’clock the laundry is dry, after the smell control there is no real improvement to be seen, but at least it looks cleaner. Packed the backpack quickly, today we will go to Karkavitta – the Nepalese border town from where the night bus goes to Kathmandu (KTM).

Unfortunately, just this morning a part of the Central Market of Darjeeling burned down. The fire brigade on duty and thousands of onlookers right in the middle of it all, right next to the shared jeep assembly point, make sure that no jeep leaves from there that day. I squeeze myself through the crowds with my backpack and hand luggage to find out “No jeep is leaving today. But no problem, sir, on the other side of the station the jeeps are leaving…”. The main road is closed because of the operation, so through the narrow maze of alleys between the market huts by thousands of people somehow to the other side, further to the station to finally be sent with the same answer to Clocktower and from there back to Central Market and from there… 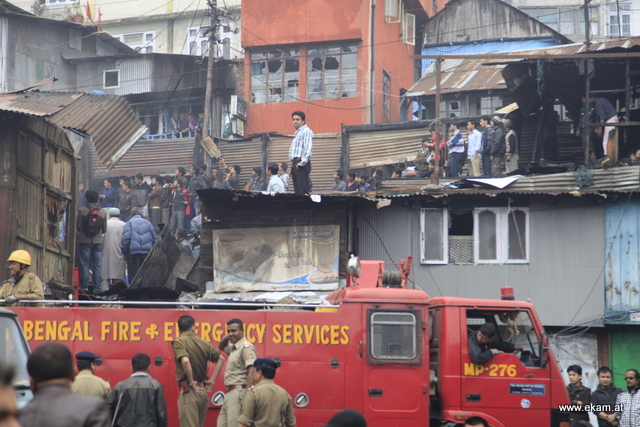 Two hours of circulation are enough, the luggage is heavy not only on the mountain but also in the city. Change of strategy. Sweaty, I sit down at the side of the road and stop every car that looks like a shared jeep and is only somehow going in the desired direction. After dozens of attempts the success sets in – a jeep stops, already fully occupied but this problem is solved relatively quickly by the driver. A young man from the fund of the vehicle is put on the roof to the luggage and I get his place in the fund, have the age bonus so to speak. An additional paying passenger is always welcome, everybody understands that here.

Passing the Indian border station we cross a long bridge in the direction of Nepal. The border officials in the check-in building are happy that I am coming as I do not have a visa. That means that one has to be approved and that costs – 3 months visa in return for a passport photo and 85 Euro, by the way, I get the change from the private wallet of an official. The suspicion is obvious that my money goes there as well. Normally I am very sensitive in such transactions and negotiate or demand a receipt, this works mostly to get a halfway fair price. But I really want to catch the night bus to Kathmandu, so I don’t care about that day – let him have a nice weekend with his family.

Punctually 5 minutes before 5 o’clock I am at the ticket counter at the bus station Karkavitta and wave with the money in my hand.
The best available ticket for the night bus to KTM, please Sorry, the last bus left already at 5 o’clock – today there is no ticket left. Why, it’s only 5 minutes to 5? To India time, sir, to Nepali time it’s already 10 minutes past 5.
I had completely forgotten the 15 minutes time difference between the two countries, unfortunately in this case to my disadvantage. At the side desk I get a ticket for the 1st day bus at 5 am the following morning and take the next hotel next to the bus station.

The traffic in Nepal is the same chaotic as in India – but with a huge difference. In India everything goes slower. I don’t think I ever exceeded the maximum speed of 50 km/h with the jeeps in India during these weeks. The roads are bad, the curves are narrow and everything runs more moderate. The Nepali, on the other hand, are hotter, and despite the same conditions they really put their foot down.
Therefore the terror was once gigantic at the beginning, when the bus driver accelerates with estimated 90 Km/h in the dawn out of the city. The road traffic in India and Nepal is a story of its own – after having been on the road with my own motorbike in these countries for months, I could deliver a 200 page detailed report at this point, but I would like to spare everyone involved.

After a short acclimatisation phase of 10 minutes, peace and serenity, quasi contempt of death, come back. For the next 15 hours until KTM. 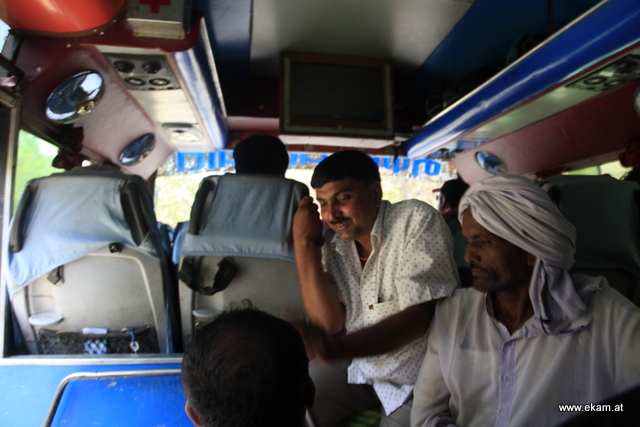 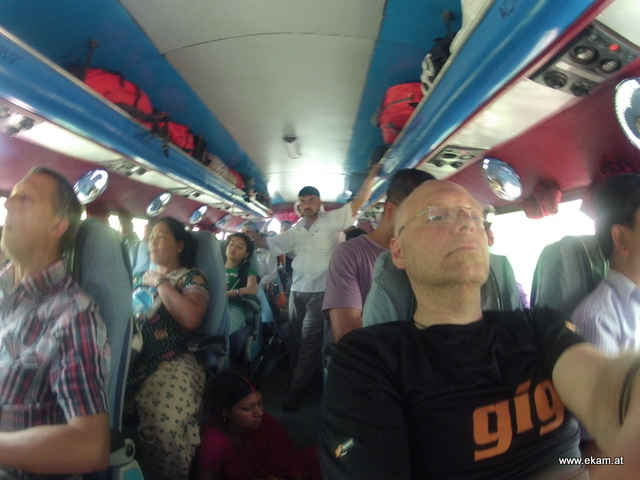 The trip to Kathmandu became necessary, because for the first trekking permits my passport in the original must be available. So from the Indian-Nepalese border in the east to KTM for a few official ways and then after 2-3 days the same route back again. Finally I start my first part of the trek shortly after the border. From Tapleijung in the direction of Kandzchenjunga Base Camp (KBC), to return to KTM on foot via Makalu Base Camp and Everest Base Camp, past Shishapagma in Tibet through the mountains. The meeting with the Nepalese representative of Worldwide Trekking – one of those companies that support me on my way both financially and organizationally – was very successful. Sudama obtained the necessary permits and documents for me. During the very intensive route discussion the last open questions could be clarified.

Change of plan. Because of his advice and my experiences with Goecha La I decided in this conversation, contrary to my first idea, not to do this tour alone. The luggage is simply too heavy and I would become much too slow. There was the danger that I would arrive too late in the monsoon and would get problems over snowy passes, or paths would become impassable due to mudflows.

Therefore he got me a reliable, English-speaking porter and local companion, who could take over a part of my luggage for the next 7 – 8 weeks. My one-man tent was exchanged for a two-man tent, a SIM card including mobile phone was organized, the equipment was checked properly, the missing things were bought and the luggage was divided into two.

The free time in between I use for extensive walks through the city. Kathmandu will get an own blog article from me, that much is for sure – but not now but when I’m back – too much has changed in the last 5 years since I was last here, which is worth describing. For the time being I just want to provide a few pictures 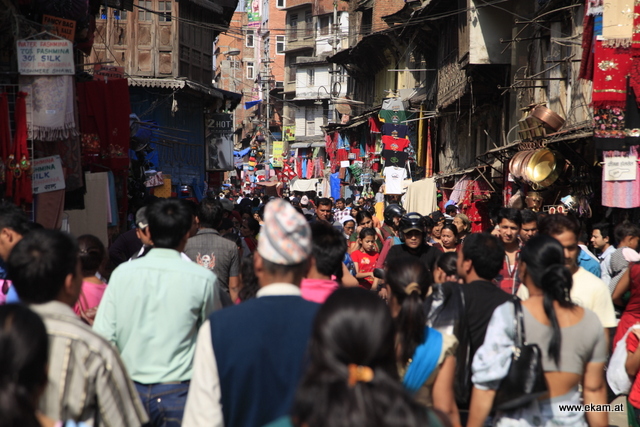 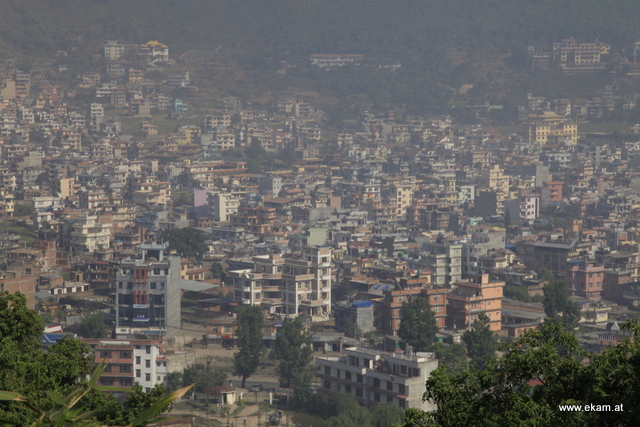 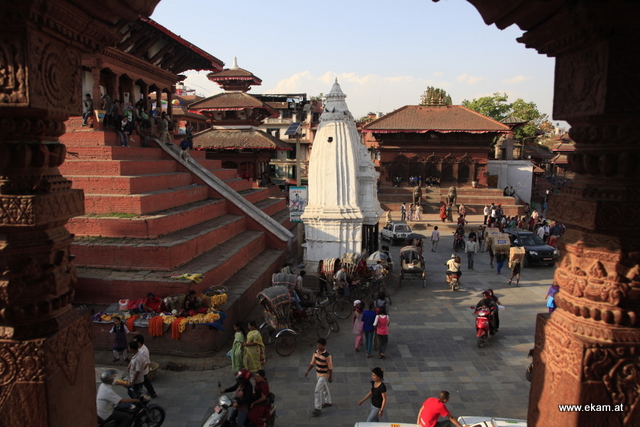 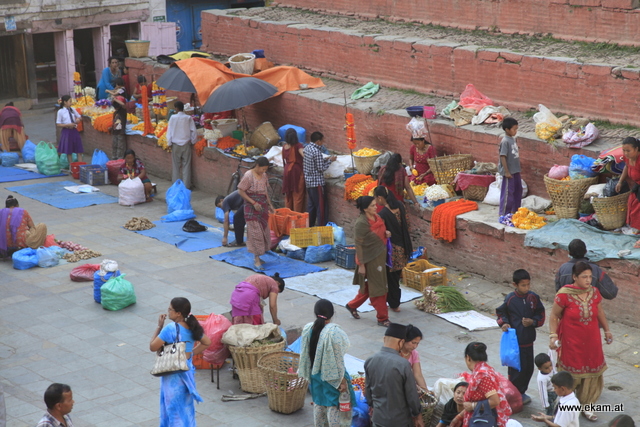 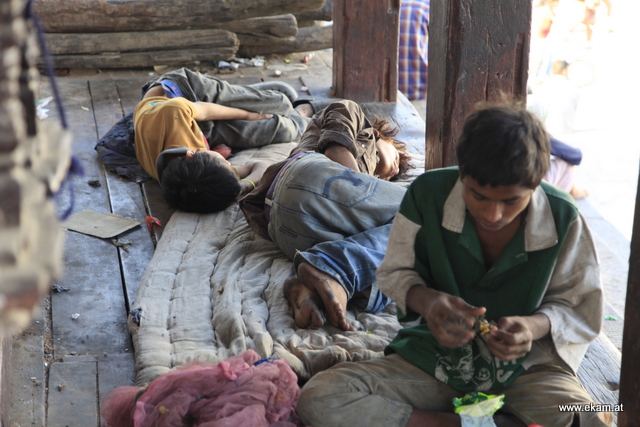 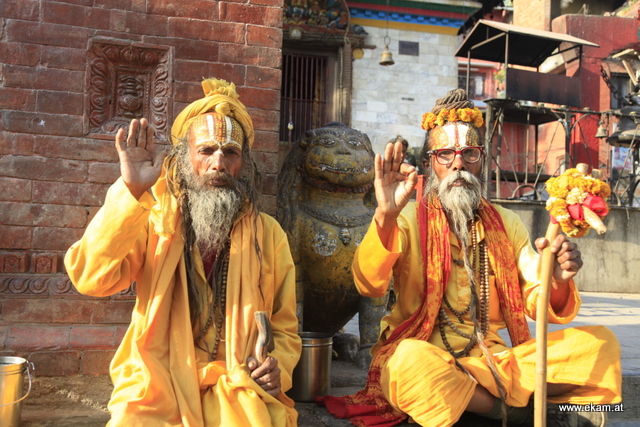 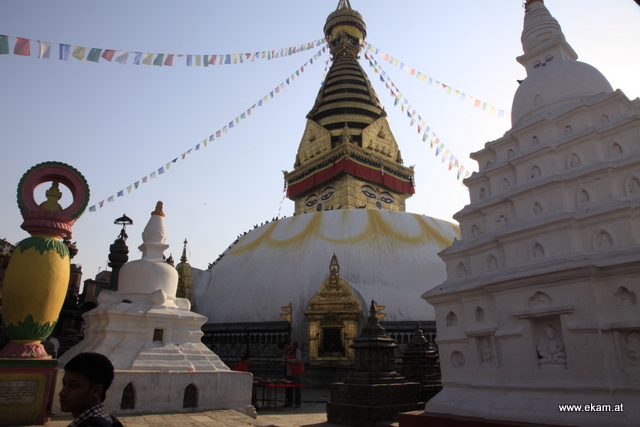 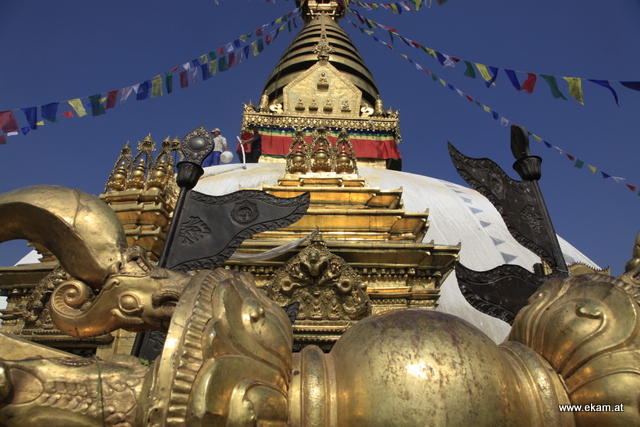 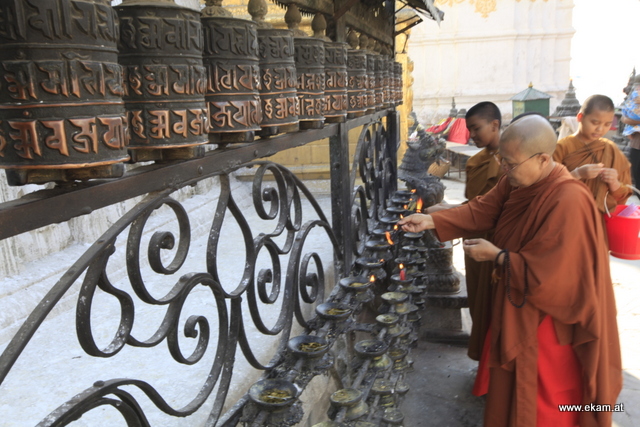 On 24.4. all permits are issued, which was a bit more difficult, as we will be travelling along the Chinese border away from the usual tourist standard treks. In former times these were old trade routes of the salt caravans between Tibet and India – today these paths and passes are often used for smuggling. Which is where the sensitivity of the entire first section of the route lies. 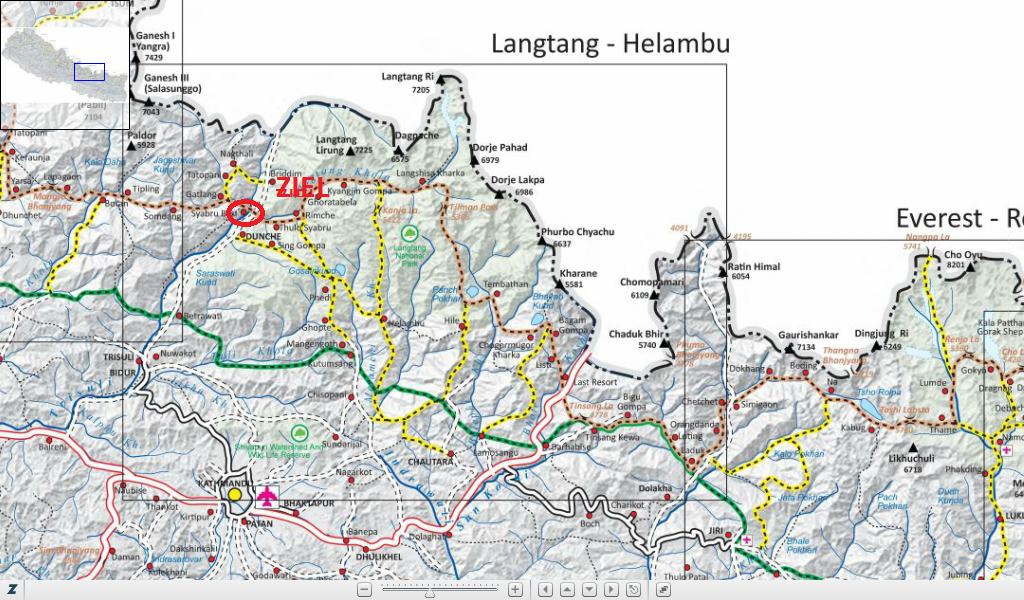 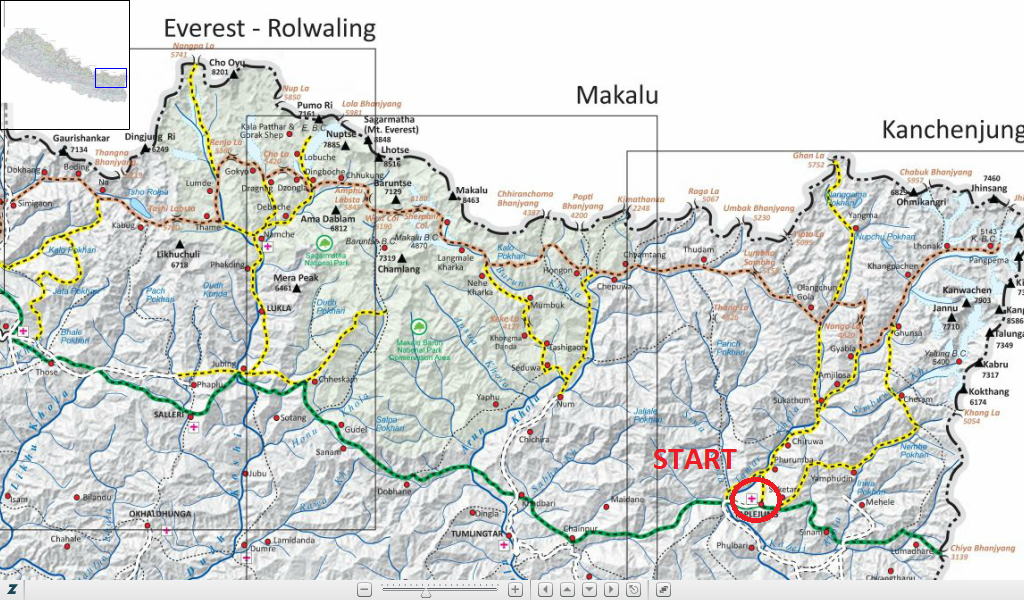 The night bus leaves in an hour, I want to reach it this time – have no idea when I can get in touch again. But I’ll take every opportunity.
-Henry