Finally, it’s starting. After 6 months of preparation and a long journey it’s really burning under the toenails. The anticipation of the march is huge and is not really spoiled by a slight uncertainty. If my rucksack is standing around somewhere in the way and I have to lift it up, my stomach still tingles. 35 kg dry are no honey lick – together with my little more than 95 kg 130 kg total weight will be rolling through the mountains in the near future. Sounds a lot like exertion.

During the partly very intensive physical preparation the biggest challenge was to build up this “fighting weight” and then to keep it. To start the trek with less weight would be negligent and in the end dangerous to your health, the probability of breaking off prematurely would increase. On the other hand, saving on luggage would be at the expense of safety or photo and film equipment. I would like to come home healthy and I would also like to have good pictures – so the idea of reducing the equipment is relatively easy to realize. Despite several attempts to revise the packing list, I did not succeed in saving much weight.

During my last trekking in the Himalayas my weight loss was about 6 to 7 kg per month – so in 3 months about 20 kg. The premature end of the trip and a free flight home with the medical flight ambulance was the result. On average 50h per week up and down the mountains, additionally not enough to eat due to the altitude and the resulting decrease of the feeling of hunger – that’s when they started to tumble, the kilos. One of many challenges on this trek will be to reduce this weight loss at least by half, i.e. it must not be more than 3 – 4 kg per month this time.

Sikkim is ideal for acclimatization, it serves as a warm-up, as it were, for getting used to the trek in a manageable and safe framework. Here you can hardly get lost. Sikkim, the second smallest state of India – situated between Bhutan and Nepal – is pure Himalaya, the landscape and the people are a perfect image of what I can expect in the next months. This mixture of different ethnic groups, languages, religions, cultures and mentalities gets used to the people of the Himalayas as well as the high altitude hike to Goecha La with almost 4900m above sea level to the coming rough and lonely weeks in the mountains of Nepal. 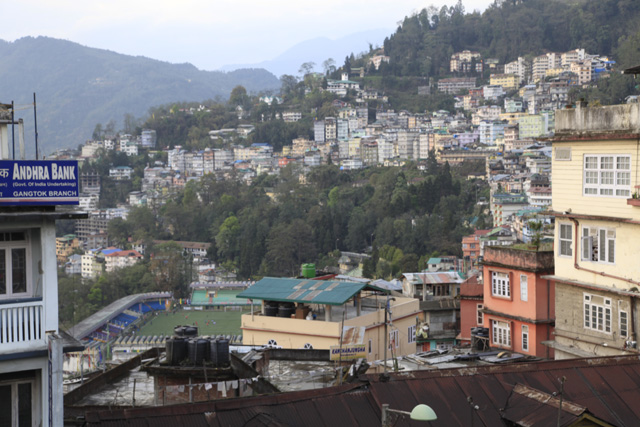 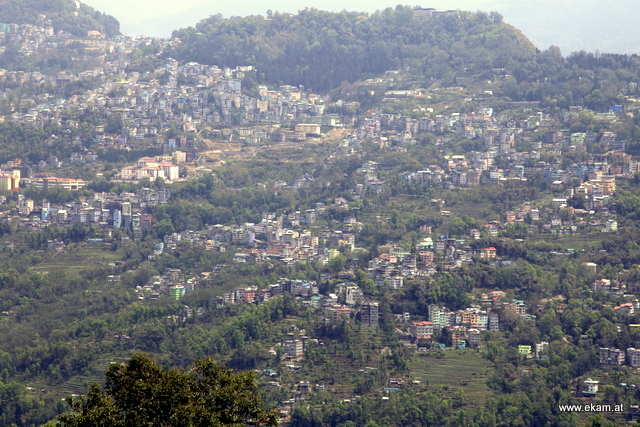 So the idea is to first walk 120 km through the mountains from Gangtok in the east of Sikkim to Yuksom in the west, and from there climb to an advanced lookout point at the foot of Kandzchenjunga, the third highest mountain in the world at 8,586 m above sea level and also the easternmost 8,000 m peak. 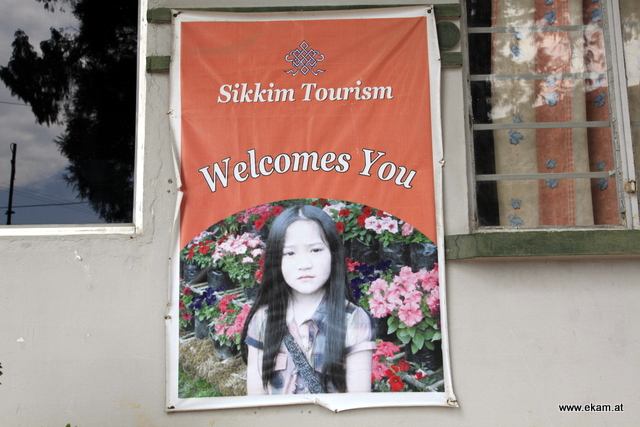 Every year, mountain enthusiasts from all over the world travel long distances to hike through the Himalayas for days, weeks or even months for sporting and cultural reasons or just to get some rest.
The locals, who live here in the mountains and struggle up and down every day, cannot find anything pleasant about voluntarily taking on such exertions.

This is probably the reason why the eyes of the young lady at the Gangtok state tourism office were huge and full of astonishment when she heard that I wanted to walk from Gangtok to Yuksom and would like to get some information from her. On an official trekking overview of Sikkim in the internet this route was marked and if anyone can give more information about it, it was her.

Why to go on foot? There are cars in Sikkim.
The answer was logical – and I have no idea how I would react to the question of an Indian in Austria, who wants me to explain the footpath from Graz to Vienna. Obviously she did not have such a request yet and after it was clarified that it is my free will and not for reasons of cost (with about 4€ fare in a shared taxi it was not that difficult) I got the information after some inquiries from her, it is not possible, these ways do not exist anymore. They were replaced by roads, blocked or to arable land. No chance to go off the road from Gangtok to Yuksom.

I always had a certain learning disability, especially with things that went against the grain. So the next morning I took a taxi and drove outside the city to Rumtek, visited the monastery and then just walked around. The old way passed here, Rumtek is high above the main street with a famous Buddhist Gompa. If it is possible to walk to the next station towards Ravangla, then from here. 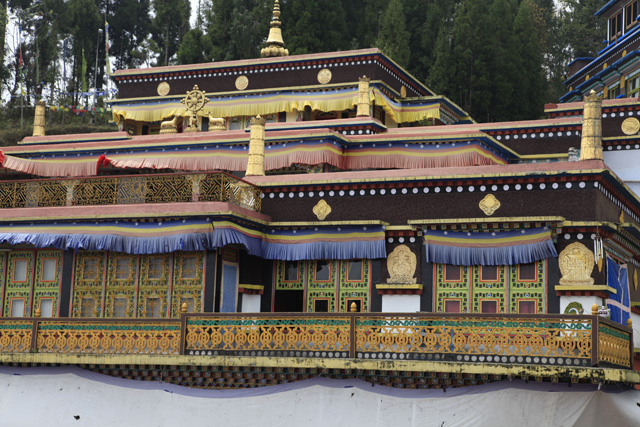 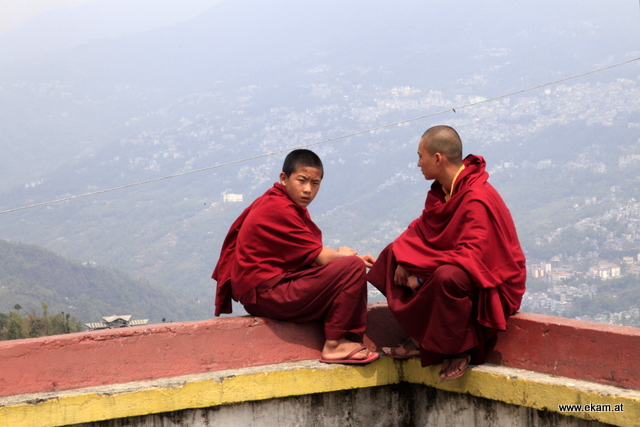 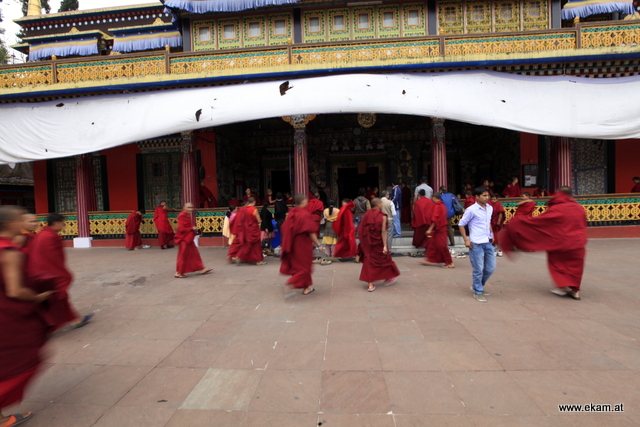 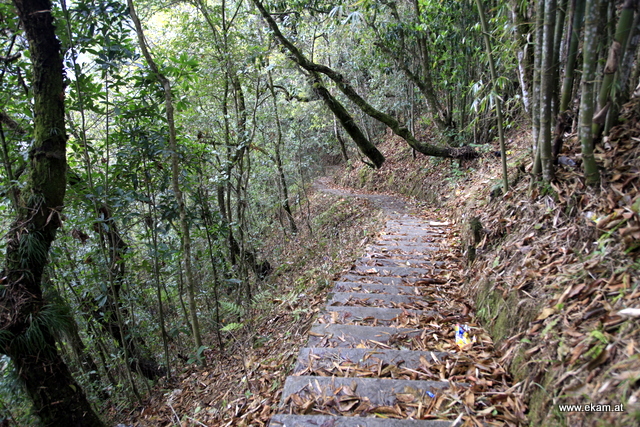 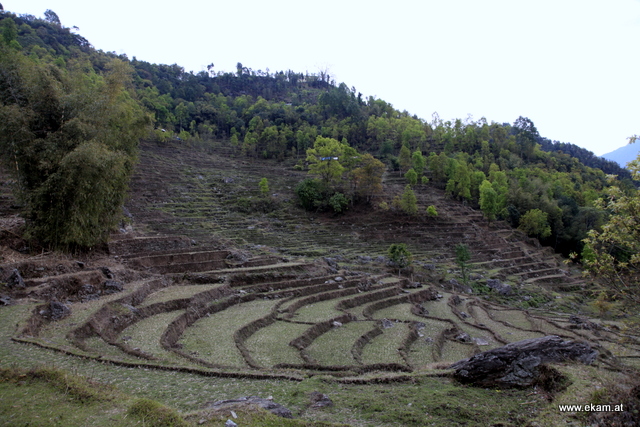 The attempt to find the next short cut up the mountain (to Ravangla) from the valley (Singtam) the next morning failed – but I got several times a tired smile and “No Short-Cut, you have to take a Taxi, Sir” to the answer. 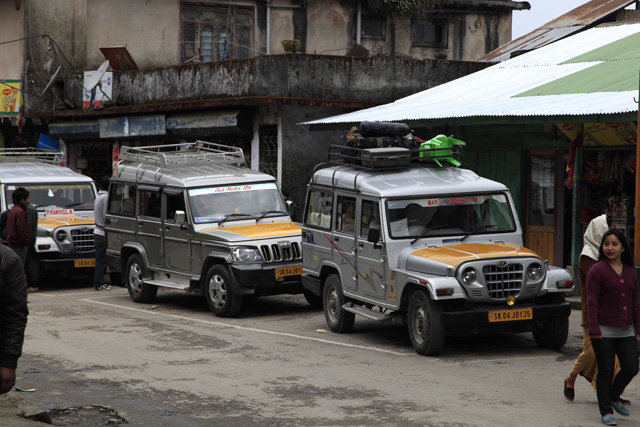 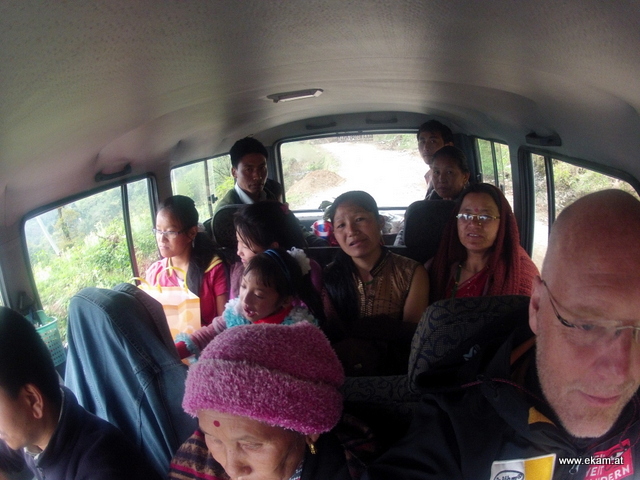 Change of plans. As a victim of progress I bow to the facts and decide to continue my journey to Yuksom by shared taxis (jeeps). I’m not so unhappy about this, because since my arrival in Gangtok it had been raining for several hours every day until now. So the first few days are used for cultural purposes, because there are enough monasteries worth seeing. Besides, driving in crowded jeeps on bad and narrow roads through the mountains can be very exciting and therefore have their charm. 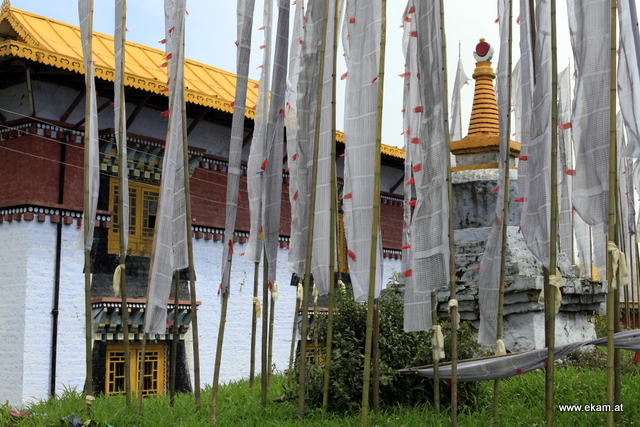 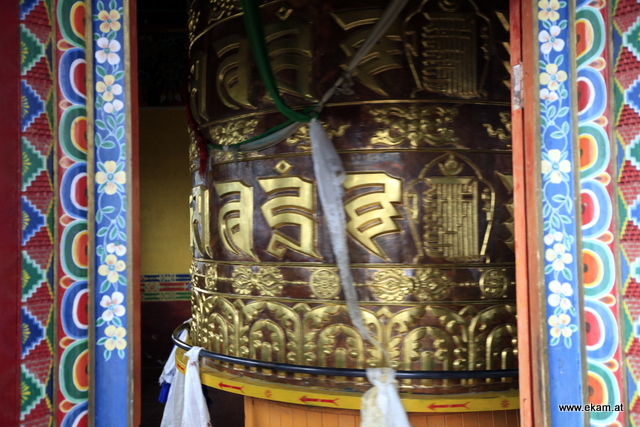 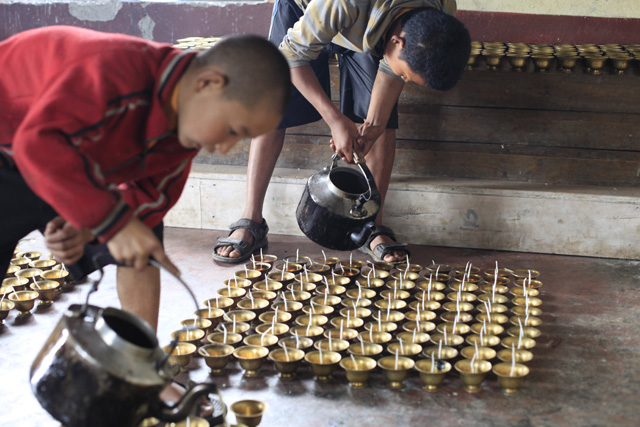 2 days later, after 5 changes and a stopover in Pelling, we finally arrived in Yuksom and had to organize the ascent to Goecha La as soon as possible. The Kandchenjunga and the mountains around it are located in the national park of the same name, unfortunately it is not allowed to climb there without a permit – and this in turn you don’t get without an agency and a guided tour. From the degree of difficulty it would not be necessary. But it is understandable, because the people here in this region have nothing else to sell but their mountain.

While waiting for my trek, I met a group of four young backpackers who had tried to climb the mountain on their own without a guide and permission. They did not get far – already in the first settlement (Baktim) the locals refused them food 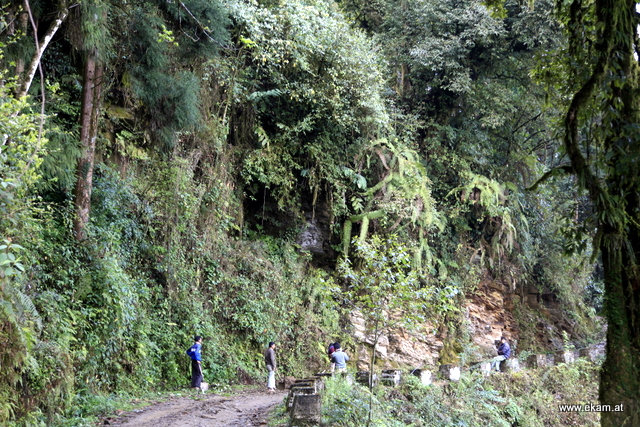 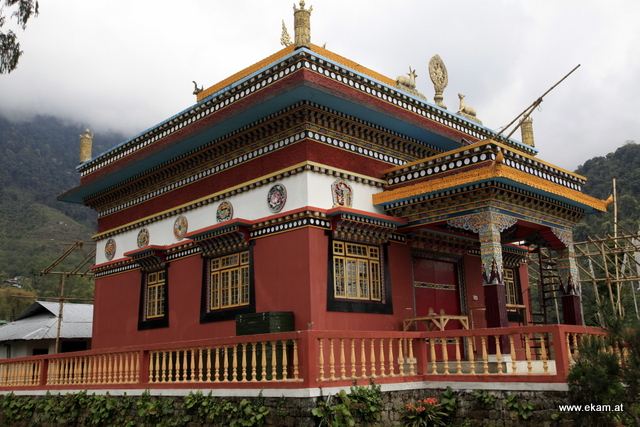 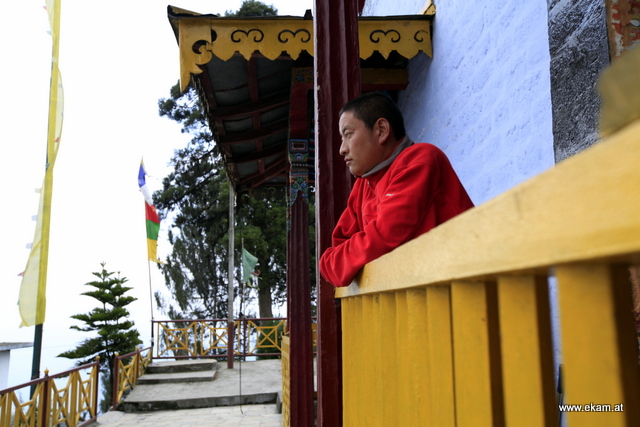 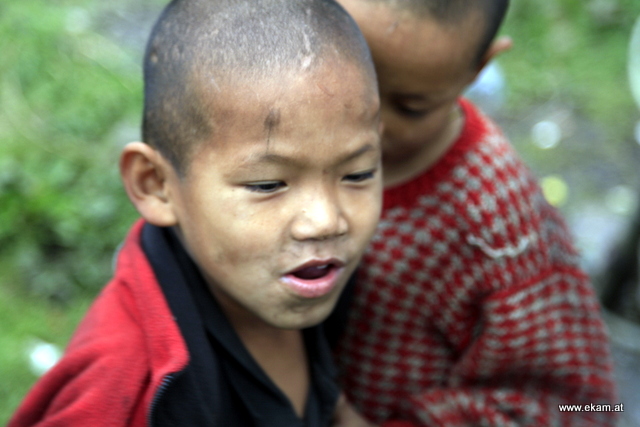 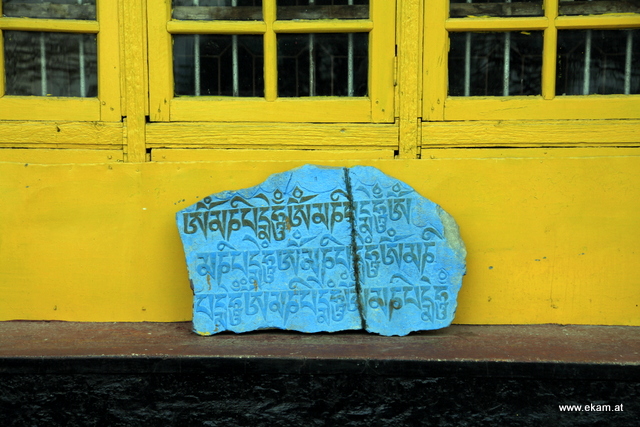 A suitable tour has been found, the provider seems to be reasonable and reliable – but as usual in India, time is not a linear sequence of days, hours or minutes with the possibility to make fixed appointments, but time only takes place when the event actually happens – in case of my trek 24 h later than agreed. Despite the continuing daily rain, the waiting time for the departure can be shortened by short trips to viewpoints and monasteries and – when the time comes – tomorrow morning we will start up this valley towards Kandchenjunga. 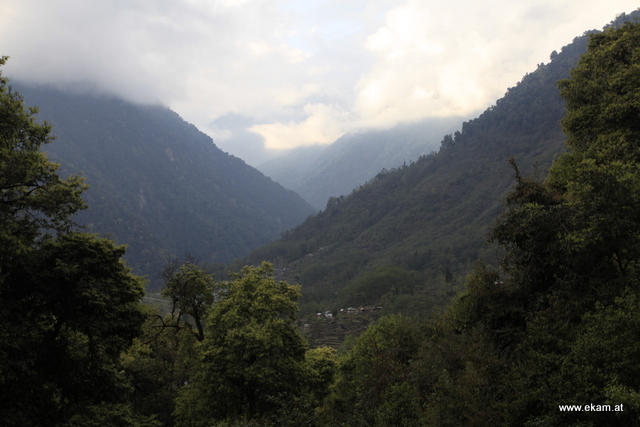