Islamabad, the capital of Pakistan, is a faceless hick town without a naturally grown city centre. Founded in the 1960s as an administrative centre on a greenfield site, it is mainly diplomatic offices, castles of civil servants and branches of international corporations, along the drawing board of planned three- or four-lane streets. The people live in housing estates in their single-family houses or apartment blocks, also surrounded by walls, barbed wire and guarded by private security services. The streets are overcrowded with vehicles, but otherwise deserted with the exception of security officers and private guards – everyone drives his own car if at all possible. The usual hustle and bustle in the narrow alleys of South Asian cities is as hard to find as buses or shared taxis, which are avoided by anyone who can afford them. The unadorned cityscape is perfectly rounded off by shopping malls as we know them from Europe and the USA – shopping malls where you can get local junk as well as the international goods of western fashion, electronics and food stores, in between a few restaurants and coffee houses to supply the country’s wealthy elite with sufficient consumer goods and fast food. These commercial bunkers form the actual, distributed centres of the city – they are the only markets where you can feel something of life, where you can meet at least some people in the cafes, on the streets and squares in front of the shops. But the really special thing about this place is – it was the first town that had nothing worth seeing at all, a lake where the locals met and looked at the water, that’s it. So in terms of sightseeing a virgin, dark spot without any historical background, completely freed from any tourist attraction. 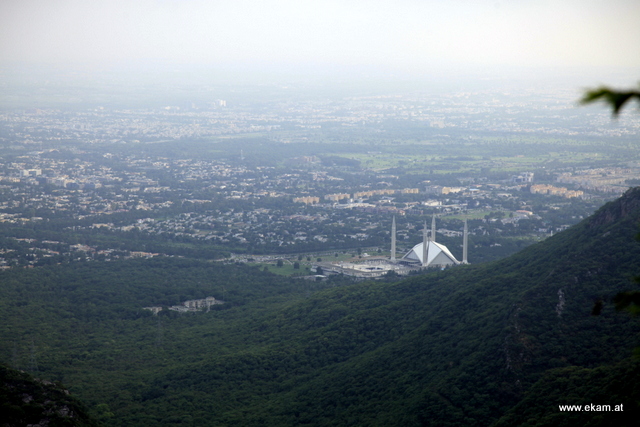 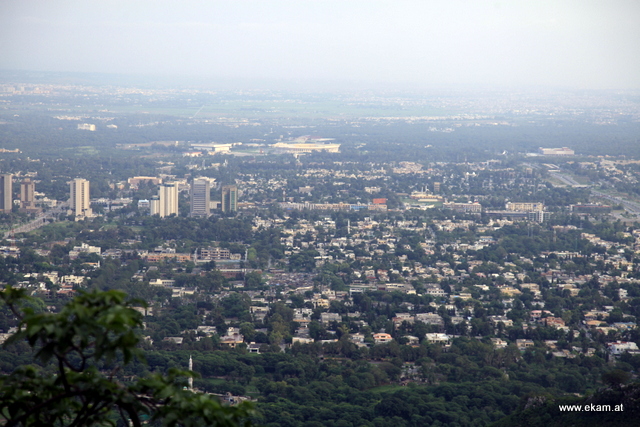 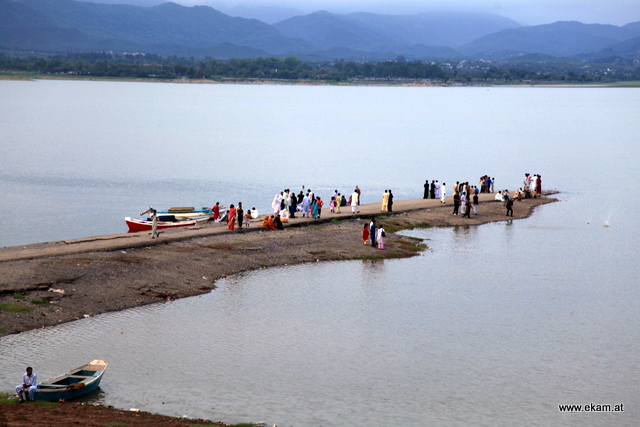 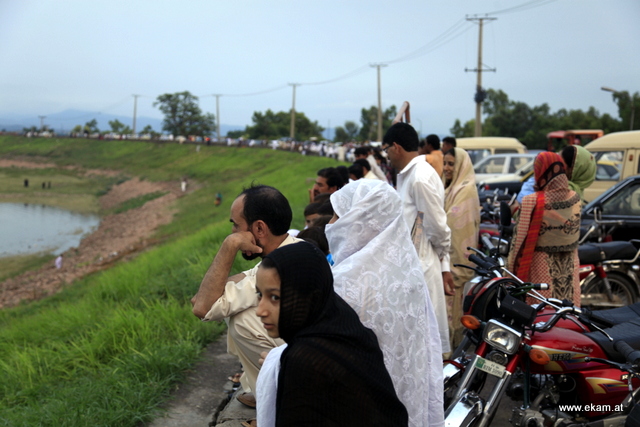 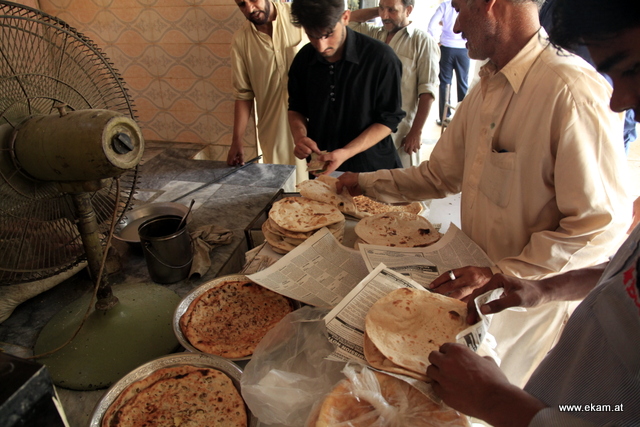 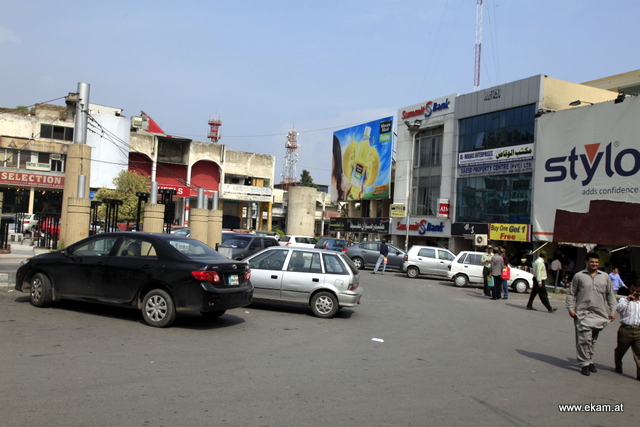 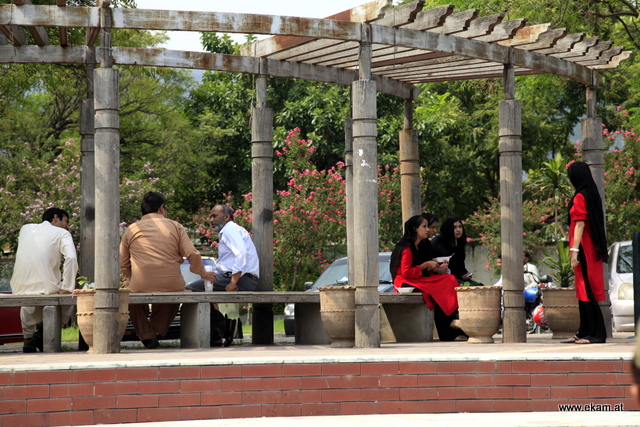 Sitting like a big, fat bird in a golden cage that’s too small is annoying for ten days. That’s how long it had taken me to get my Indian visa for the return journey to Kathmandu in my hands. Although I had applied for it right after my arrival in Pakistan, the Ramadan and the following holidays oath (comparable to our Christmas) caused unnecessary delays. Had I been able to spend my time in the mountains as I had wished, everything would have been no problem, because with the planned return from the north my travel permit would have been ready for collection. But so the only reason that kept me in Pakistan was the missing visa for the transit to India.

Internet and books in an air-conditioned room cannot replace mountains and nature in the open air – that’s why I had come to Pakistan in the first place. The anger and resentment about all these senselessly violent idiots who stole my circumnavigation of Nanga Parbat, who ruined my personal claim to quality travel, grew with every day of waiting. I had expected quite a bit – but not that the challenge in the mountains would end after only three days. No idea if this nonsense with terror and indiscriminate killing in this region will ever end and if I will get another chance to complete the planned tour, to hike undisturbed over the passes to the Diamir and Herrligkoffer base camps. Travelling thousands of kilometres in buses to this region under great strain, only to run away again without having achieved anything, was as frustrating as the sight of the suffering of innocent people and the concern for one’s own safety. Even the special order of my boss (-> my friend Bine) to do body care of a special kind, namely to use the time and to feed daily until the waistband burst, did not really help to lift the mood.

But despite these unpleasant aspects of my stay in Pakistan, I was once again one of the lucky ones, the privileged ones who can escape the whole thing. In contrast to the peace-loving majority of Pakistan’s population, I can leave the country and slowly forget about the madness. The people who live here can feel really sorry for you. They are torn between the fundamental teachings of Muslim mullahs and the western values of a globalized consumer society. Rural religious tradition meets the youthful freedom of the metropolises, illiteracy and poverty meets high education and relative wealth. People with medieval values live next door to those who have already arrived in the 21st century. A deep rift runs through society, which, together with arbitrary violence and state repression, leads to the unhealthy, well-known consequences of constant stress. Trauma, desperation, aggression and excessive drug use affect the broad masses who are unable to escape this towuwabohu. In retrospect this also explains why people in the mountains and on the way back to Islamabad looked so serious – because they simply have nothing to laugh about…

My conclusion after almost three weeks of personal state of emergency – unfortunately nothing has come of the circumnavigation of my emotional favourite among all the 8000s, Nanga Parbat. Instead of walking through the mountains, sitting around in a hotel, wasting time unnecessarily, is not my thing. At least the pictures of the weather satellites, which showed a continuous, fat cloud over the Nepalese Himalayas during the whole stay, brought some relief – at least this did not delay the further tour unnecessarily. That violence is not a solution for the permanent solution of problems, obviously only the peace loving people know – violent underprivileged people do not die out, this is not likely to change in the near future, at least not in this part of the world. Hundreds of people die every year in Pakistan due to attacks and military attacks – soberly considered, the probability of dying in a normal car accident is much higher, but still many times higher. Nevertheless, the knowledge of the potential danger alone changes one’s own behaviour and personality to an extent that I would not have thought possible before. A new experience, dearly bought and absolutely dispensable.
All in all – Pakistan and I did not become close friends, at least not during this stay – maybe with the next one, if there is one. Insallah – God’s will..

Himalaya Trek 2012 – Nothing to laugh about in Pakistan 1

Himalaya Trek 2012 – Nothing to laugh about in Pakistan 1