India, the largest democracy in the world with its hundreds of ethnicities, languages and gods belongs administred – accurately, cumbersomely and slowly. Here in the land of the salt offices, in the north, in the mountains on the border to Tibet, you need a permit for everything. Usually two authorities are responsible for this, either the district administration or the forestry administration and usually the I.T.B.P.F – the Indo Tibetean Border Police Force. This is a kind of military border guard, which is responsible for securing the 3844 km long border to Tibet/China. In contrast to Nepal, the Indians in the area close to the border with Tibet are not fun, they show zero tolerance when it comes to staying off the officially approved routes. One could get the impression that the two countries are at least emotionally at war – in terms of real politics, there has been enough stress for decades because of the unresolved border in Arunachal Pradesh (East India), but also in terms of power and economic policy, the two most populous countries on earth are fighting for supremacy and influence in the South Asian region. This even goes so far that it is forbidden to own detailed maps, which is why it is not possible to find any in India.

When so much big politics is involved, this can of course only have negative effects on the trekking needs of little Heinzi. In plain language this meant that almost my entire planned route in Uttarakhand was not approved. To the question what could be done, the official answer is: “Go to Dehli to he ministry”. Asked at trekking agencies one gets the information that one can save this work because firstly it takes a very long time and secondly only groups with Indian participation get the permission.

So for the time being the only fragments of my tour from Munsiyari were the way up to Nanda Devi (the highest mountain within India) Base Camp and to Milam Glacier, in order to get at least a bit into the Gharwal Himal. This is a normal, touristy, frequently used trek, which is challenging and well developed, but you should bring your own food and drink.

But also for this you need a permit in 3 copies, applied for at the district administration in Munsiyari and approved by the I.T.B.P.F. A completed form (only available in Hindi), a freely written application in which you describe what you want to do and a notarized affidavit that you will do exactly what you have applied for and at your own risk. 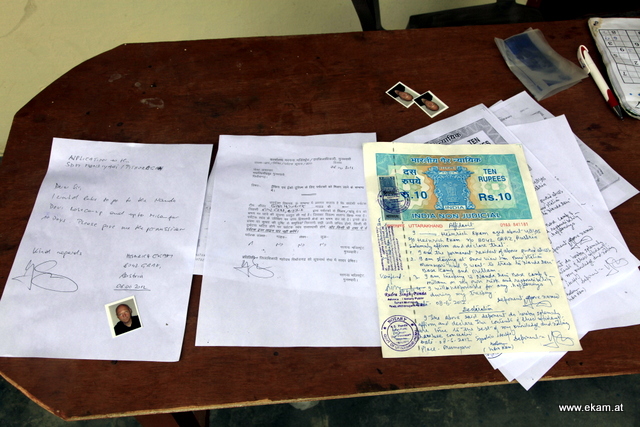 The Munsiyari district administration is located in a fenced-off area in the middle of the village, accommodated in smaller, individually scattered bungalows. Just for my first attempt to get this permit, I had to take a giant step forward in my personal development. Patience and calmness are normally not among my strengths, the concentrated civil service of Munsiyari teaches them free of charge in the form of a crash course.

The room in the form bungalow was darkened, the desk unoccupied. But by breathing loudly and regularly you could hear that someone had to be in it. In one of the back corners one could see the form official sleeping on a wooden bench in the semi-darkness, my entry did not disturb him in the slightest. The first call from my side was answered with incomprehensible Hindi mumbling, the second also – but supported by some clear hand movements, which signalled to me to disappear. At the third shout he sat up drowsy, shuffled past me with half-closed eyes without looking at me into the open air, took a seat on a stone wall and slept on sitting.

Ok, some things you just have to accept as they are – so on to the next bungalow. There the officials are already sitting on the stone wall in front of the building and drinking tea. Nobody could answer my question about form and permission because on the one hand nobody speaks English and on the other hand obviously nobody was responsible for it.

A look back to the first building revealed that obviously life had come into the dormouse. In the meantime a cow had appeared on the premises and had caught his attention – holy or not, they apparently have no business on the premises – the cow runs behind the house and the sleepyhead stumbles behind with loud screaming.

My question about the 1st officer, the boss of this stronghold was smiled at and denied – he doesn’t exist here at the moment, nor does any vice president, he is on his way.

Man and cow were in the meantime on the 3rd round around the house – he shouts them mooing. With the speed of the two I was no longer sure who was after whom – man after cow or cow after man…

I tried to explain that I have been sitting in different busses for 40 hours now to get to Munsiyari and the next day I urgently want to leave for Nanda Devi – so I urgently need to get this sh… need permission. Besides I would not leave here before I had this permit in my hands. All right and no problem, only within the next 3 days there would be no permit for sure. Why I unfortunately could not understand

The two endurance runners were about on the 5th lap when they disappeared behind the house and then didn’t show up again. One could only guess what had happened, maybe they had agreed on a glass of milk directly from the petrol pump.

I was told by the assembled group of officials that I should sit down, have a glass of tea and wait. Wait for what? Nobody could actually explain, but the important thing was to sit, drink tea and wait. Further interjections on my part were skilfully ignored.

Such long bus rides are exhausting, my nerves were weak, so I gave w.o. for now and left without form and permission. On the way back, my form official was already sitting on his stone wall again and dozing, the cow had disappeared. Such a cow hunt was finally exhausting, from it he had to recover afterwards only once.

Back at the hotel I could persuade the owner of the house to organize this permit for me. With his support I managed to get the necessary papers with all the required stamps within 2 hours.

The first two days towards the Milam glacier were extremely exhausting. It was hot and for the first time I was alone with full luggage and food for 6 days. About 40 kg on my back – although I was very well used to 30 kg of weight from the time in Nepal in the meantime, the extra load at the beginning of the tour was a big challenge. The route towards Garwahl Himal up to the glacier is not particularly difficult – steadily uphill through narrow wooded valleys, which widen with increasing altitude and thus gradually open up the view of the snow-covered mountains. Especially now in June you are accompanied on the ascent to the glacier by countless herds of sheep and goats, which are driven up into the higher valleys during the summer months. 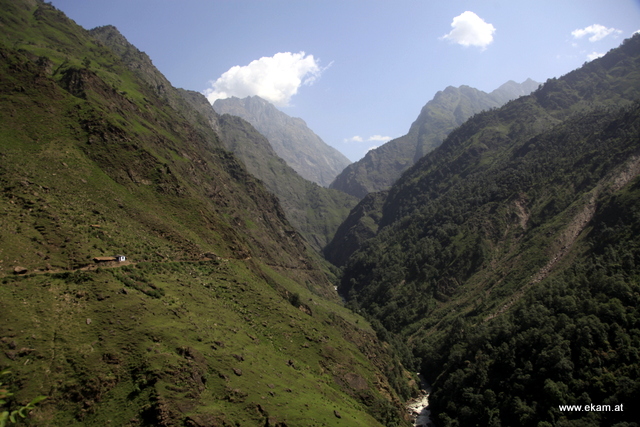 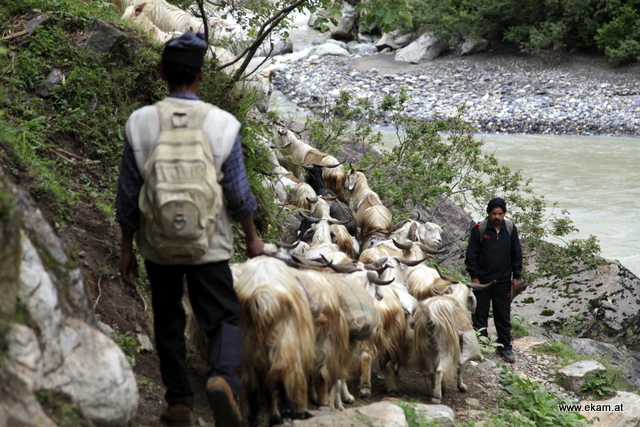 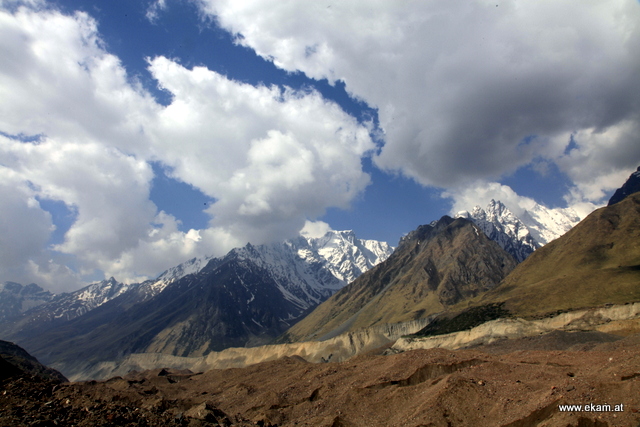 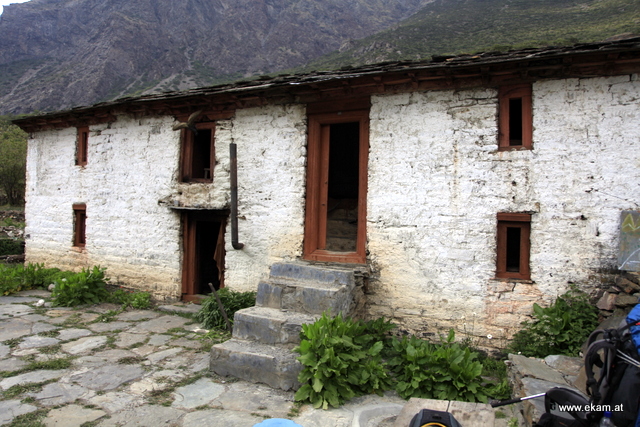 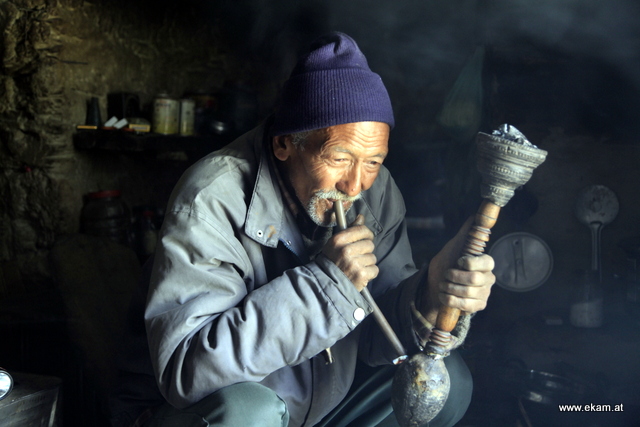 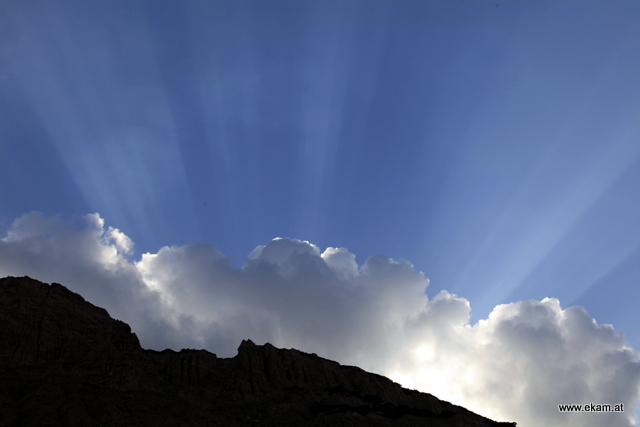 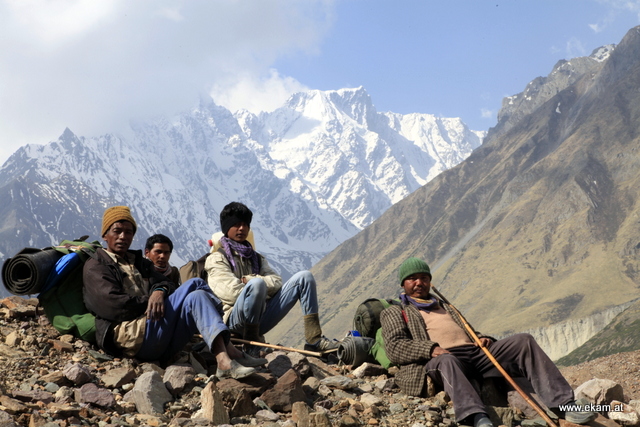 On the way from the Milam glacier to Nanda Devi Base Camp I wanted to save myself a detour of about 15 km by crossing a very questionable bridge. Due to her condition I was not sure if she would be able to stand me and my luggage. Therefore I had taken off my backpack and carried it across the bridge. If it should break in, I would at least have the chance to get out of the water. With the luggage strapped to my back, I would certainly not succeed. 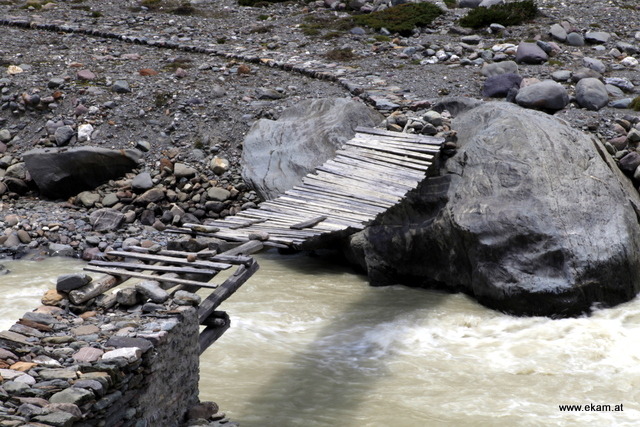 You pass over and over again such small, half deserted villages, in which almost exclusively only older people live. The younger ones have moved from the rough mountains to lower situated villages like Munsiyari or even to Delhi. 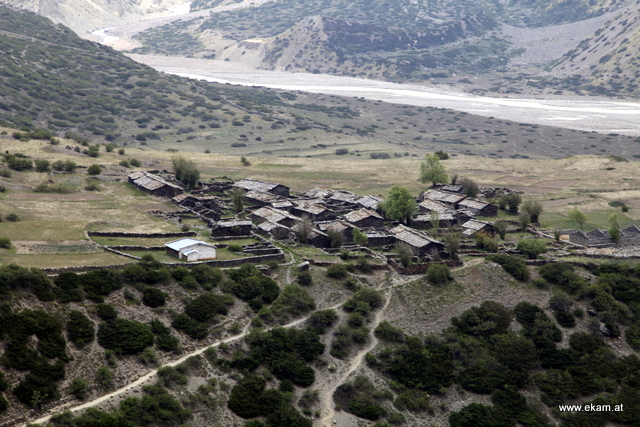 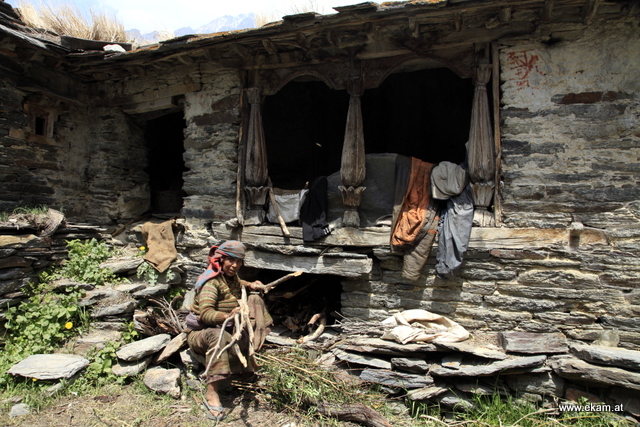 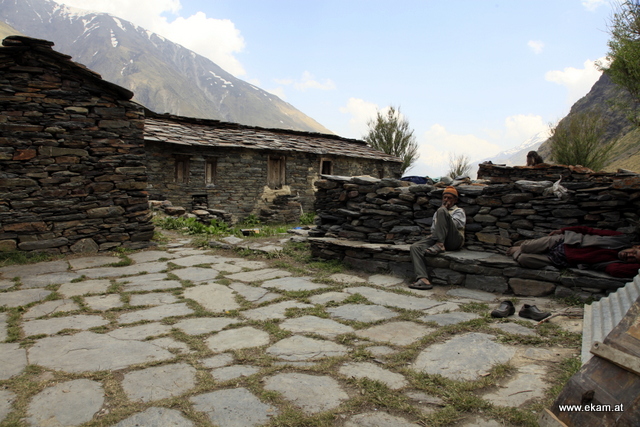 On the way up to the Nanda Devi Base Camp two old men came towards me, carrying a heavy load on their backs just like me. However, the two were certainly about 80 years old. 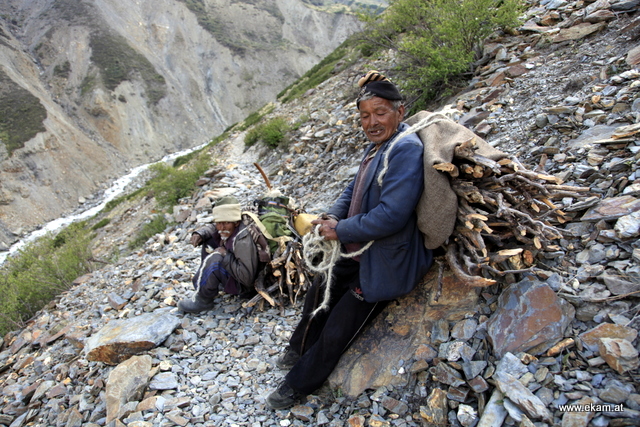 The base camp itself is nothing more than a wide plateau at about 4.000m, where shepherds with their flocks of sheep are staying – an ideal place for camping with beautiful views. 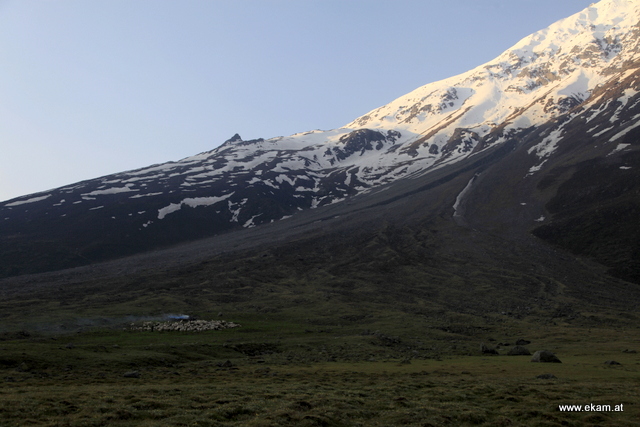 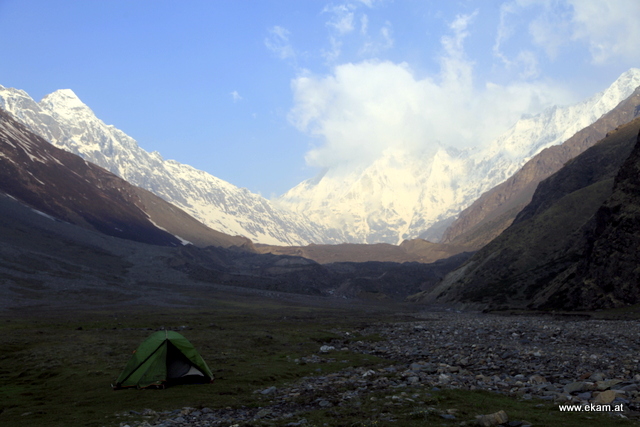 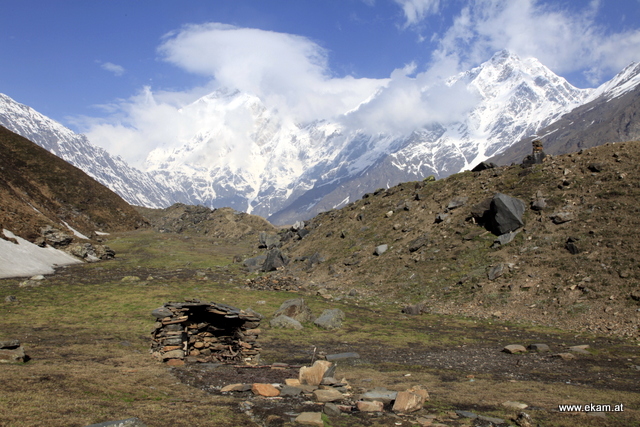 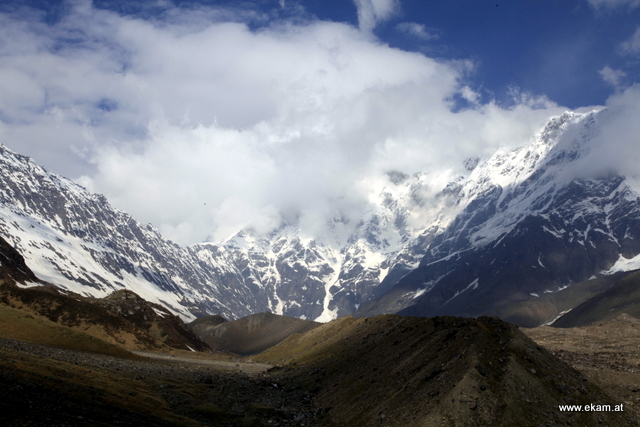 Even though I had climbed up to the Advanced Base Camp in the Nanda Devi glacier, I never got to see the top of the mountain early in the morning because of a cloud cover. The decision was for me if I should add another day to try again the next day. But after consultation with shepherds I decided to descend early. According to their statements this had been the case for several days, so the probability to see only a cloudy mountain in the next days was very high.

The descent went like clockwork, I had got used to this load in the meantime, so I was able to go down the last 36km to the first place by jeep to Munsiyari within 11 hours on the last day.

Further on we go to the source of the Ganges.
-Henry